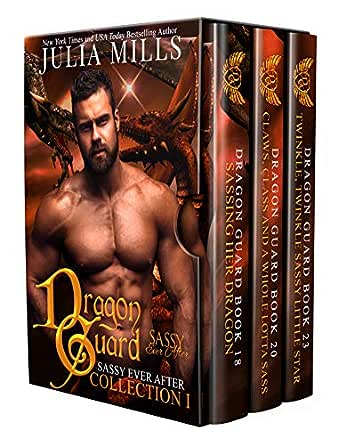 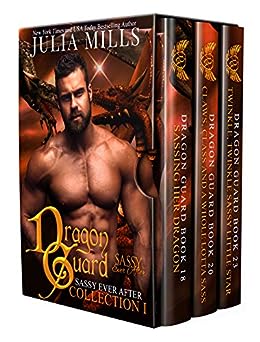 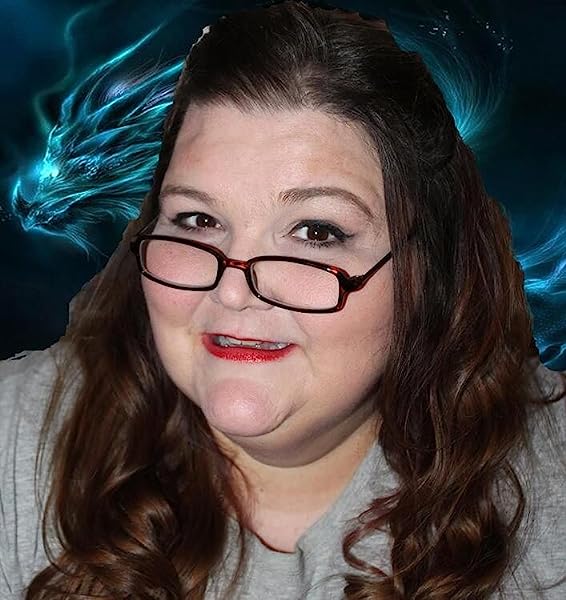 SASSING HER DRAGON
Loved the hero, not so keen on heroine.
My dislike of the heroine’s dithering behaviour in the first half, colours my review. Second half was great.
Authors have their own unique style and mixing them into another series world does not always come across as I would like it too.
I did not enjoy this book as much as the previous books in Ms Mills Dragon Guards and as I have read them all straight through over the last few weeks I have a good feel for this series.
I did not find Olivia sassy at all, just annoying.
If you have not read the Sassy Mates series you will not know who the Wolfe family are either.
Olivia is the sister of the alpha wolf Marrok we met in TEARS FOR HER DRAGON. She is dreaming about a man and hearing a voice every time she closes her eyes.
On a run as a guest of The Wolfe pack, they stumble across the body of a dragon in a mudslide.
Olivia knows straight away this dragon is her mate but doesn't say anything even though the poor Dragon is in a bad way. I could never get my head around the lame excuse used for her not saying anything.
I was annoyed with Olivia and her dithering, wanted to slap her silly.
For goodness sake she is a wolf and knows fated mates exist so WHY is she being an idiot and dragging her feet. Her wolf is telling her the dragon is her mate but she doesn't even phone her brother straight away so he can pass a message on to the dragons and let them know a dragon has been found injured. What if the dragons could save him?
Olivia does eventually decide to phone her brother but only HOURS later and only after the dragon has stopped breathing.
Olivia cannot get hold of Marrok on the phone and does not mind link with him either. Sorry but someone's life is in danger and Olivia only thinks about herself and that she thought her mate would be a wolf.
It is only the fact I love this series and this author that I kept reading after this point.
After finally talking with Marrok, who basically tells her to pull her head out of her butt, YAH, and connect with her mate to help him, this story improved for me but my dislike of Olivia coloured my view of the rest of the story.
Lovely Angus, want to give him cuddles.
It was great to have another of our lost Dragon Guard Enforcers found and it was horrible what Angus had been subjected too.
Angus is a typical old fashioned sweetie dragon like the rest of his brethren, I loved the end where he was surprised by his brethren. Happy tears.
What had happened in the past and the fact wolves are also being part of the hunters was just scary.
I enjoyed the mating ceremony, the seven steps were interesting.

CLAWS CLASS AND A WHOLE LOT OF SASS
Ms Mills has tied her Dragon Guards extremely well into this Sassy Ever After kindle world series of Ms Taiden’s.
Found Dani a bit of a pain at first, why was she so antagonistic towards Wolfe? Never quite explained.
Wolfe is not a Dragon Guard I can remember but he fills the criteria needed for this role very nicely. Will have to go back and look for him.
The actual story itself was wonderful, full of action, conversation and interesting characters. Even the baddie was intriguing.
I do miss not having the official mating ceremonies anymore. I loved when we had them at the end of every book at the beginning of this series, it always made it seem more real and solemn.

TWINKLE TWINKLE SASSY LITTLE STAR
Good little addition to the DG series and the Sassy Ever After series
Star’s background story was another sad tale but Grey was a real sweetie.
Thanatos rears his ugly head again causing more problems for our Dragon Guards and our wolf friends.
Another good story in this series and I really loved the fact we had a proper Mating ceremony at the end. WONDERFUL.
Read more
Helpful
Report abuse
See all reviews

Denise Zielinski
5.0 out of 5 stars Loved it!
Reviewed in the United States on 26 May 2020
Verified Purchase
I loved this collection. Have me a taste of the Dragon Guard series. Can't wait to get even more of the books.
Read more
Report abuse
See all reviews
Back to top
Get to Know Us
Make Money with Us
Let Us Help You
And don't forget:
© 1996-2021, Amazon.com, Inc. or its affiliates