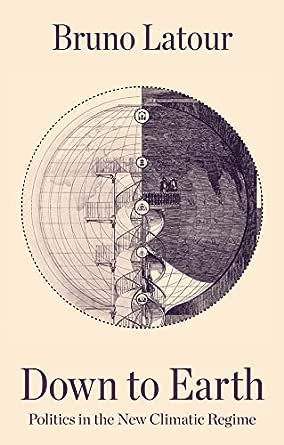 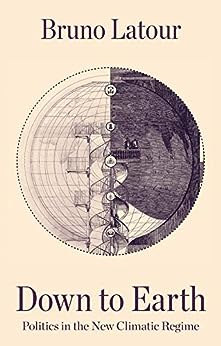 Down to Earth: Politics in the New Climatic Regime 1st Edition, Kindle Edition

"...Latour's most important contribution to current debates may be his untimely insistence on the importance of thinking universally in a post-universal world."
Los Angeles Review of Books

The present ecological mutation has organized the whole political landscape for the last thirty years. This could explain the deadly cocktail of exploding inequalities, massive deregulation, and conversion of the dream of globalization into a nightmare for most people.
What holds these three phenomena together is the conviction, shared by some powerful people, that the ecological threat is real and that the only way for them to survive is to abandon any pretense at sharing a common future with the rest of the world. Hence their flight offshore and their massive investment in climate change denial.
The Left has been slow to turn its attention to this new situation. It is still organized along an axis that goes from investment in local values to the hope of globalization and just at the time when, everywhere, people dissatisfied with the ideal of modernity are turning back to the protection of national or even ethnic borders.
This is why it is urgent to shift sideways and to define politics as what leads toward the Earth and not toward the global or the national. Belonging to a territory is the phenomenon most in need of rethinking and careful redescription; learning new ways to inhabit the Earth is our biggest challenge. Bringing us down to earth is the task of politics today.
See all Product description

TCh
1.0 out of 5 stars Exasperatingly pedantic
21 December 2018 - Published on Amazon.com
I read the NYT Magazine's profile on the man. Was impressed by his (or rather, the article's) ideas: Science as a human endeavor that is not exempt from bias -and impossible to exercise with pure objectivity. Started watching the man's presentation in youtube. Too obscure. Lots of terms that needed prior familiarity with this work. I gave him another shot. "Let's read the man's ideas in paper. They HAVE to be clearer. After all, he's one of the worlds most recognized sociologist/scientist. If he's that recognized, he must be very compelling and persuasive."

Boy was I wrong. If a book could select the most sarcastic name for its own content, "Down to Earth" would be it. Name happens to be totally trollish, actually. This 100-page essay is ANYTHING but down to earth folks. Convoluted, obscure, abstract, ethereal, shoehorned, circular, ornate, baroque, repetitive, conceited, circular, arrogant, repetitious, and circular. Did I mention circular?

Here's the gist. Modernism? Wrong. Earth? Damaged. People? Betrayed. Traditions? Irrecoverable. But to solve all this, shoot for this trippy, impossible-to-describe "ideal" world called "the Terrestrial". Don't bother understanding what it means. Latour doesn't either. Something about recognizing earth's reactions to human-induced damage? A new political realignment? Still don't get it? He'll draw comically bad figures for you. Imperfect little circle means "the Local", you see. Little arrow towards a tiny Globe means globalization. Get it? It goes from Local towards Global. But it's not that simple. It never is. Here's another figure so you really get it. In it, the same 2 circles, like in the past figure, but this one has another, solid, imperfect tiny circle (this one forming the third angle of a triangle!) and that's the "Terrestrial". Not the Global. That's bad, remember. Terrestrial is... how can I explain? Do you smell it? It's that je ne se quoi. Kind of political, but it's not, because it can't be pinpointed. But it definitely has no borders. And hear the trees, please. And the bacteria. And ISIS terrorists? But the soil, man. It can feel too. And then you land somewhere. Because, something something migration. Because you're running from... colonialism? No. You're running from ecological catastrophe. Just don't call it Ecological. Because it's... not that. Instead, call it "System of Engendering". No... "Nature as Process". No... Lovelockian objects. And don't watch it from Sirius. That's too far from earth. Or is it Earth? Anyway... I digress. THAT's what the Green Political Parties got wrong, OK? They didn't get it, apparently. Never excited people. Unlike the Marxists. Whose definition of social classes still stand the test of time. But anyway. Back to migrations: good for you! You're invading the invaders. Not "you", you. But the people. And the cockroaches? Yes, the cockroaches. Also: it's not your fault. It's Europe's. Which has no power these days. Abandoned by the US. Boo hoo. But it deserves what's coming to them. Because they pushed politics on the world. And they also pushed... science? Yes, the science seen from Sirius (the bad one). Oh, and they plundered too. But they didn't know better, so cut them some slack. And hey, they want to make amends, OK? Refugees welcome.

Excruciating, painfully fuzzy. Devoid of data. Absolutely lacking tangible stuff. The one aspect that kind of intrigued me a little going into it was the hope to read more details about the layer of planetary soil which is the giver of life (which I had heard of in the youtube talk). Disappointingly, Latour barely mentions it.

Sorry you had to read this.
Read more
51 people found this helpful

Mihal Ceittin
5.0 out of 5 stars Who speaks for the Earth?
15 December 2018 - Published on Amazon.com
Verified Purchase
This is a brilliant, motivating essay that is accessible and to the point: as no one is speaking up for Mother Earth she will speak for herself, with all that implies. Latour is calling for a new political orientation, one that is neither obsessed with protecting profit, nor overly focussed on economic redistribution. We need a radical center that is dedicated to preventing us from going over the environmental cliff. Should be read by up and coming politicians because this will be the only issue that really matters sooner than we think.
Read more
18 people found this helpful

Epimetheus
5.0 out of 5 stars Worth the effort
3 December 2018 - Published on Amazon.com
Verified Purchase
A good contribution to an important topic. Like so much of Latour’s writing, it would be better if it was written in an inviting and accessible way for a larger audience. As it is, few are going to benefit from the text.
Read more
15 people found this helpful

Richard Valasek
5.0 out of 5 stars Latour at his most down to earth
25 April 2019 - Published on Amazon.com
Verified Purchase
If not trained in the discipline, reading Continental Philosophers is no an easy enterprise. Latour generally is one of the more accessible but still not an easy task. He is well worth the effort. Down to Earth may be a good book to start with as it is also his most "down to earth" writing. Human activity is warming the planet and radically changing the climate. Those who have been leading and feeding the deniers are in the vanguard of those who know that it is true and they no doubt believe that the wealth they are accumulating as a result of pushing the change will protect them and "cleanse" the planet of "all those others." Unfortunately the accumulators of wealth are so single focused that they tend not to be very smart. They probably skipped reading Poe's Masque of the Red Death.

If things feel "left out" of this slim book it is because it contains a lot of arrows pointing to others: Donna Haraway, Anna Lauenhaupt Tsing, all of Latour's other work, Michel Serres. This book is a good nodal entrance to a compelling network of ideas and possible solutions. As Latour himself puts it in this book (pg 13, Kindle edition), "If it is a matter of multiplying viewpoints so as to complicate all “provincial” or “closed” views with new variants, it is a fight that deserves to be fought. If it is a matter of decreasing the number of alternatives regarding the existence and the course of the world, the value of goods and the definitions of the Globe, it is clear that we have to resist such simplifications with all our might."
Read more
8 people found this helpful

MFGreene
5.0 out of 5 stars insightful
19 March 2019 - Published on Amazon.com
Verified Purchase
enlightening
Read more
One person found this helpful
Go to Amazon.com to see all 11 reviews 4.1 out of 5 stars
Get FREE delivery with Amazon Prime
Prime members enjoy FREE Delivery and exclusive access to movies, TV shows, music, Kindle e-books, Twitch Prime, and more.
> Get Started
Back to top
Get to Know Us
Make Money with Us
Let Us Help You
And don't forget:
© 1996-2020, Amazon.com, Inc. or its affiliates