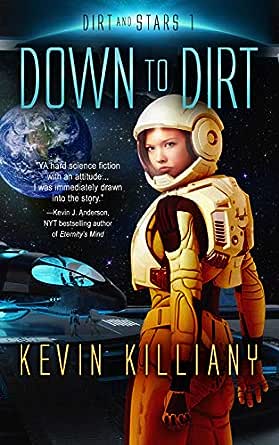 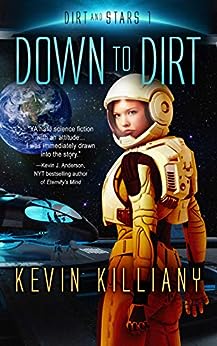 Down to Dirt (Dirt and Stars Book 1) Kindle Edition

AUTHOR: I began writing in 1967, right after I started reading, and--if you overlook thousands of rejections and thirty-three years of practice--was an immediate success. Since my first sale in 2000 I've sold three novels, a half-dozen novellas, and thirty-one short stories. I've also co-written or co-edited nineteen role-players' resource and rule books. My writing is fueled by two questions: "What happened?" and "What if?" The first motivates my exploration of lesser-known history, and the second drives my speculations about how our world would be changed if we had chosen differently. From those two streams my stories flow.

EDITOR: Some say I was born with a red pen in my hand, so it's no surprise that my penchant for words and stories ultimately led to a career in writing and editing. My literary tastes vary, but I largely gravitate toward genre fiction. I'll read anything sci-fi, fantasy, horror, western, and so forth. Some of my favorite contemporary authors are Dan Simmons, Chuck Wendig, David Brin, George R. R. Martin, and John Scalzi. --This text refers to an out of print or unavailable edition of this title.

Dr. Robert Rich
5.0 out of 5 stars Kids will enjoy this alternative history
Reviewed in Australia on 15 January 2019
In a fun way, this book is about culture clash. We read entries in the journals of three very different teenage girls. From the first few words, there is a lot of understated humor. For example, “child abuse” very quickly turns out to be inoculations, because a girl born on space station is made to visit relatives on Earth.
The reality this story is set in has a different history. The USA has monopoly in space. Its colonies there were established at a time of out and out racial discrimination. While that has eased down in the “dirt,” the Space Agency is thoroughly racist, and brainwashes its children accordingly.
The other two girls are “twins” within their hearts, although one is a freckled redhead, the other “carob color.” The theme is how the visitor from space learns the truth about “dirt,” and about people different from herself. This is a story most youngsters will enjoy, and perhaps they won’t even notice that they are taught lessons.
The only thing I object to is that the baddie is approximately from my part of the world, but I won’t do a spoiler by explaining.
Read more
Helpful
Report abuse
See all reviews

jason hansa
5.0 out of 5 stars Read this book! A coming of age tale for 3 girls in an US alternate future.
Reviewed in the United States on 30 June 2016
Verified Purchase
Okay, up front, I'm a beta reader. But I'm unpaid, so I get no credit for a good review :-) And I'm giving this a great review because that's what this book earned.
This is an alternate history in which America told the world to piss-off after WW2 and took to the stars. The rest of the world went to hell while America looked inward, and the civil-rights era got delayed by about 20 years. That's the background.
The story is about a girl forced to take a vacation with her relatives down on "dirt," what the sassy teens of the future on space-stations call mother Earth. She comes down, and learns hard lessons.
She's staying with her cousin, and meets her cousin's best friend, Jael, a female POC and one of the 3 main leads. Yes, all three, the POV of the book is diary entries written by all three girls. Mara must fight to overcome her basic prejudices against Dirts, POCs, the constant pressure of gravity, all while trying to fit in.
This is a coming of age story for the girls, it's a fight against institutionalized racism, it's about girls trying to find their dreams out in the inky blackness of space.
So, that should make you want to read this book. But, if you haven’t read anything by the author yet, get ready for a treat! I've read several of his short stories and his "Wolf Hunters" novel, and he has a way with words, with crafting sentences, that gets the point across exactly. He catches the nuances, and you really feel as if you’re watching a girl experience wind for the first time. He also infuses this with just enough hard science to please fans of that genre without making it burdensome for those of us who hand-wave it away in a novel.
Read more
5 people found this helpful
Report abuse

Amazon Customer
5.0 out of 5 stars Interesting, Creative, and Thoughtful--This book is worth your time!
Reviewed in the United States on 22 July 2016
Verified Purchase
Whether or not you are a science nerd or sy-fy tech geek this story is worth reading. Three teen-aged girls from different backgrounds share experiences of family, friendships, school, dating, racism, elitism and assault. One of their group, Mara, has lived on a space station her entire life and has excelled in meeting and surpassing all expectations. When her parents send her to earth (or Down to Dirt) to spend time with relatives her prejudices against all people who live on Earth are revealed as well as the difficulties of living with constant gravity. This story provides a fascinating approach to the issues of bias, elitism and racism but also depicts how three girls standing together,supporting each other can overcome difficult events. I recommend this book to all. If you are not a sy-fy tech geek don't let that deter you from giving this story a chance. You won't be disappointed!
Read more
4 people found this helpful
Report abuse

AC Smith
5.0 out of 5 stars A "golden age" juvenile, transformed for the 21st Century
Reviewed in the United States on 23 April 2017
Verified Purchase
I came to this based on a recommendation from a writer friend.
I'm of an age that cut my teeth reading Fred Pohl/Jack Williamson and Robert Heinlein juveniles in my junior high school library.
From the open, this feels very much like a novel cut from that cloth. But it quickly becomes apparent that there is more in play here than 1950s style fantasizing about boys with slide rules saving the galaxy.
Issues of race and gender do raise their heads, which is bound, I suppose, to disturb the "Puppies" among the readership. But IMO those subplots are precisely what give the story enough heft to hold its own as a novel in the new millennium.
I do certainly spend the bulk of my time reading "grown up" books these days (hell, I spent most of my time in adult fiction even when I *was* 12 or 13), but I can still enjoy a well built YA as well.
Especially recommended for anyone gifting a girl with a certain penchant for science and SF reading to encourage her to pursue her STEM interests. Fire those young imaginations!
Very much looking forward to the next in the "Dirt and Stars" series.
Read more
2 people found this helpful
Report abuse

Amazon Customer
5.0 out of 5 stars This is my new favorite book
Reviewed in the United States on 7 December 2016
Verified Purchase
I am having trouble finding the right words to express all of the things I love about this book.

I was unsure about the author's decision to write in a first-person-journal style but it gave each character incredible depth. It must have been an incredible task to create three distinct "voices" with varying sensibilities and levels of self awareness. In almost no time at all I could tell which of the three girls' journal I was reading based on style alone (as opposed to noting which character's name began each chapter).

The universe is well constructed. Instead of over-explaining every aspect of the alternate reality, Killiany gives great detail with respect to the tangible aspects of the universe while letting the historical and social aspects unfold organically. I cannot fully explain just how elegant the universe is without spoiling parts of the story that I thoroughly enjoyed.

I highly recommend this book to anyone who enjoys reading. While the story is technically science fiction, this book is about people and it does not sacrifice character development or plot in the name of science.

It is worth noting that the author's interview and message at the end of the book give insight into how he was able to understand the many sides to complex issues. I usually do not read these types of things but I was not ready for the book to be over so I just kept reading. I am glad I did as the author provided some powerful responses that made me even more excited for what the future of this series holds.

My only complaint about Down to Dirt is that it ended. I look forward to the next installment.
Read more
2 people found this helpful
Report abuse
See all reviews
Back to top
Get to Know Us
Make Money with Us
Let Us Help You
And don't forget:
© 1996-2021, Amazon.com, Inc. or its affiliates