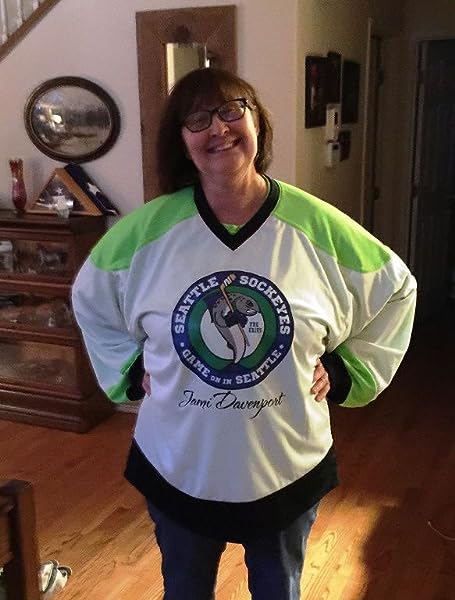 Down by Contact: A Seattle Lumberjacks Romance Paperback – 27 March 2013

by Jami Davenport (Author)
4.5 out of 5 stars 33 ratings
See all formats and editions
Sorry, there was a problem loading this page. Try again.
Read more Read less

An advocate of happy endings, Jami Davenport writes sexy romantic comedy, sports hero romances, and equestrian fiction. Jami lives on a small farm near Puget Sound with her Green Beret-turned-plumber husband, a Newfoundland cross with a tennis ball fetish, a prince disguised as an orange tabby cat, and an opinionated Hanoverian mare. Jami works in IT for her day job and is a former high school business teacher and dressage rider. In her spare time, she maintains her small farm and socializes whenever the opportunity presents itself. An avid boater, Jami has spent countless hours in the San Juan Islands, a common setting in her books. In her opinion, it is the most beautiful place on earth.
Tell the Publisher!
I’d like to read this book on Kindle

Amazon Customer
5.0 out of 5 stars Loved it
Reviewed in the United Kingdom on 20 October 2013
Verified Purchase
Could not put this book down, read another Seattle Lumberjacks book and loved it and could not wait to read another. Really like when I find an author like this can't wait to read more of her books.
Read more
Report abuse

Rosemarie McManus-McGowan
5.0 out of 5 stars The set of books is a must .
Reviewed in the United Kingdom on 22 May 2013
Verified Purchase
I read Fourth and Goal , Forward Passes & Down by Contact . I really enjoyed these books 5 stars to all 3 books I hope there's more books in this series.
Read more
Report abuse

jacqueline hall
5.0 out of 5 stars Down by contact(Seattle lumberjack)
Reviewed in the United Kingdom on 2 March 2014
Verified Purchase
So glad that that Kelsey and Zach got together and had a happy ending and all the other characters got to be happy as well
Read more
Report abuse

Alison
5.0 out of 5 stars Good read
Reviewed in the United Kingdom on 12 April 2014
Verified Purchase
Just started reading Jamie davenport, I glad the first book was free as this got me on to this author, I will keep buying her book as I enjoyed it
Read more
Report abuse

NancyW
5.0 out of 5 stars Touching story... (4-1/2 stars)
Reviewed in the United States on 26 April 2013
Verified Purchase
This is probably one of the most decent sports themed (in the football realm of things) books I have read, as well as probably one of the most touching stories of growth written. Just reading about Zach's character and the genuinely kind man that is scarred from vicious words and a torrential childhood, broke my heat. His insecurities almost made me want to just hug the man and tell him that he is more special than he could possibly think he was. Even my heart broke for Kelsey's character. While her youth was misguided and it appeared that Karma reared her ugly head in her direction, I managed to feel proud of her in her journey to make amends with her past and with the one she knew she hurt the most. I truly rooted for these two throughout the book and was very pleased with the ending.

Of course, I did feel that the story dragged a little in places, but my issue with that was quite mild once all the story was told. I will say that the bumbling ways of Zach really touched me to where I actually cried in parts of this book. Definitely recommendable to a friend and I do strongly urge for others to read this book!
Read more
3 people found this helpful
Report abuse
See all reviews
Back to top
Get to Know Us
Make Money with Us
Let Us Help You
And don't forget:
© 1996-2021, Amazon.com, Inc. or its affiliates