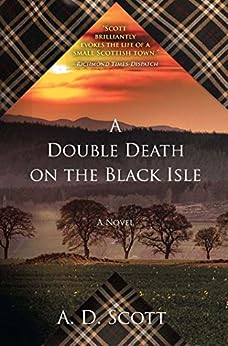 "Scott's writing is engaging, and her plotting Macbethian. The characters of the crusading small-town newspaper are skillfully drawn and will have readers rooting for them unequivocally." --Booklist

"Readers...should enjoy Scott's careful attention to creating characters who convincingly belong to a past era's attitudes and values." -Publishers Weekly

"Set against the bleak beauty of the Highlands, Scott's second (A Small Death In a Great Glenn, 2010) continues to explore the slow transformation of Scotland from a highly ordered society while presenting a fine mystery with engaging characters." --Kirkus Reviews (starred)

"Another stunner...Lots of action, lots of atmosphere, and above all, lots of fun." --Booklist (starred)

"As patrician and working classes prepare to do battle, Scott's well-written mystery is lyrical and arresting." --Curledup.com (blog)

"The characters are engaging, and the suspense mounts along with a growing sense of dread as events surrounding the death of a young boy unfold." --Peter Robinson "This mystery is a delight to unravel, with its lively dialect-sprouting players, inhabiting a lavishly described, forbidding but beautiful landscape." --Kirkus "Oh, what a delight, this book! Almost perfect in every way." --William Kent Krueger "Brims with an intimate knowledge of the Scottish Highlands...a novel to savor."" --Malla Nunn "An impressive first novel...Scott uses the background of religious intolerance, prejudice and petty jealousies, to bring together an engaging cast of warm and colorful characters." --Ann Cleeves --This text refers to an alternate kindle_edition edition.

A.D. Scott was born in the Highlands of Scotland and educated at Inverness Royal Academy and the Royal Scottish Academy of Music and Drama. She has worked in theater and in magazines, and is currently writing the next book in the acclaimed Highland Gazette mystery series. --This text refers to an alternate kindle_edition edition.

4.3 out of 5 stars
4.3 out of 5
40 global ratings
How are ratings calculated?
To calculate the overall star rating and percentage breakdown by star, we don’t use a simple average. Instead, our system considers things like how recent a review is and if the reviewer bought the item on Amazon. It also analyses reviews to verify trustworthiness.

Heather Isdale
5.0 out of 5 stars Couldn't put the book down
Reviewed in the United Kingdom on 6 September 2013
Verified Purchase
As a Scot who lived through the era of the book I found it fascinating. It brought back many memories of times gone by, e.g. the use of typewriters rather than computers. Very well written but spelling, of course, North American, due to the background of the author. Very good and believable characterisation and plot that held my attention throughout the book.
Read more
One person found this helpful
Report abuse

Peter Somerville
2.0 out of 5 stars Two Stars
Reviewed in the United Kingdom on 7 May 2018
Verified Purchase
not my type of novel
Read more
Report abuse

shonagh hay
5.0 out of 5 stars great storylines
Reviewed in the United Kingdom on 28 October 2013
Verified Purchase
I was given this book as a birthday present and have now read all four in the series! They are a wonderful reflection on times past in Highland Scotland and coupled with great storylines with twists and turns of plots. I would recommend to anyone who likes a good mystery.
Read more
Report abuse

S. Collick
3.0 out of 5 stars only so so by comparison
Reviewed in the United Kingdom on 18 April 2015
Verified Purchase
I've read the first 5 of the series and this is the slowest of the lot. The others are all 5 stars by my reconning. All very good!
Read more
Report abuse
See all reviews
Back to top
Get to Know Us
Make Money with Us
Let Us Help You
And don't forget:
© 1996-2021, Amazon.com, Inc. or its affiliates