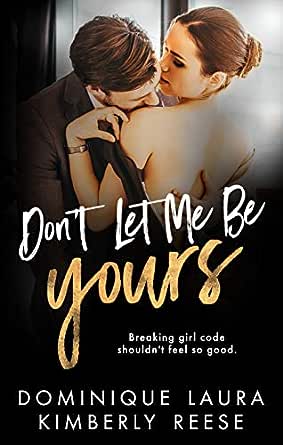 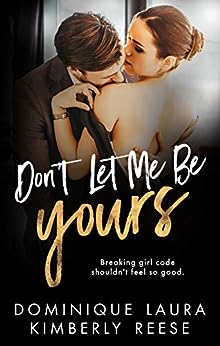 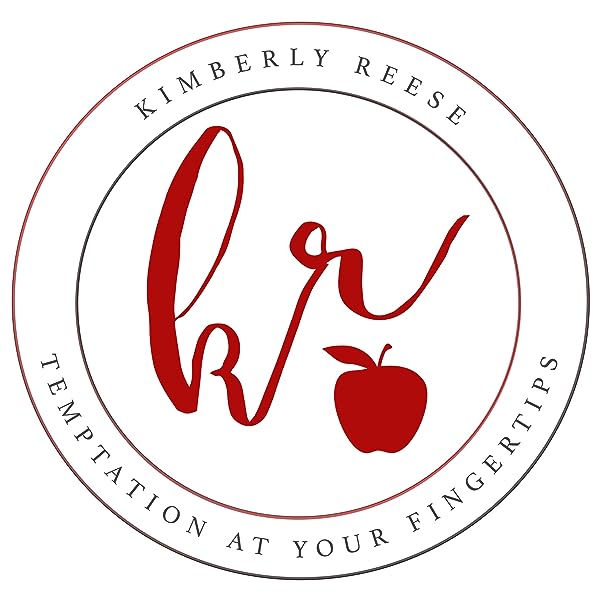 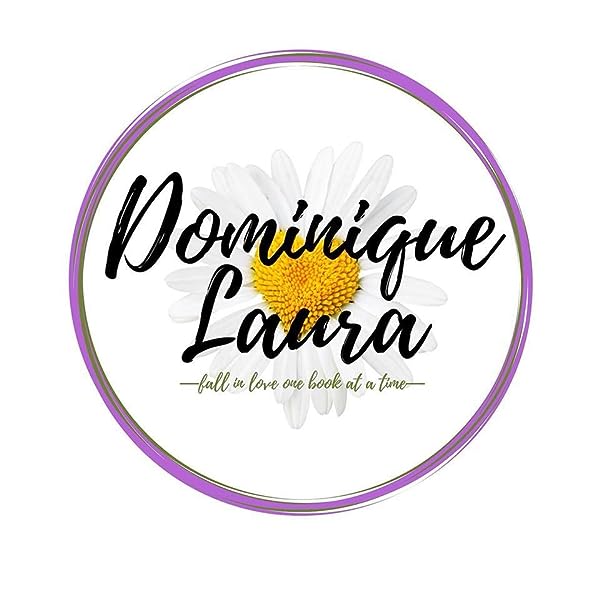 Don't Let Me Be Yours Kindle Edition

Jules B
TOP 1000 REVIEWER
4.0 out of 5 stars Very well written and great characters
Reviewed in Australia on 1 November 2018
Verified Purchase
As far as books go, anything with cheating usually isn't my taste. But I read this because I absolutely devoured Kimberly Reese's 2 other books so I felt I needed to give it a go.
I am glad I did. It was fabulously written and while it did focus on a topic that I am not overly comfortable with, I did enjoy the majority of it.
A strong, fiesty and independent woman falls for the alpha billionaire. Whats not to like?! But this story does go deeper and it explores the guilt, anger and rejection that usually follows an affair.
Give this book a go. Its worth it.
Read more
Helpful
Report abuse

Anita_booktoread.
TOP 500 REVIEWER
5.0 out of 5 stars This is brilliant!
Reviewed in Australia on 16 September 2019
Perrie is a strong Latino woman who has worked hard to get where she is in life. And with a friend beckoning for her to be a wingwoman, she’s about to dabble in love too.

Sterling comes from old money and people who work hard because that is what is required of them. However, he has somehow managed to get himself tied to a woman who only wants stature. They have an on-again, off-again relationship that Sterling is tired of. This woman is also Perrie’s childhood best friend.

Perrie and Sterling find each other in a bar one night, and on recognition of the other, agree to just become friends. But that’s really hard to do when their chemistry is off the charts. But with a conniving ex/best friend to deal with as well, they’ll just have to take what they can.

Terri T.
TOP 500 REVIEWER
4.0 out of 5 stars Enjoyable !!!
Reviewed in Australia on 24 August 2018
I did enjoy this book, at times it was certainly entertaining and I thought it was well written. The subject is one of my favourite genres, love triangles and cheating.

Sterling and Rachel are a couple of sorts, both come from powerful rich families and it was just assumed they would get together and eventually marry; two powerful family names joined, a match made in heaven. That is until Perrie makes an appearance, she is Rachel's childhood friend and she is about to throw a spanner in the works.

I really couldn't quite connect with Sterling's character as much as I would have liked, he just didn't do it for me, he was too abrupt and hard faced. He needed to show his sensitive loving side more often and that didn't happen. Perrie was a feisty lady who doesn't take any crap off anyone and knows what she wants out of life but I found that as the book went on she became weak and whinny and that disappointed me. Rachel was an awful character; snobby, stuck up, spoilt and rude, she really grated on me.

The premise of this story was a good one and had real potential but this book didn't wow me like I hoped it would. I just couldn't feel the connection that I wanted to with the characters. Still it's worth a read
Read more
Helpful
Report abuse

lorniebee
5.0 out of 5 stars 5 stars of drama
Reviewed in Australia on 24 August 2018
whats not to love about this book , feisty independent women falls for the hot alpha sometimes cold billionaire but there is so many twists barriers to their relationship that definitely keeps you on your toes . At times you will hate Sterling and love Perrie then you will reverse your feelings . They best friends are funny and instantly loveable and a villain you will just love to hate. Sterling and Perrie's story is a change turner that will keep you up all night but it will be worth it!
Read more
Helpful
Report abuse

Gem
5.0 out of 5 stars Page turner
Reviewed in Australia on 24 August 2018
I loved the pace of this book, it definitely kept me turning the pages! I really loved how strong the female character Perrie was and Sterling was a hot dominant alpha!
Read more
Helpful
Report abuse
See all reviews

Brenda Travers
5.0 out of 5 stars Five Sizzling Stars ⭐️ ⭐️⭐️⭐️⭐️
Reviewed in the United States on 24 August 2018
Verified Purchase
From the Blurb and the teasers I was so ready to read “Don’t Let Me Be Yours” and it did not disappoint. It was thoroughly well written by Kimberly Reese & Dominique Laura and I loved the storyline.

In Don’t Let Me Be Yours you meet Sterling Montgomery & Perrie Ayala their Story is is fuelled with Angst, Sizzling Sexual Tension that’s off the charts and loud out moments that will very quickly have you addicted. I couldn’t help but fall for Sterling he was full time sexy CEO and part time arrogant alpha but he was the kind you couldn’t help but be drawn to. Perrie challenges Sterling in ways that he finds refreshing. She’s sassy, fresh, sometimes adolescent but breathtakingly gorgeous, only problem is she’s not his and thats where the problem lies. I thoroughly enjoyed their banter and their journey, there were some definite roadblocks for them. I was intrigued and captivated with their story, I had those heart beat out of your chest moments when things don’t go a certain way for our leads.

Kelly G.
5.0 out of 5 stars My 💜 for this book cannot be measured in only 5 🌟... But it will have to do!
Reviewed in the United States on 24 August 2018
Verified Purchase
THIS. BOOK!!!!!
My heart is still fluttering!!! Sterling and Perrie are freaking hot and awesome!!! I was waiting forever for this book (at least it FELT like forever to me) and I was so NOT disappointed. I was left totally breathless on more than one occasion! Blake is the next friends every girl should have. Rachel is the girl you love to hate and hope for get painful demise! Cooper is just as laid back as Sterling is wound up. The supporting characters are fantastic. I loved everything about this book. I sent some angry messages. I yelled at my husband for distracting me. I didn't want to put it down. I HAD to finish it even though I really wanted more time with Sterling and Perrie! 💜. Great book. Y'all need to get it now!!!
Read more
3 people found this helpful
Report abuse

Keri Loves Books
4.0 out of 5 stars She Was The Only Thing That Felt Right, Even When It Was Wrong
Reviewed in the United States on 24 August 2018
Verified Purchase
When you least expect it, love can find you!

Sterling’s whole life has been laid out for him. However, the girlfriend he’s had on and off for years...he’s finally done with her.

If only his ex could accept that it’s over.

Perrie happens to be his ex’s best friend. That’s kind of stretching the truth a bit, because Perrie doesn’t even really like the person her once bff has become. But this connection is what brings her to Sterling.

Perrie and Sterling share intense and crazy hot chemistry!!! All the while his ex is scheming and plotting to nail him down for forever!!!

Perrie and Sterling end up struggling with their attraction and need for one another. It’s a battle of what’s morally right and what feels the way it’s supposed to be.

The story definitely delivers on the heat! Lots of twists, deceit and a full serving of getting what you deserve! Sterling brings the alpha and a whole lot of JERK, but you’ll love him anyway! Enjoy this emotionally charged story.
Read more
2 people found this helpful
Report abuse

Lisa(New Hampshire)
5.0 out of 5 stars "Sometmes what's wrong feels so right."
Reviewed in the United States on 24 August 2018
Verified Purchase
Perrie didn’t mean to fall for the handsome stranger at the bar, but she was feeling great after a few drinks and he was on her radar. When she propositioned him, the twinkle in his blue eyes looked familiar, but she couldn’t place him. Then he uttered a name she was trying to forget, “Rachel”, and she knew who he was; Sterling Montgomery, her best friend Rachel’s boyfriend. He immediately told her they had broken up, but that didn’t matter. She would never hook up with her friends ex-boyfriend, even though her body was telling her to go for it. Maybe one kiss. What could it hurt?

Sterling recognized Perrie and her sexy body right away, and he was psyched that she had approached him. She was the exact opposite of Rachel and he would love to get to know her better. He could definitely use a distraction to get the nightmare of Rachel off of his mind, so he decided to play along. He never chases women because they come to him and he is always in control in the bedroom. He wasn’t sure how far Perrie was willing to go but if he struck out tonight, he wouldn’t give up. She was temptation wrapped up in a petite, sexy package and he wanted to explore their connection.

The sexy and flirtatious banter between Perrie and Sterling is intoxicating and you never know what will happen next. The personalities of the characters jump off of the page and invite you into their fun and crazy world. This is the first collaboration between authors Kimberly Reese and Dominique Laura, and I certainly hope it is not the last.
Read more
3 people found this helpful
Report abuse

Rhonda
5.0 out of 5 stars 5 STARS FOR DON'T LET ME BE YOURS!!
Reviewed in the United States on 24 August 2018
Verified Purchase
5 STARS FOR DON'T LET ME BE YOURS!! This book was everything I look for in the perfect read. It was filled with sexiness, chemistry, great bantering, angst and fabulous characters. I absolutely loved Sterling, he was PERFECTION. Sterling and Perrie's story had lots of OMG moments and will push all your emotion buttons. These two authors did an amazing job with this book, make sure to one click this one. I am hoping we will see more stories with some of the other characters from this book.
Read more
5 people found this helpful
Report abuse
See all reviews
Back to top
Get to Know Us
Make Money with Us
Let Us Help You
And don't forget:
© 1996-2021, Amazon.com, Inc. or its affiliates