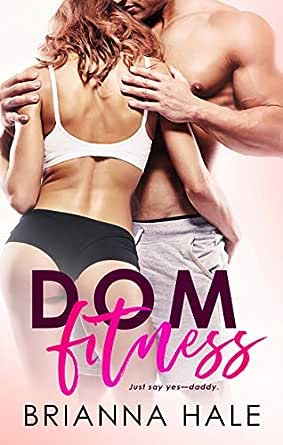 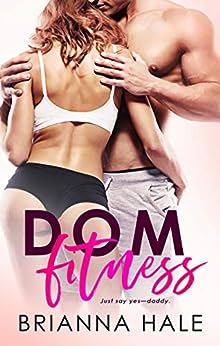 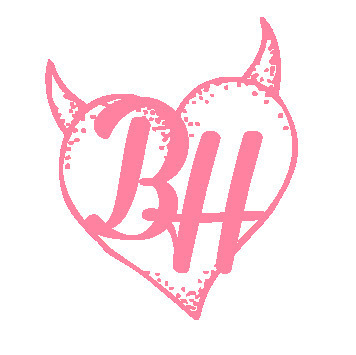 Working out has never been so hardcore…

Amelia Tate has never so much as breathed near an exercise bike, and yet her editor wants her to write a feature on Dom Fitness. The only problem? They won’t let her inside to interview the trainers unless she becomes a member herself. Fine! She’ll join. And then she’ll tell the world just how dumb Dom Fitness is.

To Amelia’s shock, being dominated by Dom isn’t horrible. In fact, it feels amazing, and she starts to crave him both inside the gym and out, even though that’s definitely against club rules. Pfft, rules? It’s not just Amelia that’s about to get bendy. Daddy Dom doesn’t call her his naughty brat for nothing.

Author's Note: Dom Fitness is a novella of 17,000 words and was previously published in the Dirty Daddies Anthology.

When Amelia was assigned the job to write a piece around this latest craze, she didn't imagine that she would actually have to work out. Especially with a PT that insists she calls him daddy.

Dom has been paired with a non believer and a sassy one at that. But this girl that reminds him of peaches will quickly realise that a firm hand is in order and that he's perfect for the role.

I have to admit, I'm a huge fan of this author. She has a knack of writing daddy kink elegantly without ever making it feel skeevy. This story was no different even though I didn't love the whole gym scenario. BUT from a fantasy perspective, Brianna Hale wrote it fabulously!

The hot mess library
TOP 500 REVIEWER
4.0 out of 5 stars An enjoyable read!
Reviewed in Australia on 21 March 2020
Format: Kindle Edition
Dom Fitness by Brianna Hale is a short novella read full of steaminess and sassy characters. The novella focuses on the characters Amelia Tate and Dominic Weston. Amelia is your hard working, starving artist. Working as a journalist at the bottom of the totem pole, she is sent out to write an article on a newly opened gym that is ran by BDSM Dominants. Not only has she not set foot in a gym in forever, it is one of the requirements for her in order to get her article done. To make it all work, Amelia needs to stop being her bratty self, or does she?

Dom is the CEO of the gym and even though he felt it was a good idea to set up a gym full of dominants, he is having second thoughts until the bratty Amelia enters the equation. She’s bratty enough to trigger his Dom side and he can’t wait to master her!

This was a really sizzling, quick read. The book mainly looks at the growing relationship between Dom and Amelia but also has a bit of background on why Amelia is in her job and what her passions are. With that there are a few ups and downs in regards to communication, but the story was a pretty fun read with lots of sexy scenes. The development of the relationship and characters was really quick and fast paced, but that is to be expected in a novella. Overall, this was a really enjoyable read!

gsmitty
5.0 out of 5 stars When he says jump, she says why...
Reviewed in the United States on 22 March 2020
Format: Kindle EditionVerified Purchase
I knew I was going to love this story before I even started reading it, and I only fell in love with it more as I finished devouring it! Dom and Amelia are EVERYTHING, stern daddy and bratty girl and all the wonderfulness in between as they overcome differences, judgements, and those pesky rules that can get in the way!
It's a wonderfully quickie of a novella, that will have you grinning and perhaps even just a little squirming in your seat as you wonder why there isn't actually a gym like Dom Fitness that you can join. I sure know it would work for me! I don't even think I need to fill out the questionnaire to know who I would need to be paired up with!
If you're looking for a fun, quick, and just a bit dirty read, showing that love can be found anywhere, and being true to yourself can really let you blossom, look no further!
Read more
One person found this helpful
Helpful
Sending feedback...
Thank you for your feedback.
Sorry, we failed to record your vote. Please try again
Report abuse

Audiobookhoe
5.0 out of 5 stars Submission and fitness! What a way to lose weight!
Reviewed in the United States on 25 March 2020
Format: Kindle EditionVerified Purchase
Surprisingly entertaining! I wasn’t sure at first because the premise of the gym seemed sort of silly and exploitive but this book reminded me a lot of Rebekah Weatherspoon’s Fit series(which I loved) only this book featured a Daddy Dom.

There was a lot of tension between the main characters Amelia and Dom and while this book wasn’t as great as her Soft Limits full length novel, for the price and length, I enjoyed it. I wished it had been longer because there was so much she could have done with the characters.

All and all, I loved it! If she made a series about this(especially with a female Mommy dom and a male brat) I’d be totally down for it!
Read more
One person found this helpful
Helpful
Sending feedback...
Thank you for your feedback.
Sorry, we failed to record your vote. Please try again
Report abuse

B.B. Florine
5.0 out of 5 stars Inner Brat Discovered
Reviewed in the United States on 21 March 2020
Format: Kindle EditionVerified Purchase
This was such a cute, fun read! The whole fitness theme caught my attention and I had to buy the book out of curiosity. Amelia and Dom were both really fun characters. I thought it was great how Amelia's boss set her up so perfectly to fall right into Dom's world and into his sexy, dominant hands. Another awesome book by one of my new favorite authors!
Read more
One person found this helpful
Helpful
Sending feedback...
Thank you for your feedback.
Sorry, we failed to record your vote. Please try again
Report abuse

Rhonda
4.0 out of 5 stars A totally different way of getting in shape! LOL
Reviewed in the United States on 20 March 2020
Format: Kindle EditionVerified Purchase
This was a cute but really hot story. It made me laugh in places and then got me feeling all the hotness in other places. I enjoyed the dynamics between Dominic and Amelia as they worked their way through their relationship.
Read more
Helpful
Sending feedback...
Thank you for your feedback.
Sorry, we failed to record your vote. Please try again
Report abuse