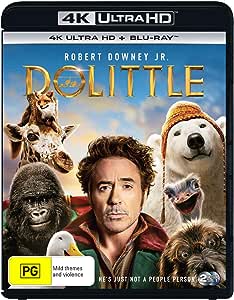 After losing his wife seven years earlier, the eccentric Dr. John Dolittle Downey, famed doctor and veterinarian of Queen Victoria’s England, hermits himself away behind the high walls of Dolittle Manor with only his menagerie of exotic animals for company. But when the young queen (Jessie Buckley, Wild Rose) falls gravely ill, a reluctant Dolittle is forced to set sail on an epic adventure to a mythical island in search of a cure, regaining his wit and courage as he crosses old adversaries and discovers wondrous creatures. The doctor is joined on his quest by a young, self-appointed apprentice Dunkirk’s Harry Collett and a raucous coterie of animal friends, including an anxious gorilla Oscar winner Rami Malek, an enthusiastic but bird-brained duck Oscar winner Octavia Spencer, a bickering duo of a cynical ostrich the Big Sick’s Kumail Nanjiani and an upbeat polar bear John Cena, Bumblebee and a headstrong parrot Oscar winner Emma Thompson, who serves as Dolittle’s most trusted advisor and confidante. Robert Downey Jr. electrifies one of literature’s most enduring characters in a vivid reimagining of the classic tale of the man who could talk to animals: Dolittle. The film also stars Antonio Banderas, Michael Sheen the Queen and Oscar winner Jim Broadbent and features additional voice performances from Oscar winner Marion Cotillard, Frances de la Tour, Carmen Ejogo, Ralph Fiennes, Selena Gomez, Tom Holland, and Craig Robinson.

E. A. Solinas
TOP 50 REVIEWER
1.0 out of 5 stars Didlittle
Reviewed in Australia on 18 February 2020
There have been two notable adaptations of Hugh Lofting's Doctor Dolittle books - a Victorian fantasy adventure, and a doofy Eddie Murphy comedy with plenty of scatalogical humor and wisecracking animals.

And the biggest problem with "Dolittle" is that it tries to be both of these things at the same time, which makes it both stupid and kind of bipolar - one minute it's trying to be a charming, quaint fantasy tale, the next it's making jokes about dogs sniffing butts. It's also a painful waste of a very talented cast, most of whom are playing animals with exactly one character trait apiece, but the biggest waste is obviously Robert Downey Jr.

As a very well-animated introduction explains, Dr. John Dolittle (Robert Downey Jr.) is a veterinarian who has the ability to speak to animals. But after the death of his wife, he locked himself away in a remote estate with his colorful array of animals, wanting nothing to do with the human race because... well, no good reason, actually. He just kind of does.

Years later, a kind-hearted boy named Tommy Stubbins (Harry Collett) accidentally shoots a squirrel, and takes it to Dolittle. Dolittle, it turns out, has become an insane recluse with mice living in his Old Testament beard. At the exact same time, Lady Rose (Carmel Laniado) brings news from Queen Victoria: she has become deathly ill, and needs Dolittle's help. And after Dolittle decides for purely selfish reasons to help, he discovers that the queen has been poisoned.

Since the only cure for the poison is a magical cure-all fruit from a far-off mythical island, Dolittle sets sail to find it - and of course his ship is entirely crewed by bickering, not-very-bright animals, as well as Stubbins (who jumped on at the last minute). Their only hope for finding the island is to head to a hostile pirate island and steal back a valuable journal, but Dolittle and Co. soon discover that they are being pursued by a British warship, led by Dolittle's rival, Dr. Blair Müdfly (Michael Sheen).

"Dolittle" is one of those movies that is just.... dumb. The setting and the overall arc of the plot seem to indicate that this is meant to be a quaint, enchanting, adventure-laden fantasy story. The sunlit, nature-draped setting of Dolittle's home (where carnivores somehow never eat any other animals), the dragon, the rambunctious pirate island, and scenes like Dolittle's ship being towed by whales - they all seem to be from a story concept that might have actually been good.

The problem is, the movie is dumb. For instance, the entire plot revolves around an assassination plot (using one of those convenient movie poisons that, if counteracted in time, does zero physical harm) to take the throne from Queen Victoria. The problem is, buying into this central plot point requires you to be really ignorant about Queen Victoria, and British primogeniture in general. It only succeeds in making the obvious villain look like a bumbling fool.

But the biggest source of stupidity is the animals. They are stupid. Each one has one character trait apiece (being scared, being angry, being French, saying "bro"), and most of them talk in anachronisms (such as quotes from "The Godfather" and "Rush Hour"). Not only do their idiotic interactions eat up valuable time that could have been used to actually tell the story, but the jokes are rarely, if ever, funny. For instance, there's a running gag that Dab-Dab the duck cannot tell medical instruments apart from vegetables. In its very first appearance, this joke is dragged out several times, until you just want to shriek "Cut cut cut!" at the screen.

And the quaint Victorian setting is somewhat at odds with the copious lowbrow humor, such as a tense scene involving a tiger that ends with testicular trauma, which is dragged out as if it were super-serious. And of course, the infamous scene involving a dragon's butt and bagpipes.

I usually love Robert Downey Jr's acting, so it is to my sorrow that I must report that he is shockingly bad in this movie - he gives a strangely affected, twee performance, with a head-scratchingly bad Welsh accent that makes him sound like he's doing an impression of someone else. And his personal charisma isn't enough to make Dolittle likable - he comes across as a nasty, selfish, childish man-child for most of the movie. Collett is so nondescript that he barely makes an impression, and Sheen gives a mad-eyed, hammy performance that screams "I'm in a bad kids' movie and I know it."

Pretty much all of the animals are played by big-name actors such as Rami Malek, John Cena, Selena Gomez, Ralph Fiennes, Tom Holland and Kumail Nanjiani, and except for Emma Thompson's Polynesia, it was a waste of money. None of them give a very good performance, and most of their voices aren't distinctive enough for it to have been worth the effort.

Its bipolar personality is probably the most memorable thing about "Dolittle" - aside from that, it's just another stupid lowbrow comedy aimed at children, on the assumption that they have no taste. Not worth watching.