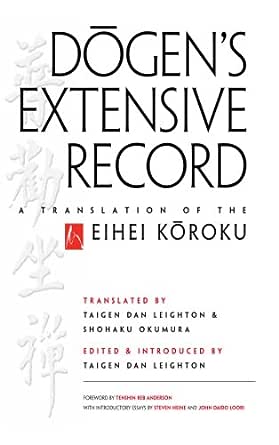 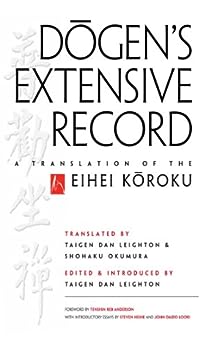 Leighton and Okumura have rendered Dogen's dense and idiosyncratic language in clear, lively, and engaging English. This is no small accomplishment. All readers will benefit greatly from this outstanding contribution to the study of Dogen and Zen Buddhism.--Philosophy East & West

The many hours of dedicated work [that produced the book] will be much appreciated by all of us now and in the future who value Dogen's inspired writing and talks.--Mel Weitsman, abbot of Berkeley Zen Center

This is a gem of a book that succeeds in conveying the warmth and compassion of one of Buddhism's great towering figures.--The Middle Way: Journal of the Buddhist Society

This is a significant time in terms of understanding Dogen in the West, [with] Taigen Dan Leighton and Shohaku Okumura's translation of the Eihei Koroku coming out. People are going to see an entirely different style in this collection of Dogen's later teachings.--Steven Heine, Director, Institute of Asian Studies; co-author of Buddhism in the Modern World, in the forum-style article, Understanding Dogen, in Buddhadharma

This massive work will be a valuable asset not just for students of the Zen teacher Dogen (1200-1253), but for all students of Zen and Buddhism in general. In short, Leighton and Okumura's translation of Dogen's Extensive Record is a valuable contribution to the growing body of Zen literature available in English. It allows Western readers to discover a new side of Dogen, the side he presented to his own students on a daily basis. It will reward careful study.--William M. Bodiford, in Buddhadharma: The Practitioner's Quarterly

This new and hefty volume represents the [previously unseen] other half of Dogen's teaching. We owe a great debt to Taigen Dan Leighton and Shohaku Okumura for this monumental translation, a labor of love and a generous offering to those who choose to wander beyond the beaten path.--Inquiring Mind

Eihei Dogen founded the Japanese Soto School of Zen, and is renowned as one of the world's most remarkable religious thinkers. As Shakespeare does with English, Dogen utterly transforms the language of Zen, using it in novel and extraordinarily beautiful ways in his voluminous writings. Born in 1200 to an aristocratic background, he was ordained a monk in the Japanese Tendai School in his early teens, but became dissatisfied with Japanese Buddhism. After traveling in China from 1223 to 1227, he returned to introduce to Japan the Soto lineage and the large body of Chan teaching stories, or koans, which he had thoroughly mastered. From 1233 to 1243 he taught near the cultural capital of Kyoto, then in 1243 moved to the remote northern mountains and founded the temple Eiheiji, still one of the headquarter temples of Soto Zen. There, until his illness and death in 1253, he trained a core group of monks who spread Soto Zen throughout the Japanese countryside. Dogen's writings are noted for their poetic and philosophic depth, though aimed at spiritual practitioners. His two major, massive works are Shobogenzo (True Dharma Eye Treasury) and Eihei Koroku (Dogen's Extensive Record). Although not studied for many centuries aside from Soto scholars, in modern times Dogen's writings, through translation, have become an important part of the spread of Buddhism in the West. Taigen Dan Leighton, Soto Zen priest and successor in the Suzuki Roshi lineage, received Dharma Transmission in 2000 from Reb Anderson Roshi and is Dharma Teacher at Ancient Dragon Zen Gate in Chicago. After residing for years at San Francisco Zen Center and Tassajara monastery, Taigen also practiced for two years in Kyoto, Japan. Taigen is author of Zen Questions: Zazen, Dogen, and the Spirit of Creative Inquiry, Faces of Compassion: Classic Bodhisattva Archetypes and Their Modern Expression, and Visions of Awakening Space and Time: Dogen and the Lotus Sutra. He has edited and co-translated several Zen texts including: Dogen's Extensive Record: A Translation of Eihei Koroku, Cultivating the Empty Field: The Silent Illumination of Zen Master Hongzhi, Dogen's Pure Standards for the Zen Community, and The Wholehearted Way, and has contributed to many other books and journals. Taigen teaches online at Berkeley Graduate Theological Union, from where he has a PhD. He has taught at other universities including Saint Mary's College, the California Institute of Integral Studies, and in Chicago at Meadville Lombard Theological Seminary and Loyola University Chicago. Taigen has long been active in social justice programs, including Peace and Environmental Activism. Shohaku Okumura is a Soto Zen priest and Dharma successor of Kosho Uchiyama Roshi. He is a graduate of Komazawa University and has practiced in Japan at Antaiji, Zuioji, and the Kyoto Soto Zen Center, and in Massachusetts at the Pioneer Valley Zendo. He is the former director of the Soto Zen Buddhism International Center in San Francisco. His previously published books of translation include Shobogenzo Zuimonki, Dogen Zen, Zen Teachings of Homeless Kodo, and Opening the Hand of Thought. Okumura is also editor of Dogen Zen and Its Relevance for Our Time and SotoZen. He is the founding teacher of the Sanshin Zen Community, based in Bloomington, Indiana, where he lives with his family. John Daido Loori was, until his death in 2009, the spiritual leader and abbot of Zen Mountain Monastery in Mt. Tremper, New York. Trained in koan Zen as well as in the subtle school of Master Dogen's Zen, he was the Dharma heir of Hakuyu Taizan Maezumi Roshi. Devoted to maintaining authentic Zen training, he developed a distinctive style, called the Eight Gates of Zen, based on the noble eightfold path. Drawing on his background as scientist, artist, naturalist, and Zen priest, Abbot Loori was an American master who spoke directly to students from the perspective of a common background. His books include Mountain Record of Zen Talks and The Heart of Being. Steven Heine is an authority on Japanese religion and society, especially the history of Zen Buddhism and the life and works of Dogen. He has published two dozen books, including Did Dogen Go to China? and Zen Skin, Zen Marrow. Reb Anderson Roshi moved to San Francisco in 1967 to study Zen Buddhism with Shunryu Suzuki Roshi, who ordained him as a priest in 1970. Since then, he has continued to practice at the San Francisco Zen Center, where he served as abbot from 1986 to 1995 and is now a senior dharma teacher. Anderson Roshi lectures and leads retreats around the world, and is the author of Warm Smiles from Cold Mountains and Being Upright. He lives with his family and friends at Green Dragon Temple, Green Gulch Farm, near Muir Beach, in Northern California.
click to open popover

Roy Kirby Chaudoir
5.0 out of 5 stars Perfect copy of the wonderful work.
Reviewed in the United States on 5 February 2013
Verified Purchase
There is nothing that could be left Iszard after receiving this translation of this important document. It is a star among my books on my bookshelf.
Read more
2 people found this helpful
Helpful
Sending feedback...
Thank you for your feedback.
Sorry, we failed to record your vote. Please try again
Report abuse
Load more international reviews

Benjamin Lopez
5.0 out of 5 stars Zen Practice
Reviewed in the United States on 9 May 2010
Verified Purchase
Dogen's Extensive Record: A Translation of the Eihei Koroku: This is an excellent Zen book or either a novice or serious Zen meditator.
Read more
4 people found this helpful
Helpful
Sending feedback...
Thank you for your feedback.
Sorry, we failed to record your vote. Please try again
Report abuse

Mike Scron-Lee
5.0 out of 5 stars Five Stars
Reviewed in the United States on 26 December 2014
Verified Purchase
Everything was great! Super service!
Read more
Helpful
Sending feedback...
Thank you for your feedback.
Sorry, we failed to record your vote. Please try again
Report abuse