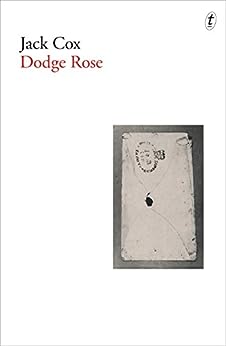 "Australian writer Jack Cox's frisky and disorienting debut Dodge Rose is part legal satire and part mash note to James Joyce. . . . Mr. Cox has a Joycean love of colloquialisms, puns and lists, and he modulates between drastically different registers of speech...[it's a] brilliant showoff of a book... for a reader open to linguistic spectacle, it's a memorable performance." -Wall Street Journal

"Cox has created in Max one of the most extraordinary narrative voices I've read this year." -The National

"Cox is a beautiful writer." - The Saturday Paper

"It is an original, at times brilliant work that in its avoidance of cliche, its restorative effect on language, actually does recall Beckett." -The Guardian

"There will be few novels released this year as original, daring and difficult as Dodge Rose." -Sydney Morning Herald --This text refers to the paperback edition.

Jack Cox was born in Sydney, Australia, and holds a Master's degree from the University of Sydney. In 2012, he studied in Paris as the recipient of a Marten Bequest scholarship. Dodge Rose is his first novel. --This text refers to the paperback edition.

Amazon Customer
3.0 out of 5 stars This is a first for me, not finishing a ...
Reviewed in Australia on 10 February 2017
Verified Purchase
This is a first for me,not finishing a book.usally Even if Iam unimpressed or unengaged I finish reading the book.This time I couldn't.Too much historical facts recorded,lots of quoted reports,which would be interesting to some.Will try to return to this book when in the right mind frame.
Read more
Helpful
Report abuse

Cloggie Downunder
TOP 500 REVIEWER
2.0 out of 5 stars An unconventional debut
Reviewed in Australia on 27 June 2016
“She stretched the red elastic between her fingers… Her voice faltered. Something obvious appeared to be beginning to dawn on her and she frowned until the elastic had slowed to a stop and her thought come home”

Dodge Rose is the first novel by Australian author, Jack Cox. Maxine tells of the arrival from Yass of twenty-one-year-old Eliza, come to Sydney by train to deal with the estate of her late Aunt Dodge Rose. Maxine is fairly certain she is not Dodge’s daughter, but has been living with her in the King’s Cross flat since she can remember. Matters don’t turn out quite as expected and legal complications see them trying to make money from the contents of the flat. About half-way through the book, the narrative suddenly switches to the nineteen-twenties, with the story being told by a young girl (probably Dodge Rose).

The initial narrative is fairly straight-forward, as the quoted passage above, and “Dodge had spoken about them but always in the past tense and her sister had seemed to flicker so dimly through the rooms of her memory …” show. Cox gives the reader some excellent descriptive prose like “…the train wound up the rusted arteries to Central Station”.

But soon, the text becomes less clear: “Her words came and went as a revelation, everything in the wake of that great property expanding into so many impalpable and inadequate dividers, being at first just a vague tergiversation and then as if the same abstract shades that had clabbered every particle in the flat turned for a moment as full as fleeting as a rush as a rush of oxygen into a spumous surplus, leaving me floating in their airy mould, surprised. I have never made plans, being by nurture far from pleonectic. I made some”

Much conventional punctuation is abandoned: without quote marks for speech and question marks, and often commas, the reader has to work hard to make sense of the text. By the time the pages (and pages and pages) of the silk, Smith’s legal ramblings are reached, even the most diligent reader will be tempted to skip this (no doubt intentionally) impenetrable, irrelevant and pointless material. Ditto the pages of inventory of the flat’s contents, and the pages of colonial banking history.

While it is apparent that Cox has done extensive research, it is a pity the information is so inaccessible: as well as the creative spelling (phonetic? typos?) and incomplete sentences of the first half, in the second half, capitals and apostrophes are also absent (who could ever envisage longing for apostrophes!). Perhaps this is meant to represent an inner monologue or stream of consciousness, but some will see this as laziness or arrogance on the part of the author, and lack of respect for the reader.

What redeems this work from a lower rating is the historic content (where it can be interpreted) and the descriptive prose. The typographical representation of the piano being smashed to pieces looks like a toddler tantrum on a keyboard. This is a novel that may appeal to readers looking for something different, something outside the square. It had been described as original and brilliant: the average reader will certainly agree with the former. An unconventional debut.
Read more
One person found this helpful
Helpful
Report abuse
See all reviews

Sewlady
5.0 out of 5 stars Five Stars
Reviewed in the United States on 30 July 2017
Verified Purchase
Young author making his debut in the literary world!
Read more
Report abuse
See all reviews
Back to top
Get to Know Us
Make Money with Us
Let Us Help You
And don't forget:
© 1996-2021, Amazon.com, Inc. or its affiliates