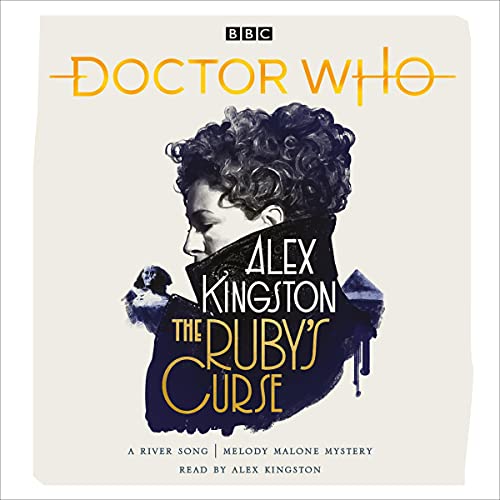 4.7 out of 5 stars
4.7 out of 5
137 global ratings
How are ratings calculated?
To calculate the overall star rating and percentage breakdown by star, we don’t use a simple average. Instead, our system considers things like how recent a review is and if the reviewer bought the item on Amazon. It also analyses reviews to verify trustworthiness.

Adam C.
5.0 out of 5 stars An enjoyable romp
Reviewed in Australia on 18 June 2021
Verified Purchase
If you like River Song, this book is the thing
Read more
Helpful
Report abuse
See all reviews

Alaran
5.0 out of 5 stars Enjoyable and imaginative idea
Reviewed in the United Kingdom on 19 June 2021
Verified Purchase
The last couple of years have seen Doctor Who books penned by the Doctor himself (Tom Baker) as well as one of his/her companions (Sophie Aldred). Now it is the turn of the Doctor’s wife.

However, unlike the aforementioned, this isn’t a Doctor Who novel as such. Instead it is very much a River Song one. So much so, in fact, that the two leads are River Song herself and her alter ego Melody Malone, the gumshoe private eye role adopted by her in ‘The Angels Take Manhattan’. Melody is portrayed as her own individual character, seemingly unaware that she is/was a role taken on by River, and the story is told from the perspectives of them both.

Initially the book is structured to reflect this with chapters alternating between Melody pursuing an investigation in 1939 and River in languishing in her cell at the Stormcage facility in the sixth millennium. The idea is that River is killing time and helping to provide some additional income for her parents stranded in time by writing pulp fiction detective novels featuring her old alter ego.

However, things don’t stay this way for long once River starts to communicate with fellow prisoner, Ventrian, and becomes embroiled in a quest to find a deadly and powerful artefact known as the Eye of Horus. The alternating chapter structure is then dropped after the first third of the book as River and Melody’s stories begin to coalesce and it becomes apparent that River’s quest for the Eye and Melody’s investigation into a ruby that is supposed to belong to Cleopatra are one and the same thing. The line between fiction and reality then begins to blur leaving River uncertain as to what is her creation and whether the characters of her unfinished detective novel are now functioning independent of her. It’s a clever concept and thoroughly entertaining.

With characters gathered together with a murderer to be revealed, searches for lost tombs full of traps, trips through time to ancient Rome and Egypt and a little bit of ‘timey-wimeyness’ thrown in, it all results in a rip roaring adventure which delightfully plays into the skillsets of both River Song and Melody Malone.
Read more
One person found this helpful
Report abuse

MrHungry
3.0 out of 5 stars Starts well and then loses its way.
Reviewed in the United Kingdom on 13 June 2021
Verified Purchase
I will admit to being slightly disappointed but I would be hard pressed to articulate why as I was hooked for the first 100 pages or so. I think that the problem was that River Song’s alter-ego Melody Malone started to take too much prominence and pushed River into the background (and she is one of my favourite characters from new Doctor Who).

On the positive side the dialogue that River has in the novel is near perfect and there was enough in the story to make me think that I should give it another read in the near future.

On the negative side where would a BBC Doctor Who book be without its editing errors and typos? In fairness they are not as bad as some recent offerings but enough to be distracting. And where did River get the Complete Works of Edgar Allan Poe that she mentions on page 196? (Though I may have missed something.) There is also the obligatory gratuitous reference to the 13th Doctor that adds nothing to the story. It’s not as egregious as the cameos in Tom Baker’s Scratchman coming as it does almost at the end of the story but really could have been excised.
Read more
One person found this helpful
Report abuse

NK
5.0 out of 5 stars Beautiful book, Great read! Props to Alex Kingston for some really great writing
Reviewed in the United Kingdom on 25 May 2021
Verified Purchase
I'm loving this book! It's a great addition to the vast array of Doctor Who Media out there. More River Song is exactly what we needed. Aesthetically, the cover is gorgeously designed. It feels practically luxurious to the touch.
Read more
3 people found this helpful
Report abuse

ClanBailey59
5.0 out of 5 stars Cracking read
Reviewed in the United Kingdom on 9 June 2021
Verified Purchase
It is written with style and intrigue that would rival a good Steven Moffat episode of Dr Who! A few twists and turns in the plot line, but if you are an avid River Song admirer this is to be expected. When you read this do it with River Song / Alex Kingston's Voice and let your imagination run free!!
Read more
2 people found this helpful
Report abuse

Kindle Customer
5.0 out of 5 stars Brilliant
Reviewed in the United Kingdom on 25 May 2021
Verified Purchase
It was a brilliant read and also felt like it was written by river song: Alex really understands her character. It was very clever how it is split between melody Malones world and river songs. I would love more books like this!!
Read more
2 people found this helpful
Report abuse
See all reviews
Back to top
Get to Know Us
Make Money with Us
Let Us Help You
And don't forget:
© 1996-2021, Amazon.com, Inc. or its affiliates