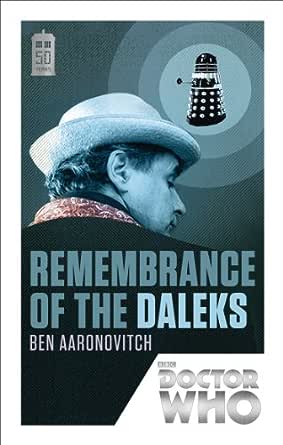 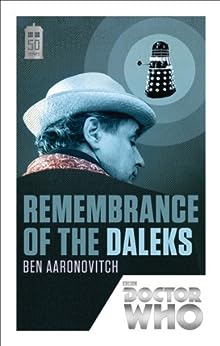 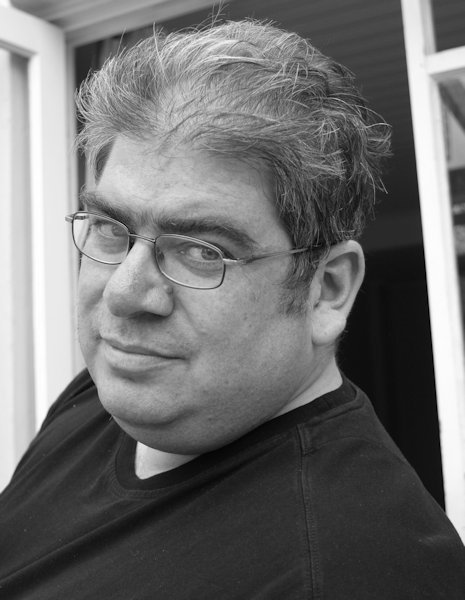 Ben Aaronovitch writes tie-in novels and TV scripts, and wrote the screenplays for the Seventh Doctor episodes Battlefield and Remembrance of the Daleks. He is the author of a series of audio dramas based on TV's Blake's 7, as well as the acclaimed Rivers of London series. He also works as a bookseller. --This text refers to the paperback edition.
click to open popover

R. Le Quin
5.0 out of 5 stars Remembrance of the Daleks expanded.
Reviewed in the United Kingdom on 1 March 2015
Verified Purchase
A worthy addition to the range, in many ways, even down to the enhanced cover with 2 additional daleks.

At times you have to forget the tv version and just allow what is happening to happen. Sometimes the tv version is better, and sometimes this audio is better. A lot of the additional bits give good back story and are well worth it. One scene involving a dalek doing 30 mph I did not like for some reason, despite 2005 Doctor Who doing it all the time; it probably tied in with a 2-3 day listening break from the story as clearly listening to 5 discs in one day is not going to happen for most people, whereas 90 minutes story (equivalent to 1.5 audio discs in length) is perfectly feasible.

I really warmed to Molloy's narration, trying hard to distinguish the Doctor from other characters and doing a great job of a difficult performance. We think of Molloy as "Davros" too much sometimes and hearing him do McCoy undoes some of that typecasting.

The Dalek speak through out is sudden and chilling. Perhaps ironic having Briggs do Daleks when we have Davros himself but I like the fact that recent audios often have a second actor for cameos.

Overall this is a great companion product to the DVD/book as it got me thinking about things I just took for granted. I never really thought about whose funeral it was at the end of the tv version. It might be obvious to some, but in most Doctor Who stories some or even all the cast die, and getting a funeral for one of them is rare.

The Keen Reader
4.0 out of 5 stars The Daleks back at Totters Lane
Reviewed in the United Kingdom on 13 July 2013
Verified Purchase
This is the story chosen to represent the Seventh Doctor in the novelisations to celebrate the 50th anniversary of Doctor Who in 2013. Unusually for this series of novels, this story was actually a televised serial from the original series, played initially in 1988 as part of the 25th Season, and featuring Sylvester McCoy as the Doctor and Sophie Aldred as Ace, his feisty companion. This was only the second story to feature Ace, her character having been introduced in the last story to feature Mel Bush, Dragonfire.

In this story, the action takes place over just a few days, but the pace is rapid. The Doctor has returned to Totters Lane in November 1963, to resolve some unfinished business from when he left with Susan, Ian and Barbara. Unfortunately, he seems to have miscalculated somewhat and gets more than he bargained for when two groups of Daleks join in the action.

The story as it appeared on tv always seemed a bit confusing to me, with the scenes cutting ina and out so fast that it all became a bit of a blur. The book tidies that up quite a lot, with some background that helps build the characters better, and continuity that helps tie the storyline together into a coherent narrative. It is still a fast-paced story, and there are lots of action scenes, with Ace and her baseball bat getting involved early on. I really liked the character of Ace; she made a change from `girly' or `helpless' companions, and her rapport with the Doctor meant good exposition of the storylines they were in together. The Doctor is his usual seventh Doctor mysterious self, and the characters from the 1960s time period are well written and portrayed.

The only thing I felt jarred somewhat was the `emotions' given to the Daleks; I've always thought that Daleks would not have anything like emotions, but were rather process and order driven; emotion would not have entered into their actions or motivations at all, I wouldn't have thought. But that's just my thought on the matter. Overall, a good story, made better by a good novelisation. Great stuff.
Read more
2 people found this helpful
Helpful
Sending feedback...
Thank you for your feedback.
Sorry, we failed to record your vote. Please try again
Report abuse

YeahYeahNoh
4.0 out of 5 stars A classic Doctor Who deception with a classic enemy too
Reviewed in the United Kingdom on 17 March 2013
Verified Purchase
Hard to believe this is almost a quarter of a century old.
I picked this one up partly because it was one of my favourite Doctor Who periods and partly because of the books this author has gone onto write, specifically the Rivers series, beginning with: Rivers of London (PC Peter Grant).
The foreword was well worth reading, and pretty much gives the books strengths and weaknesses in a nutshell.
If I was reading it without the nostalgia and history of Doctor Who I might have rated it slightly lower, but I enjoyed it, and it was a good entertaining read. Thanks for the memories and a couple of hours of nostalgia fuelled fun.
If you like this Doctor and Ace then definitely recommended.
Read more
5 people found this helpful
Helpful
Sending feedback...
Thank you for your feedback.
Sorry, we failed to record your vote. Please try again
Report abuse

John Hopper
5.0 out of 5 stars Good novelisation that adds some depth to the TV version
Reviewed in the United Kingdom on 26 November 2013
Verified Purchase
In many ways, this is a perfect novelisation of a classic Doctor Who story to read at the 50th anniversary. It was the first story of the 25th anniversary season in 1988, and is better regarded than the actual 25th anniversary story, Silver Nemesis. It is also set in and around Coal Hill School in late November 1963 (thus giving rise to a self-referential in-joke in the TV broadcast that isn't depicted in this novelisation!). It is a very good Dalek story, with two factions battling over the ancient super-device, the Hand of Omega. This novelisation expands somewhat the TV version, with characters given additional backstory and motivation. It is the only novelisation to really try to get into Dalek thinking as well, exploring their half-organic, half-robotic essence in rather a disturbing way. The actual narrative isn't different from the TV version, with the same events taking place in the same order and the dialogue near identical - it is mostly very good and memorable dialogue, so that is fine. Good stuff.
Read more
Helpful
Sending feedback...
Thank you for your feedback.
Sorry, we failed to record your vote. Please try again
Report abuse

Scaroth, Last of the Jagaroth
5.0 out of 5 stars Remember, remember, November 1963
Reviewed in the United Kingdom on 27 January 2016
Verified Purchase
A 25th anniversary season story from 1988, this sees Sylvester McCoy’s Seventh Doctor return to his ‘roots’ at Coal Hall School, and face his oldest enemy once more. This was the TV serial that established the moody, dark incarnation that McCoy sadly never had the chance to properly develop; his Doctor is sublime here – manipulating, encouraging, plotting, and scheming; his sidekick Ace hot on his heels. Terry Molloy (Eighties Davros) makes a superb reader – crisp and perfectly nuanced, whilst the range’s increasing gamut of audio effects complement the story nicely.
Read more
Helpful
Sending feedback...
Thank you for your feedback.
Sorry, we failed to record your vote. Please try again
Report abuse
Load more international reviews

Leigh Wood
5.0 out of 5 stars On Target
Reviewed in the United Kingdom on 2 December 2014
Verified Purchase
The episodes this is based on are some of the best from the first 51 years of Doctor Who, and this novelisation is a perfect companion piece.

It retains the brilliant set-pieces and sparkling dialogue, but weaves extra layers into Rachel and Mike particularly.

I really enjoyed the Dalek mythology that is peppered throughout. I'm not sure how Mr. Aaronovitch managed to inject more character to Daleks, but he did so deftly. The bits about Daleks feeling cold, ostensibly as an emotional reaction, for it to be remedied by mechanical means is great. Loved all that stuff.

glynis gillespie
3.0 out of 5 stars It should be visual
Reviewed in the United Kingdom on 6 March 2020
Verified Purchase
Good story but Dr who should be watched not read. The visual effects are essential in my opinion otherwise good.
Read more
Helpful
Sending feedback...
Thank you for your feedback.
Sorry, we failed to record your vote. Please try again
Report abuse

P.A.G
5.0 out of 5 stars Excellent
Reviewed in the United Kingdom on 26 July 2018
Verified Purchase
I love this era of doctor who... Still relevant today and written so well I would highly recommend it. Tackles racism in many forms as well as a good doctor who story.
Read more
Helpful
Sending feedback...
Thank you for your feedback.
Sorry, we failed to record your vote. Please try again
Report abuse

Lady H
3.0 out of 5 stars Follows the episodes faithfully
Reviewed in the United Kingdom on 6 October 2018
Verified Purchase
After reading other tv tie-ins i expected more. It really needed to be fleshed out more.
Read more
Helpful
Sending feedback...
Thank you for your feedback.
Sorry, we failed to record your vote. Please try again
Report abuse
Load more international reviews

fenric71
5.0 out of 5 stars Enjoyable book!
Reviewed in the United Kingdom on 10 February 2019
Verified Purchase
Brilliant book of a great story!
Read more
Helpful
Sending feedback...
Thank you for your feedback.
Sorry, we failed to record your vote. Please try again
Report abuse

Alan Johnstone
4.0 out of 5 stars Good read
Reviewed in the United Kingdom on 5 September 2018
Verified Purchase
This book stayed loyal to the tv episodes. It does jump about from time to time, and got just a little confusing. But still enjoyed reading it.
Read more
Helpful
Sending feedback...
Thank you for your feedback.
Sorry, we failed to record your vote. Please try again
Report abuse

Eddie Lajoie
5.0 out of 5 stars Any fan needs to read this
Reviewed in the United Kingdom on 21 July 2014
Verified Purchase
This book expands upon an episode where a lot was going on, making it clearer and scaling up the consequences. Not to give anything away but it also hints at things that were planned before the series was stopped in the 80s. If that wasn't enough, it has one of the most famous and loved Daleks of all time (as much as a Dalek can be loved).
Read more
Helpful
Sending feedback...
Thank you for your feedback.
Sorry, we failed to record your vote. Please try again
Report abuse