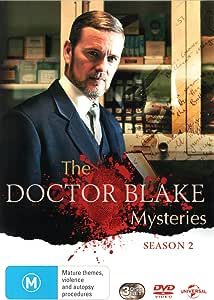 Share
Only 1 left in stock.
Add to Cart
Buy Now

Secure transaction
Your transaction is secure
We work hard to protect your security and privacy. Our payment security system encrypts your information during transmission. We don’t share your credit card details with third-party sellers, and we don’t sell your information to others. Learn more
Details
Ships from
Amazon AU
Sold by
Amazon AU
New (4) from
$17.00 FREE Delivery on first order.

All ten episodes from the second series of the Australian drama about a doctor returning home to take over his late father's medical practice. Doctor Lucien Blake (Craig McLachlan) fled his hometown of Ballarat in his 20s to travel and study medicine in Scotland but after receiving news of his father's death he returned following a 33-year absence. Back in Ballarat, he finds himself not just taking on his father's medical practice but also a new role as the town's police surgeon. In this series Doctor Blake returns from China and is quickly involved in another murder mystery, this time involving the local council. Later, he must solve a murder in the nearby cinema and the death of a priest in his church's confessional. The episodes are: 'The Heart of the Matter', 'The Food of Love', 'A Foreign Field', 'Smoke and Mirrors', 'Crossing the Line', 'Mortal Coil', 'The Silence', 'The Ties of the Past', 'The Sky is Empty' and 'An Invincible Summer'.

4.8 out of 5 stars
4.8 out of 5
424 global ratings
How are ratings calculated?
To calculate the overall star rating and percentage breakdown by star, we don’t use a simple average. Instead, our system considers things like how recent a review is and if the reviewer bought the item on Amazon. It also analyses reviews to verify trustworthiness.

Aremess
5.0 out of 5 stars Top quality
Reviewed in the United Kingdom on 9 June 2015
Verified Purchase
Terrific series. I liked series one and, having bought series 2, I feel that they've excelled themselves. I find the storylines very well put together and, more importantly, well acted.
Each of the stories are logically put together with no 'hidden' suddenly uncovered 'clues' that the viewer (or the players) could never have foreseen. Craig McLachlan has done even better with the character this series and, with the new police officer, there's been a slight change in relationships but always to the show's advantage. If I were to make a critisism, it would be one that's common among all series of this type and that is that the main character, who is nothing to do with the police other than as their doctor of choice, gets involved in all aspects of police
business from detecting to questioning, which makes me wonder, does he have no patients in Balerat?

**** WARNING : SPOILER ******
I thought the final scenes of the final episode, with a possible love interest between the Doc and Nadine Garner as Jean Beazley, the housekeeper, was well done and a real cliff-hanger for the future - will they, won't they???

Ignoring critisisms, I love the series and look forward to series 3

Jonathan S.
5.0 out of 5 stars Australia's Sherlock Holmes
Reviewed in the United Kingdom on 17 August 2015
Verified Purchase
This series has been brilliant! Dr Lucien Blake is a police pathologist, who investigates the cause of deaths. The setting is Ballarat, a small town in Australia in the 1950s. On his investigations, he is accompanied by Inspector Lawson, an abrasive but cautious policeman and also by his junior. All stories start with a death, for which the cause often turns out to be different from what was first apparent. Then the tension builds up in the efforts to determine who the suspect is.
I have also enjoyed the Australian accents, the attention to historical detail and the excellent dialogue.
May there be more of these series. I hope to aquire all of them
Read more
Report abuse

Truman
5.0 out of 5 stars An intriguing Australian series and excellent DVD quality
Reviewed in the United Kingdom on 1 November 2016
Verified Purchase
This series shows what life was like in Australia after WWII, taking place in the mid to late fifties. The medical history is fascinating; it is especially interesting to watch as Dr. Blake performs forensic tests using glass tubes and various chemical substances that today are conducted on modern laboratory equipment, yet he obtains the same results. His obsessive desire to get to the truth of the real cause of a death drives the plot of each episode. His personal interactions with those living with him in his home (and private medical practice) are often painful for me to watch, because although he sees everything involving a suspicious death, he often misses what is going on right in front him with the people who care about him.

The DVD's are subtitled for each episode and the quality is very good. I will continue to purchase them from Amazon.co.uk as they are released. The Doctor Blake series is shown in my area on PBS, but they are always one series behind. I simply can't wait a year to see what happens next
Read more
Report abuse

Rose Tyler
5.0 out of 5 stars I love Doctor Blake Mysteries
Reviewed in the United Kingdom on 3 May 2015
Verified Purchase
I love Doctor Blake Mysteries. I was really looked forward to seeing Series 2 so I wasn't disappointed when I watch the new DVD
Brilliant acting from all the cast and Craig McLachlan is on top form as ever. I thought some of the storylines were better than others but in all a very entertaining drama to watch. Definitely worth buying the DVD. Can't wait for series 3
Read more
Report abuse
See all reviews
Back to top
Get to Know Us
Make Money with Us
Let Us Help You
And don't forget:
© 1996-2021, Amazon.com, Inc. or its affiliates