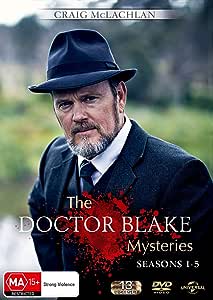 Share
Only 1 left in stock (more on the way).
Quantity:1
Add to Cart
Buy Now

Secure transaction
Your transaction is secure
We work hard to protect your security and privacy. Our payment security system encrypts your information during transmission. We don’t share your credit card details with third-party sellers, and we don’t sell your information to others. Learn more
Details
Ships from
Amazon AU
Sold by
Amazon AU
The Doctor Blake Mysterie... has been added to your Cart
New (3) from
$90.61 + FREE Delivery

Every episode from the first five seasons of the Australian series about a doctor returning home to take over his late father's medical practice. Doctor Lucien Blake (Craig McLachlan) fled his hometown of Ballarat in his 20s to travel and study medicine in Scotland but after receiving news of his father's death he returned following a 33-year absence. Back in Ballarat, he finds himself not just taking on his father's medical practice but also a new role as the town's police surgeon.

4.5 out of 5 stars
4.5 out of 5
155 global ratings
How are ratings calculated?
To calculate the overall star rating and percentage breakdown by star, we don’t use a simple average. Instead, our system considers things like how recent a review is and if the reviewer bought the item on Amazon. It also analyses reviews to verify trustworthiness.

Jacquelene Murphy
5.0 out of 5 stars Doctor Blake Mysteries
Reviewed in Australia on 8 March 2019
Verified Purchase
I know there is a great deal of controversy going on at present about Craig MacLachlan, but I like the series and chose to buy it.
Read more
Helpful
Report abuse
See all reviews

NBR99
4.0 out of 5 stars Great Series with a Very Good Transfer (for DVD) - Surround Sound varies
Reviewed in the United Kingdom on 9 May 2019
Verified Purchase
Really great to have all episodes of this wonderful Australian Mystery Drama in one place.

I am not the best at reviewing the plots & characters so I would just refer you to the many reviews available for the individual series which give you the good reasons for getting this.

This complete set also includes the Ghost Stories episodes that, at the time of writing, I don't think have been aired in the UK. These 2 episodes contain some of the core characters - led by Jean but not Doctor Blake himself - you may need to look on the net for further details.

Like many TV series, although broadcast in HD, does not seem to be released on Blu-Ray - which I would prefer - but I can report the image quality on the transfer is very good. (possibly as good as we can get for DVD)

Sound wise Series 1, 2 & 4 only have a Stereo sound track but I am pleased to say that from Series 3, 5 & Ghost stories also get a 5.1 Surround Sound track (which is the default) as well as the ordinary Stereo track. Only Stereo is mentioned on the packaging. It is a shame & a disappointment that S1,2 & 4 did not also have the 5.1 surround track - I certainly don't understand why S4 does not when S3 does! (hence 4 rather than 5 stars)
For those that need it they all come with subtitles for the HOH.

One minor comment to end with - due to the number of DVDs in the set most dvds are doubled up on the internal holders which can make it slightly awkward but is probably the only way to get so many dvds into limited space.
Read more
18 people found this helpful
Report abuse

A. Watson
4.0 out of 5 stars Great period mystery series.
Reviewed in the United Kingdom on 12 April 2020
Verified Purchase
No spoilers.

I saw a couple of these on TV years ago and quickly got into it when I finally opened the box set.

Dr Blake gained a lot of experience in his travels before settling at his home town. He is the local Dr and Police surgeon, and is not bothered about ruffling feathers to make things right.

The series shows his exploits as he settles into life in his home town, making friends and enemies on the way.

The majority are single episodes, lasting less than an hour. The last 2 discs however are for 2, 2 part specials.

If you like mysteries, this is definitely something to try.
Read more
Report abuse

c kember
5.0 out of 5 stars Am loving it !
Reviewed in the United Kingdom on 9 April 2019
Verified Purchase
Watch last couple of episodes, enjoyed , am now a fan. Good to watch in my own home when I want
Read more
3 people found this helpful
Report abuse

Mr. David R. Scott
5.0 out of 5 stars Perfect present
Reviewed in the United Kingdom on 21 November 2019
Verified Purchase
Excellent price, brought as a gift, I think they will love it. Best price by a long shot, great box set
Read more
One person found this helpful
Report abuse

pianojan
5.0 out of 5 stars Great TV
Reviewed in the United Kingdom on 3 May 2019
Verified Purchase
Brilliant series for acting, direction and plots. Warmly recommended family viewing.
Read more
2 people found this helpful
Report abuse
See all reviews
Back to top
Get to Know Us
Make Money with Us
Let Us Help You
And don't forget:
© 1996-2021, Amazon.com, Inc. or its affiliates