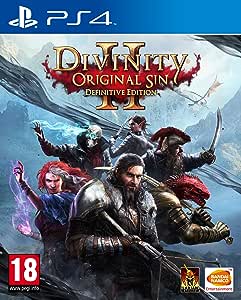 The Divine is dead. The Void approaches. And the powers lying dormant within you are soon to awaken. The battle for Divinity has begun. Choose wisely and trust sparingly; darkness lurks within every heart in cooperative sandbox RPG Divinity: Original Sin 2 - Definitive Edition.

4.5 out of 5 stars
4.5 out of 5
888 global ratings
How are ratings calculated?
To calculate the overall star rating and percentage breakdown by star, we don’t use a simple average. Instead, our system considers things like how recent a review is and if the reviewer bought the item on Amazon. It also analyses reviews to verify trustworthiness.

Neil Lennon
3.0 out of 5 stars Divinity 2 First Impressions
Reviewed in the United Kingdom on 3 September 2018
Platform: PlayStation 4Verified Purchase
Divinity 2 is a massive RPG with hours and hours of game play, so rather than wait until I have completed it I thought it might be useful to give some first impressions after a few days of playing it.
Divinity 2 looks and plays very much like Divinity 1 on the PS4. The graphics and controls are very similar and this is both a good thing and a bad thing.
Your standard game play is a top down view, reminiscent of classic RPG's like Baldurs Gate, and you can pan in and out very easily. Close up the graphics look great, really detailed textures and every area is filled with things to do and interact with. However zoomed out there is often so much on the screen it is very difficult to see what is going on, especially in areas of dark lighting. Unfortunately even zoomed fully out it is still hard to see what is ahead of you, in many cases you will be spotted and attacked by enemies before they have even appeared on the screen. This can be frustrating, especially when you consider how unforgiving this game can be in combat.
As with the first game you control a party of up to four characters, however Divinity 2 gives you the option of playing one of the pre-generated characters or making up your own. If you play a pre-generated character you get extra dialogue options as they have been written into the story, so really it makes sense to do this. The remaining pregens can be recruited as NPC's to control and equip as usual, although they do have their own stories and motivations.
The main story is a strange mix as it continues to include Divinity's quirky humour, with many jokes about roleplaying tropes breaking the fourth wall and reminding the player that it does not take itself too seriously. However Divinity 2's story seems darker than the first game, with a strange emphasis on blood and gore which makes an odd contrast. Without giving away too much I was also surprised how similar the story was to Dragon Age's plot about tranquil mages, but I guess that's up to the game designers to fight over.
Combat in Divinity 2 plays much like before, it is turn based, with a lot of tactical special moves and spells which can be combined or countered to make it all seem like a weird version of chess. Mastering these combinations is key to winning combat, for example using a rain spell to make your enemies wet, then using a lightning spell to electrocute them. It's all a bit cartoon like, reminiscent of Wile E Coyote, and those hoping for more visceral realistic combat will be disappointed. It's also quite slow as you have to wait for various NPC's to perform various special moves with their own graphics to show off. Very rarely do combatants simply hit each other.
Overall then fans of Divinity 1 will love this sequel as in most ways it is more of the same. However those new to the game may find it an acquired taste. Much of the progression relies on interacting with everything and everyone, something that requires an attention to detail that will aggravate the casual gamer. The amount of fiddling around with inventories and abilities also requires a lot of thought, and if you get it wrong you will find your characters dying a lot. If you have not played Divinity 1 I would highly recommend playing this game on an Easy difficulty setting. There is not a lot of randomisation so if you do have to restart you will end up having to play the whole thing through again.
That said there is a lot of fun to be had with Divinity 2. The fact that it does not take itself too seriously means there are a few genuinely funny moments to be had. The high level of detail while fiddly does mean there are lots and lots of secrets to uncover and many surprises to be found. Using a "narrator" as the voice of the GM means it does feel a lot like an old school RPG and the game offers lots of options for playing with others online or over a network. It's not perfect but Divinity 2 for all its flaws is still an impressive RPG with a lot to offer fans of the genre.
Read more
28 people found this helpful
Report abuse

Vicky
2.0 out of 5 stars A bit pants really!!!
Reviewed in the United Kingdom on 18 December 2018
Platform: PlayStation 4Verified Purchase
Spent about 30mins setting up my character and thought wow there are so many customisation options this is going to be great and it looks great but the fun ended there! Once o started playing I realised all those visual character options were a waste of time as your figure is so small you can hardly see any detail without seriously straining your eyes (I have 20/20 vision). I continued playing for a few hours but found the battle scenario to be lame and overly complicated - by this time I had double visipnfrom straining to see the tiny figures and graphics on the screen.

Sold it the next day :(
Read more
14 people found this helpful
Report abuse

driver
5.0 out of 5 stars Brilliant
Reviewed in the United Kingdom on 25 September 2018
Platform: PlayStation 4Verified Purchase
Having played the first and loved it I couldn't wait for this and it doesn't disappoint hours and hours of gameplay .A few tips for the newcomers when you first start on the beach take the shovel and sleeping bag which restores all your party's health when not in combat this will save you a load of time / nails combine with your boots so you can't fall on the ice during combat another combat tip flood the battle area with water before combat starts then contaminate the water then when you start combat make the enemies come to you and set fire to the contaminated water basically there loads to do and combine hours of gameplay brilliant game and if you're stuck there's always tips on YouTube.
Read more
12 people found this helpful
Report abuse

SplitMind
3.0 out of 5 stars Carries Most of the Same Problems From the First Game!
Reviewed in the United Kingdom on 21 July 2019
Platform: PlayStation 4Verified Purchase
This game is particularly frustrating because like its predecessor it is very close to being a great game, yet the mechanics that irritate me seem to the mechanics revered by much of the community.

The camera - how can anyone revere this? Even when zoomed out you don't have a great view of what's ahead, undermining sneaking attempts and making traversal more difficult than necessary.

Solving missions - I find myself using the internet to find solutions to quests and often doing so just to find out where to go next. This is another revered game mechanic but really it's just a waste of time, padding out the game with mundane exploration. We're led to believe that this game is 'open', however it's very easy to get the worst ending to a mission and the worst reward, often without prior warning unless you use a guide. This is particularly frustrating as this is identical to the first game. This game does seem to be more forgiving with its use of quest markers to guide you, but far too often there is little-to-no indication of how to progress a mission.

Gameplay - this is where it becomes a very mixed bag. Unless you're well-versed with this game, starting the game in any mode other than explorer is going to be a hellacious and punishing experience. On that note, I am also irritated that I had to look online to find explanations for what the names of each mode actually mean! The learning curve is extreme in this game. There is a slight tutorial at the start but it is vey brief and shallow. You are then constantly inundated with information and mechanics. On one hand the diversity is great, but on the other it's extreme. You can only have four characters, yet there are many more different types, making it difficult to choose and experiment, creating a risk of a very unbalanced party.

Overall I am saddened and disappointed at what could have been two amazing games but they have clung onto some sort of elitist approach, taking pride in not 'hand-holding', with the end result being looking online for guides (whether people like to admit it or not). The fighting mechanics can be bizarre, especially the armour system. If you have 100s of hours to invest in this, you may find it pleasurable. I found it cumbersome and a chore.
Read more
7 people found this helpful
Report abuse

Atlas Jon
5.0 out of 5 stars A rarely brilliant game. Especially good as a coop experience.
Reviewed in the United Kingdom on 24 July 2019
Platform: PlayStation 4Verified Purchase
I very rarely give 5 star product reviews, this one definitely deserves it.

Like:
- Interesting story.
- Great for coop adventure (allows you to connect via multiple means).
- Characters are very customisable.
- Same great gameplay as the first game.
- Improvments on the first game such as more races, better armor appearance.

Dislike:
- If you are playing through the game with a friend then the game progress/characters are only saved on one profile.
Read more
8 people found this helpful
Report abuse
See all reviews
Back to top
Get to Know Us
Make Money with Us
Let Us Help You
And don't forget:
© 1996-2021, Amazon.com, Inc. or its affiliates