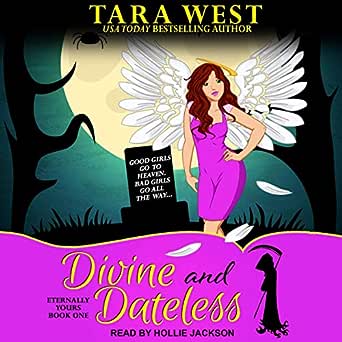 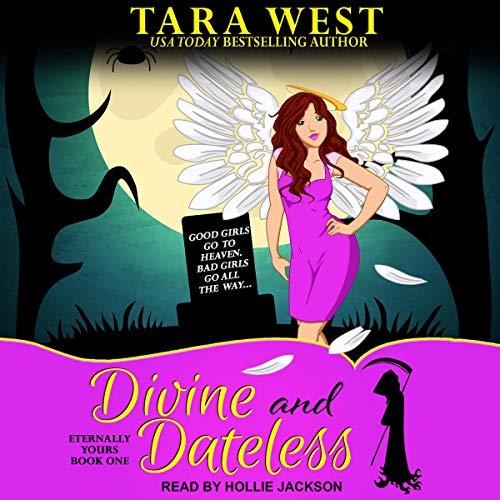 Divine and Dateless: Eternally Yours, Book 1

4.3 out of 5 stars
4.3 out of 5
403 global ratings
How are ratings calculated?
To calculate the overall star rating and percentage breakdown by star, we don’t use a simple average. Instead, our system considers things like how recent a review is and if the reviewer bought the item on Amazon. It also analyses reviews to verify trustworthiness.

Tracey Hogan
5.0 out of 5 stars I absolutely loved it! Great fun read
Reviewed in Australia on 23 August 2017
Verified Purchase
I absolutely loved it! Great fun read. Wonderfully written with great characters that are so well described you can visualise them! Loved the storyline and certainly can't wait for more,hopefully in the series. This was the first book that I've read by this author and it won't be the last! If you're wanting a story with a bit of everything, with characters you can relate to,as well as situations you can also relate to then do yourself a favour and get this book! I'm going to be buying a lot more books from this author as once I started this book I just had to finish it. My husband asked what was so funny as I was laughing so hard at some point and after I read the passage out to him he told me I had to pass the book along to him when I was finished. This is a man who doesn't read books unless they're educational or car manuals etc so to me that's the best review any author could possibly get. Keep up the good work please,as we all need a bit of sunshine in our lives!
Read more
2 people found this helpful
Helpful
Comment Report abuse

MrsSmuttyMcSmut
1.0 out of 5 stars Main Character ruins it...
Reviewed in Australia on 11 December 2015
Verified Purchase
The book has great bones, I'll give it that.
In fact the side characters were more interesting than the lead. Great all round fun :) Grandpa and his raging nympomania, Ires the hilarious drag queen and Hammerhead, who can't afford afterlife plastic surgery... very cool characters.
The main character , the heroine though.... *shivers*
She was the epitome of self-centered, egotistical and moronic. No wonder she couldn't get a date on earth or in the afterlife. 29 years old and behaving like a 14 year old whose just discovered men.
Apparently the afterlife has a ton of gluten free restaurants(my Hubby's a chef, his idea of Hell so makes sense...), hot men she can't stop creaming over and no vibrators.
Rather than try to change her ways to get to Heaven the Heroine spends her whole time stuffing her face with chocolate, arguing with people, thinking everyone is "too nice" and making sarcastic remarks about how people died, oh and worrying about your hair (because that's the most important thing when you're dead).
How on earth Grim fell for her, I have no idea. Maybe he likes airheads? Maybe he likes being tortured? Maybe he's desperate.
She doesn't deserve him.
I kept reading thinking she would see the error in her ways, the epiphany moment, but no, she's just as selfish as when she started.
AVOID. AVOID. AVOID. This book.

Lynall
TOP 500 REVIEWER
5.0 out of 5 stars Fabulous read
Reviewed in Australia on 27 October 2017
Verified Purchase
It seems ridiculous to start a romance with the death of the heroine but this story makes it work. It is funny and imaginative, and really enjoyable. I can’t wait to read more from this author
Read more
3 people found this helpful
Helpful
Comment Report abuse

Stellak
5.0 out of 5 stars Divine and Dateless... <3
Reviewed in Australia on 7 August 2014
Verified Purchase
To be honest, I nearly closed the front cover of my kindle after the first few pages and archived! But... I thought 'no I've started and now I must finish' as its only fair to the author. However, I was sadly wrong. I rose my brows, shook my head in bewilderment, laughed, cried and anything else you can think of as I finished reading this amazing book. I've read all of Tara' s books and Divine and Dateless is by far the best. Don't dilly dally, just download or buy the book.
Read more
3 people found this helpful
Helpful
Comment Report abuse

Maree
5.0 out of 5 stars Heehee I loved it
Reviewed in Australia on 31 May 2016
Verified Purchase
Not my usual type of read but I loved it. A sassy heroine, hunky Grimms and a whole lot of humour makes this quirky read very enjoyable. Highly recommended.
Read more
2 people found this helpful
Helpful
Comment Report abuse

May
4.0 out of 5 stars Life after death and the comedy show!
Reviewed in Australia on 1 August 2020
Verified Purchase
I love the comedy elements of this book, Ash's lack of how things work and the authors take on how things are after death!! Loved reading this book!!
Read more
Helpful
Comment Report abuse

Mike Powell
4.0 out of 5 stars Uh oh, she's in trouble
Reviewed in the United Kingdom on 18 October 2020
Verified Purchase
So when you've accidentally killed yourself by adding water to a hair drier that you've glued down the on switch, then the afterlife has to be an improvement, right ? A penthouse, a sexy valet to cater for all your whims - just what you need. And then you get told it's all been a.mistake....
Good fun, sexy, well paced and full of interesting characters, as vivid as Bridesmaids - l'll never get over Uncle Frank - and some unsuccessful dating encounters as well as the world's most faithful dog.
Just remember to be nice to everyone in the underworld and to hold your breath in the elevators and you'll be, well okay.
Recommended.
Read more
Report abuse

missd24
5.0 out of 5 stars A really funny book
Reviewed in the United Kingdom on 7 August 2015
Verified Purchase
When i first downloaded this book i must have been in a trance and not really paid attention to the description because i got quite a shock when i realised it was a book set in the afterlife, normally those type of books are not my cup of tea at all but i have to say i absolutely loved this book and im so pleased it was a free book and i downloaded it, otherwise i wouldn't have given it a chance. I really laughed out loud with this book, don't take it seriously and you'll love the book too, it really is the funniest, craziest book I've read in a while and i will defiantly be getting the rest of the series. I've already told my mother and friends to download it too, Love the cover as well.
Read more
6 people found this helpful
Report abuse

CntrlFreak
5.0 out of 5 stars Fun, flirty and so different
Reviewed in the United Kingdom on 17 May 2019
Verified Purchase
Although I wasn't sure what to expect, this book was completely different!! Girl dies and the grim reaper comes to collect....then the fun starts! From seeing multiple levels, getting rubbish jobs, making unexpected friends and getting it on with her grim....as well as meeting demons!! So much of this book I related to...had me LOL so many times and having those OMG moments. Now just need to find out what happens next!
Read more
Report abuse

lisa w
5.0 out of 5 stars Great read ! loved it
Reviewed in the United Kingdom on 21 August 2015
Verified Purchase
Best book I've read in ages had me totally hooked. I read mostly fantasy fiction Terry Pratchett, Janet Evanovich, Stephanie Meyer, James Herbert, Toby Frost and this author is right up there. Fantastic writing. Its a humorous and sexy (maybe a bit too graphic which it really doesn't need) look into what happens when we die and ascend or decend.....by elevator of course ! Imagine a modern day Bridget Jones electrocuting herself and being escorted to heaven by a 100 year old chippendale with old fashioned morals only to find out that what you did on earth really does matter in heaven. Really enjoyed it and bought the sequel which I must say was just as good I cant wait for the next and the next etc ...
Read more
2 people found this helpful
Report abuse

MsMerylB
5.0 out of 5 stars Paranormal Comedy.
Reviewed in the United Kingdom on 16 June 2019
Verified Purchase
Life in the after life? With a sexy Grim, new friends and old best friends making an appearance, I found this story irreverent and delightful! Ms West had me in stitches from the first page to the last with her wit and creative license.
Well written story with really wonderful characters.
Read more
Report abuse
See all reviews
Get FREE delivery with Amazon Prime
Prime members enjoy FREE Delivery and exclusive access to movies, TV shows, music, Kindle e-books, Twitch Prime, and more.
> Get Started
Back to top
Get to Know Us
Make Money with Us
Let Us Help You
And don't forget:
© 1996-2020, Amazon.com, Inc. or its affiliates