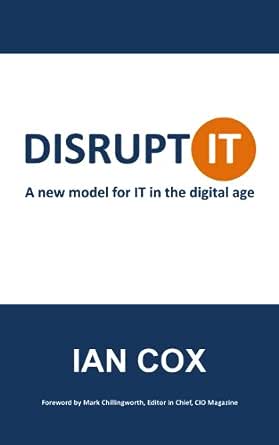 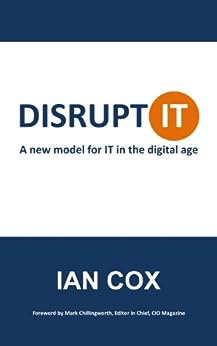 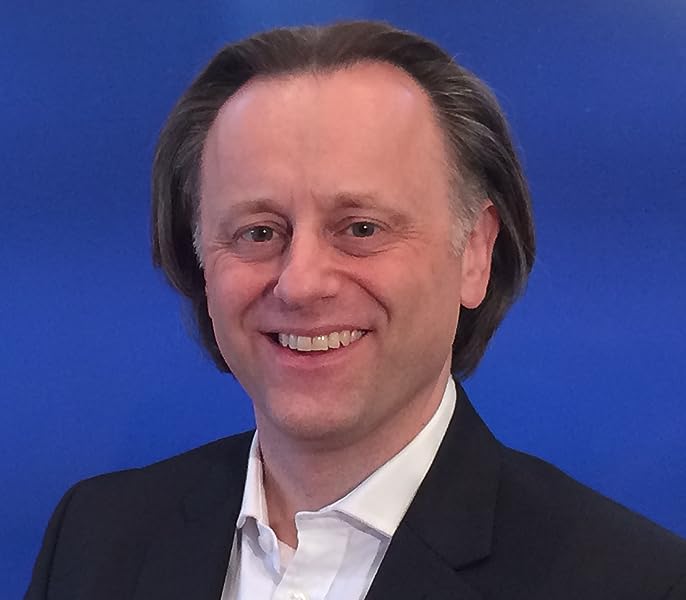 Disrupt IT: A new model for IT in the digital age Kindle Edition

Matt Ballantine
4.0 out of 5 stars Structure and strategy for the future of the IT department
Reviewed in the United Kingdom on 7 March 2014
Verified Purchase
Over a decade ago I was introduced to a book that had a major influence over my subsequent career. Strategic Planning for Information Systems by John Ward and Joe Peppard constructed a model of IT management driven by business outcome rather than technology. It's also one of the most impregnable books I've never finished.

Ian's new book Disrupt IT: A new model for IT in the digital age describes a structure and series of competencies that will make an IT function business outcome-focused in 2014 and beyond. It's thankfully written in a much more practical and conversational style than the hardcore academia of Ward and Peppard's, and as a positioning for IT leadership teams there is clear, sensible thinking here.

Cox describes how the landscape of technology in business has been transformed in recent years by the consumerisation of devices, the commoditisation of computing power and systems through the ubiquitous nature of the internet, and the resultant devolution of IT decision making out of the CIO's hands. In that world, IT management models that focus on centralised control of technology, rather than the procurement and delivery of services, are no longer fit for purpose.

To address this new set of challenges, Ian proposes a new set of core competencies for IT majoring on themes such as enterprise and data architecture and project management rather than tech in-depth. He then looks at how the CIO, the IT department and the overall organisation needs to change to make this a reality.

There's a way in which I found Cox's book a little depressing. The advice to CIO's in about their own approach can be summarised as "don't be a nerdy pillock and for heaven's sake go out and talk to people". That any CIO needs to be told that is a tragedy for the profession, but I know that so many still do.

I also wonder, as the eternal iconoclast, if Cox goes far enough to paint a picture of true disruption. If you were to design an organisation from the ground up today, would their even be an IT department? Whilst that kind of green field isn't reality, going through that approach can be beneficial. It gets one past the paradox summed up in the old line

I'm still of the view that a radical transformation of IT could place it in the realm of the "soft" and people and change rather than the hard of systems and process. But Ian is better attuned to an audience that needs to be told they need to talk to people as part of their job than I.

Disrupt IT is a good point from which to help move the technology function from the clichés of old to a business-focused partner of the present and beyond, especially for organisations in industries where broader digital disruption is in its earlier stages. It's practical, and actionable, which can so often be the downfall of such titles.

But if any of this stuff is news to you and you are, say, the CIO of a media company, you probably won't be for much longer.

B. A. Howard
3.0 out of 5 stars Good content let down by amateur production... don't judge a book by it's cover
Reviewed in the United Kingdom on 25 September 2015
Verified Purchase
This is a self-printed book, or at least it feels like it is. The book is dry, very dry yet Cox's methods are common sense, easily understood and difficult to argue with. It's just the production quality of this book with it's poor printing and standard PowerPoint diagrams are all a bit too amateur.

Like other business books this could be condensed into something a quarter of the length, but that seems to be the norm these days.
Read more
Report abuse

K J Gallagher
5.0 out of 5 stars Interesting, thought provoking and timely look at the role of IT
Reviewed in the United Kingdom on 3 March 2014
Verified Purchase
Ian has produced a very useful book for everyone working in IT and interested in the way they can adapt to the future. He outlines the both the challenges and opportunities which disruptive technologies bring to businesses and the Technology leadership team.

The book rightly focuses on the contribution technology can make as a differentiator giving competitive advantage. This means that CIOs and their teams need to ensure that they have a broad view of the business and a focused view of what will make a difference. The customer experience and customer behaviour are central concerns of all businesses; Technology teams need to develop the skills to ensure that their organisation can use their understanding of behaviour to give a great customer experience.

Disrupt IT has a set of practical principles for IT & CIOs to measure ourselves against as we go on the journey from service provider to a key part of the organisation’s digital future. Well worth a read.
Read more
Report abuse

Ash Mahmud
5.0 out of 5 stars Ian says it all in the most simple way with maximum impact
Reviewed in the United Kingdom on 26 March 2014
Verified Purchase
I have known Ian for over 2 years and I am always amazed with his deep understanding of how IT and Business needs to be fused to add value to the front end of the business.

As Ian has addressed and my experience also entails that IT is left behind to address infrastructure and other non critical business functions, even these tasks are been diminished by cloud computing.
This book helps IT professionals to gain insight on how to align, manage and create interface with key stake holders to give them value and get back into the driving seat.

IT has become a much more democratic system and dispersed across the organisation with more reliance than ever before, the question is how do CIO's support the business and bridge gaps, Ian discussed this and offers systematic solutions and with his wealth of experience built over the years this is a book that should not be ignored.

Simple to read, not too large to digest and offers advice from years of experince.
Read more
Report abuse

Richard Smith
5.0 out of 5 stars Thought Provoking & Insightful
Reviewed in the United Kingdom on 4 March 2014
Verified Purchase
As someone who has recently moved into a 'shadow IT' role this book was a fascinating read.

It can be complex to organise a large number of thoughts and strategies into a format that is easy to understand and digest however Ian has achieved this brilliantly with DisruptIT. Those across the organisation will instantly relate to the issues discussed and very quickly spot some personality traits from their own IT departments and their business.

I would recommend this book to those leading IT, working in IT and interacting with IT. Upon finishing the book you will have a very clear image in your mind of what the future has in store as well as an idea of how you can go about getting there.

Once again - great read.
Read more
Report abuse
See all reviews
Get FREE delivery with Amazon Prime
Prime members enjoy FREE Delivery and exclusive access to movies, TV shows, music, Kindle e-books, Twitch Prime, and more.
> Get Started
Back to top
Get to Know Us
Make Money with Us
Let Us Help You
And don't forget:
© 1996-2020, Amazon.com, Inc. or its affiliates