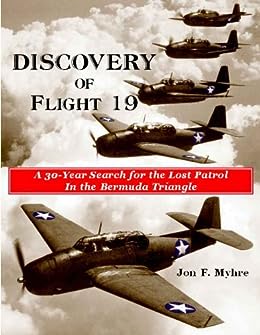 by Jon Myhre (Author) Format: Kindle Edition
See all formats and editions
Sorry, there was a problem loading this page. Try again.
The story of a quarter of a century of research and analysis of Flight 19, the search and discovery of a TBM Avenger, and the raising of the aircraft to the surface. On December 5th of 1945, Flight 19 vanished off the Florida coastline, seemingly forever. The five Grumman TBM Avengers held 14 crew members on a training mission that went bad. Forty-five years later, Aviation Expert Jon F. Myhre discovered Flight 19 and brought an Avenger to the surface. This is the story of one man’s personal mission to bring these men home. Retrace the mission from land to sea and back. See how a TBM-1C was pulled from the sea floor and two crash sites were located on land. None of the men of Flight 19 died within the infamous Bermuda Triangle. Discovery of Flight 19 is the Greatest Aviation Mystery of America. 202 pages with 150 illustrations, 50 of which are unpublished.
Read more
Previous page
Next page

3.8 out of 5 stars
3.8 out of 5
16 global ratings
How are ratings calculated?
To calculate the overall star rating and percentage breakdown by star, we don’t use a simple average. Instead, our system considers things like how recent a review is and if the reviewer bought the item on Amazon. It also analyses reviews to verify trustworthiness.

A Customer
5.0 out of 5 stars An interesting read for anyone who's interested in the Bermuda Triangle!!!
Reviewed in the United Kingdom on 28 May 2013
Verified Purchase
I've always had an interest in the Bermuda Triangle, stemming back to when I was just a child. It first started when I saw a fictional TV-film, depicting the devil as being behind the mysterious and strange goings on, that the place is notorious for today. As an adult however, I have seen and read over the years, many "weird & wonderful" books and documentaries regarding this subject, and when I say "weird & wonderful" I mean there are a lot of very absurd explanations! One of the biggest mysteries surrounding the place is the vanishing of flight 19, and I have to say that out of all of the books that I've read on this subject, that this book has to be the definitive one. Instead of just blaming the entire event on some unexplained phenomenon, the author has clearly spent a great deal of time researching the event and using his experience as a pilot, he gives us his educated explanation of the event. It's just a pity the author's health didn't allow him to prove all of his theories. Hopefully, one day somebody else will be able to prove him right, but until then I'm sure the mystery will continue to fascinate us!
Read more
One person found this helpful
Report abuse

Mike Lewis
4.0 out of 5 stars intriguing theories and a well-made case...
Reviewed in the United States on 15 July 2013
Verified Purchase
I must confess I elected to buy this book having read Gian J Quasar's excellent They Flew Into Oblivion, which had me totally hooked. So which one did I prefer? Quasar's fine effort just shades it, but I would urge anyone with an interest in the riddle of Flight 19 to buy The Discovery of Flight 19 as well.

While Quasar's approach is more clinical, Myhre - a Vietnam War vet - writes with real passion. Both have different opinions of the eventual fate that befell Flight 19, based largely on their contrasting interpretations of those harrowing radio messages.

Despite Myhre's conviction, I simply don't believe that the flight would have dispersed in the manner in which he claims. He boldly outlines the probable crash site of each plane, by (in my view anyway) possibly laying too great an emphasis on purported sightings of flares, fires and even liferafts on what was, clearly, a long, confused, dark and stormy night.

But hell, who am I to quibble? This guy has, over the past 30 years, moved heaven and earth to try and solve the greatest aviation mystery in history - and could well have succeeded.

For me, the big question is what would have resulted had authors of the calibre of Quasar and Myhre delved into this modern mystery of the skies when Bermuda Triangle fever was all the rage back in the 1970s?

Would the 'Triangle of Doom' still have carried such credence today? I very much doubt it...

One final intriguing footnote: both authors mention the curious case of radioman George Paonessa who - bizarre as it may seem - could somehow have been a Flight 19 survivor. If either can stand up this possibility that clearly makes a book in itself.

Investigations into Paonessa are continuing so we may still not have heard the last word on this unique and unsettling episode.
Read more
7 people found this helpful
Report abuse

Cliff J. Martin
4.0 out of 5 stars Excellent history of Flight 19!
Reviewed in the United States on 31 March 2014
Verified Purchase
The book was full of information that keeps the search interesting. The only problem I had with the book - is on the Kindle, the print skips all over the place from page to page. Example: One paragraph had the first five lines on one page, might be continued two pages later, with a lot of unrelated text between the two. Aside from this, the book really makes you want to go hunt for some Avengers.
Read more
One person found this helpful
Report abuse

Dennis Dilley
3.0 out of 5 stars Not an easy Read
Reviewed in the United States on 26 November 2014
Verified Purchase
I found this book to at times leave me lost in the Authors writing terms used I did not understand, parts of the book I almost wanted to skip, and others were A+
I feel the reader of this book should have a background in flying to stay 100% in the reading.
Read more
Report abuse
See all reviews
Back to top
Get to Know Us
Make Money with Us
Let Us Help You
And don't forget:
© 1996-2021, Amazon.com, Inc. or its affiliates