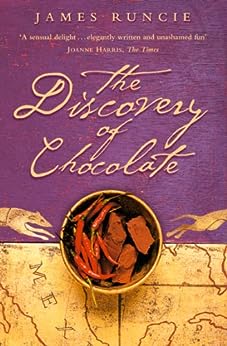 The Discovery of Chocolate: A Novel Kindle Edition

‘The Discovery of Chocolate is as intoxicating and addictive as the substance it describes. The novel is a triumph of inspired imagination…’
Financial Times

‘The Discovery of Chocolate is a sensual delight which does not take itself too seriously and leaves a lingering sweetness in its wake. More books should be like this; elegantly written, unpretentious and unashamed fun.’
Joanne Harris, The Times

When Diego de Godoy leaves his native Seville and takes a ship for the New World, he is hoping to find a treasure that will make him worthy of the hand in marriage of the beautiful Isabella de Quintallina.

He finds more than he bargained for.

Fighting alongside Cortes and his conquistadors Diego falls in love with a Mexican woman and she initiates him into the sensuous secret of chocolate.

From the moment he is separated from his lover, however, Diego and his ever-faithful greyhound Pedro are destined to wander throughout the world and down the centuries in search of the fulfilment they knew for that brief time, seeking the perfection of chocolate and the meaning of life.

Full of excitement, humour and not a little sadness, the drama of Diego's quest is played out against a background of great cities, by a cast of richly colourful characters, including the Marquis de Sade and Sigmund Freud, to name but two.

'The Discovery of Chocolate' is a fabulous delight, as rich and exotic as the luxurious confections that Diego himself creates.

James Runcie is an award – winning film-maker whose work includes ‘Miss Pym’s Day Out’, ‘Childhood’, ‘Great Composers’, ‘How Buildings Learn’, ‘The Figure on the Cross’, ‘Henry Moore’, and ‘The River’. He was a Producer with BBC Arts and Classical Music from 1988–1999, but now works out of Oxford Television where he has a four film deal with Channel 4. He has just completed “Saturday”, “Sunday” and “My Father”, an intimate portrait of his father, Lord Runcie, the former Archbishop of Canterbury, which was shown on December 16th.

In 2001 he will be directing a feature length documentary on The Great Fire of London, again for Channel 4.

He was part of the original team that created ‘The Late Show’ for BBC2, and has also worked in the theatre, directing a Glasgow fashion show, Liz Lochhead’s feminist review ‘Nippy Sweeties’, Harvey and the Wallbangers, and T.S. Eliot’s ‘The Wasteland’ on the main stage of the Barbican for the Royal Shakespeare Company.

He has scripted three films for BBC Television, reviewed books for ‘The Daily Telegraph’, and has written feature articles for publications as diverse as ‘The Observer’, ‘The Evening Standard’, ‘She’, ‘Country Living’ and ‘Marxism Today’. He also served on the Arts Council Literature Panel from 1990–1994.

He is unashamedly forty-one, and lives in St. Albans with his wife, the Drama Producer Marilyn Imrie, and two daughters, Rosie and Charlotte.

‘The Discovery of Chocolate’ is his first novel, written because he finds the prospect of everlasting life far more frightening than death, and because, according to the April 2000 issue of Vogue Magazine, “It’s official. People who eat chocolate live longer than those who do not.”

Like most people who have worked in the theatre, he has also worked as a waiter, and brought chocolate to many of the tables of the rich and famous. His experiments with chocolate in his own kitchen however, have been little short of disastrous.

3.6 out of 5 stars
3.6 out of 5
33 global ratings
How are ratings calculated?
To calculate the overall star rating and percentage breakdown by star, we don’t use a simple average. Instead, our system considers things like how recent a review is and if the reviewer bought the item on Amazon. It also analyses reviews to verify trustworthiness.

Margaret L
4.0 out of 5 stars A good story
Reviewed in the United Kingdom on 30 March 2014
Verified Purchase
This is a story spanning several centuries - all about a man who discovers chocolate and love and how he develops the chocolate and re-finds his love. Try Runcie's other book 'The Colour of Heaven' which is also good.
Read more
Report abuse

Rhona Raeburn
3.0 out of 5 stars Chocolate thru the ages!
Reviewed in the United Kingdom on 2 August 2015
Verified Purchase
Bit weird but kind of compelling about a man who lives for a thousand years
Read more
Report abuse

Amazon Customer
4.0 out of 5 stars Four Stars
Reviewed in the United Kingdom on 6 April 2017
Verified Purchase
Runcie is a great writer and in this novel explores characters that are unique in a strange fantasy
Read more
Report abuse
See all reviews
Back to top
Get to Know Us
Make Money with Us
Let Us Help You
And don't forget:
© 1996-2021, Amazon.com, Inc. or its affiliates