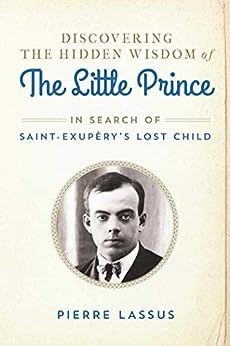 Discovering the Hidden Wisdom of The Little Prince: In Search of Saint-Exupéry's Lost Child Kindle Edition

Pierre Lassus is a child psychologist and is the author of a number of works about the consequences of violence visited on children as well as a biography of Albert Schweitzer. He is the director of the Institute for Victimology and honorary director general of the French Union for the Rescue of Children. He lives in Paris, France.

Gretchen Schmid is a translator and writer and works at Penguin Books. --This text refers to an alternate kindle_edition edition.

"A touching and deeply moving analysis of a book that is cherished by millions. It is hard to imagine that its fans will not appreciate what Lassus has uncovered."—Booklist

"The story behind one of the world's most popular books. . . . Many will enjoy learning about Saint-Exupéry and his life and how he came to write such a beloved book."—Kirkus

“Luminous and enthralling . . . Everything that contributes to its magic is gradually explained.” —L'Express

"His subtle analysis illuminates the universality of the Word according to Saint-Exupéry."—Observateur

"Pierre Lassus, a psychotherapist specializing in the world of childhood, wanted to understand by what paths this charming little blond boy could move such a large audience. . . .The message of The Little Prince, according to him, connects it to the questionings in the Old and New Testaments. A voice in the desert, a sheep, an innocent child wiser than the adults, who 'sees with his heart better than with his eyes.' A child who falls from the sky to open the heart of a man who was lost. . . ."
—Le Monde

"For the writer, The Little Prince was the opportunity to return to his childhood, in search of himself."
—Inexploré

"The author brings out the spiritual testament the universal message of this symbolic fable."—L'Echo des Vosges --This text refers to an alternate kindle_edition edition.

4.6 out of 5 stars
4.6 out of 5
21 global ratings
How are ratings calculated?
To calculate the overall star rating and percentage breakdown by star, we don’t use a simple average. Instead, our system considers things like how recent a review is and if the reviewer bought the item on Amazon. It also analyses reviews to verify trustworthiness.

Norma Strong
5.0 out of 5 stars What is love❓
Reviewed in the United States on 11 December 2020
Verified Purchase
This classic is filled with so much wisdom. I read it with my 8th grade class and it opened up so many questions and discussions relevant in their young lives. Recommend it highly. We all had our own copy which we highlighted and annotated for future walk back through the themes and how they applied or changed as students grew older. Sort of like a time capsule of their metamorphosis.
Read more
Report abuse

Kindle Customer
5.0 out of 5 stars Enchanting
Reviewed in the United States on 21 July 2019
Verified Purchase
A delightful little book. Struggle of a soul, a romance of a chi!d who never grew up and thus became 'a little child to lead us.'
Read more
One person found this helpful
Report abuse

Cindi Sho
4.0 out of 5 stars Makes sense!
Reviewed in the United States on 10 January 2021
Verified Purchase
As a Believer, this book not only cleared up much of the speculation surrounding this classic tale, but also filled me with joy! Well done, good and faithful friend!
Read more
Report abuse

Jessica
5.0 out of 5 stars Great book
Reviewed in the United States on 19 June 2019
Verified Purchase
I love this book. It made my daughter love the little prince.
Read more
2 people found this helpful
Report abuse
See all reviews
Back to top
Get to Know Us
Make Money with Us
Let Us Help You
And don't forget:
© 1996-2021, Amazon.com, Inc. or its affiliates