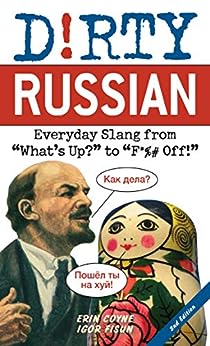 Erin Coyne holds various degrees in Russian-related fields from Fordham University, Georgetown University, and UC Berkeley, where she is currently making depressingly slow progress on a PhD in Slavic Linguistics while teaching Russian classes on the side. In a former life, she served as a Peace Corps volunteer and later worked as an NGO program director which, for better or for worse, exiled her to nearly ten long years in the former Soviet Union. Her interests include yoga, long, alcohol-fueled train rides through Eastern Europe, and TV. Lots and lots of TV. In addition to English and Russian, Erin speaks six other languages with varying degrees of success.

Igor Fisun is a native of Kiev, Ukraine, which, in moments of nationalist pride, he prefers to spell "Kyiv." He is a former student of Kiev PTU, where he quickly abandoned all interest in ever holding down a real job and instead embarked upon a career in freelance engraving. His native languages are Russian and Ukrainian, and he hopes someday to learn English well enough to talk his way out of a traffic ticket. His interests include cooking, Japanese art, cheap wine, and pissing people off on internet forums. He is ridiculously proud of his orchid collection. --This text refers to the paperback edition.