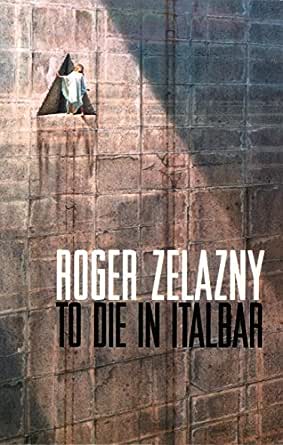 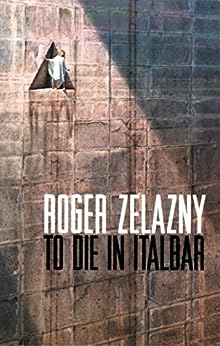 To Die in Italbar Kindle Edition

TO DIE IN ITALBAR By Roger Zelazny In To Die in Italbar, the galaxy is in chaos, with people falling prey to an unidentifiable disease. Only one man has the ability to help -- a man who can heal or kill with a touch. Known only as "Mr. H," he is being sought after by everyone, but for vastly different reasons. Even Francis Sandow is seeking him, and may be the only one with a clue as to who H really is ...

In the bonus novel A Dark Travelling, James Wiley is an "ordinary" 14-year-old who has lost his scientist father to a parallel world in the darkbands. With the help of Becky, his sister with magical powers, Barry the exchange student and Uncle George, the werewolf, James goes in search of his parent. But he must take care: for if there just happens to be a full moon at the wrong moment, James's itchy palms might lead him into trouble...

• To Die in Italbar is the sequel to Zelazny's novel Isle of the Dead, published by ibooks in a compilation volume with Eye of Cat.

• Zelazny was the bestselling author of the ten-volume Chronicles of Amber series of fantasy novels, as well as Psychoshop (written by Alfred Bester).

Zelazny wrote many novels, short stories, and novellas, including Nebula and Hugo Award winners 24 VIEWS OF MOUNT FUJI, BY HOKUSAI, PERMAFROST and HOME IS THE HANGMAN.
click to open popover

Runmentionable
4.0 out of 5 stars "This is really good! Oh, is that it?"
Reviewed in the United Kingdom on 21 August 2017
Verified Purchase
To Die In Italbar follows on from Zelazny's earlier novel Isle of the Dead. It's not a sequel but it's set in the same continuity, some time later, and IotD's protagonist, Francis Sandow, returns to play a substantial supporting role. If you come to this without having read IotD first, you may well be confused at times.

That aside, it's an enjoyable, accessible and pacy interplanetary romp, with an unusually tight plot (for Zelazny, anyhow) taking place against, but not subsumed in, a familiar backdrop of galactic conflict. It's full of interesting and inventive details, and diverse, well-portrayed characters. It differs from the standard Zelazny approach in that there isn't a super-powered central character, and also in adopting multiple viewpoints for different strands of the narrative. This is helpful, as it curtails the tendency to over-write which sometimes afflicts the author's work. If IotD is, at heart, a novel about responsibility, this is a novel about obsession.

Unfortunately, the climax feels rather hurried - the crucial action largely takes place off-camera - and falls a little flat, resulting in a disappointing end to an otherwise sound, and enjoyable, if rather conventional, SF novel. Consequently, it's three-and-a-half stars, really, but I've given it four as three seems a little harsh on a book which has quite a lot to recommend it.

This edition comes with a fantasy novella, A Dark Travelling, which you can almost tell is going to be rubbish just from the vague title. It has an engaging narrative voice - fans of the Cramps will be pleased to note the hero/narrator is a teenage werewolf - and a charming Golem, but the scenario is a muddled mess of parallel worlds and magic and the plot, after a bright start, is intensely ponderous, even though it's a relatively short tale. It comes across as the start of a YA series which wasn't good enough to get to a second instalment. Two stars for this one.

Good read for all that.

Ian G.
4.0 out of 5 stars Beware Double Aspected Blue Alien Goddesses,
Reviewed in Canada on 16 October 2019
Verified Purchase
The second book featuring Francis ('Call Me Frank') Sandow, the "worldscaper" with the alien God complex. Sandow is the only human to be taught the art of making habitable planets by the ancient Pei'ans. Part of his initiation involves taking on the aspect of one of the hundreds of Pei'an gods, in this case Shimbo, Shrugger of Thunders. The plot revolves around Sandow being called upon by the pei'an priesthood ("Racial discrimination, that's what it is") to battle a particularly dangerous goddess, who's gone rogue. Sandow plays a relatively minor role in this book, compared to ,"Isle of the Dead". Zelazny chooses to spin a more convoluted tale, this time, with much of the story told by secondary characters. It's an effective device and allows Zelazny to fill in the background of Sandow's universe. The author uses the 'man as God' theme in a number of his books, notably the Amber series and Lord of Light. This one, involving the Pei'an pantheon, to me is the most interesting (but everybody has their favourite).
Read more
Helpful
Sending feedback...
Thank you for your feedback.
Sorry, we failed to record your vote. Please try again
Report abuse

illiandantic
4.0 out of 5 stars Two Very Good Short Novels in One Book
Reviewed in the United States on 26 November 2014
Verified Purchase
I'm not very happy with the packaging of this book. It's Roger Zelazny's "To Die in Italbar" coupled with his "A Dark Traveling." The two stories are fine, but they should never have been published together. They're not related in any way.

The first story ("To Die in Italbar") is set in Zelazny's Pei'an universe and features a cameo role for Francis Sandow (his protagonist in "Isle of the Dead"). Interestingly, according to the Wikipedia entry for the story, Zelazny said:

"If I could kill off one book it would be To Die in Italbar. I wrote that in a hurry to make some money after I quit my job."

It's interesting because I think it's a pretty darn good story. Oh, it's a bit short, the characterizations are fairly shallow, and Sandow's role is practically non-existent. But, the writing is all Zelazny, it's decently paced, and it's interesting.

I was really surprised by the second story ("A Dark Traveling"). First, it's a Young Adult (YA) story (apparently, his only such). Second, I actually enjoyed it. Usually, in these two-story compendiums, one story is good and the other is bad. And, since this one is YA, I really expected something not-that-good. But, from my point of view, both are good in this one. It's an interesting book in that the characters remind me a lot of those in Heinlein's YA material. Yet, again, the story has Zelazny all over it. I've got only two complaints about this one: first, the ending is a bit abrupt; and second, the characters are a couple of years too young for their behavior (even for Heinlein).

It's surprising since these two stories are so far apart in just about every respect. But, we've got two equally good stories packaged in one book here. So, happy to rate it at a Very Good 4 stars out of 5.

Walt Boyes
5.0 out of 5 stars Zelazny the Great
Reviewed in the United States on 20 October 2014
Verified Purchase
Zelazny isn't nearly as forgotten as some people think. His writing is still clear, crisp, unaffected and brilliant. To Die in Italbar is one of his classics and, like Isle of the Dead, Creatures of Light and Darkness, and Lord of Light, among others, deals with the contradictions of godhood, and the goodness of the gods. If you have never read Zelazny, start with Isle of the Dead, to which To Die in Italbar is the sequel. This is simply great writing, like we have too little of in this era of science fiction.
Read more
2 people found this helpful
Helpful
Sending feedback...
Thank you for your feedback.
Sorry, we failed to record your vote. Please try again
Report abuse

Bad Wolf
4.0 out of 5 stars Vintage Zelazny! I see the beginnings of his major works here
Reviewed in the United States on 16 December 2018
Verified Purchase
Too short. Always leave them wanting more I guess. Major themes begun here. I like the shape changing sub plot.
Read more
Helpful
Sending feedback...
Thank you for your feedback.
Sorry, we failed to record your vote. Please try again
Report abuse

karennallen
5.0 out of 5 stars Five Stars
Reviewed in the United States on 19 December 2017
Verified Purchase
Loved this book and the carry over of the main character from his book "The Isle of the Dead"
Read more
Helpful
Sending feedback...
Thank you for your feedback.
Sorry, we failed to record your vote. Please try again
Report abuse

Dan Russell
4.0 out of 5 stars Another excellent story by Roger Zelazny
Reviewed in the United States on 13 May 2015
Verified Purchase
Another excellent story by Roger Zelazny. He does it so much better than the ones who write in his name. Full of humour and unusual plots.
Unfortunately the script has been edited (not sure if it has) by a person whose first language is not English. For instance the word burned is printed as bummed several times. There are other mistakes in the same vein.
Notwithstanding that, it was a pleasure rereading this book.
Read more
Helpful
Sending feedback...
Thank you for your feedback.
Sorry, we failed to record your vote. Please try again
Report abuse