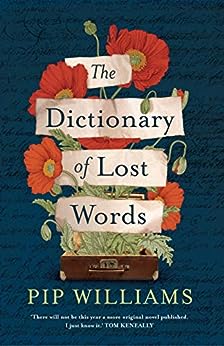 Inspired by a wisp of fact - a single word accidentally omitted from the Oxford English Dictionary - Pip Williams has spun a marvelous fiction about the power of language to elevate or repress. This is a novel that brings light not only lost words, but the lost stories of women's lives. It is at once timely and timeless.

In the annals of lexicography, no more imaginative, delightful, charming and clever book has yet been written. And if by writing it Pip Williams has gently rapped my knuckles for wrongly supposing that only white English men led the effort to corral and codify our language, then I happily accept the scolding. Her wonderfully constructed story has helped entirely change my mind.

What a novel of words, their adventure and their capacity to define and, above all, challenge the world. There will not be this year a more original novel published. I just know it -- Thomas Keneally --This text refers to the hardcover edition.

Pip Williams was born in London, grew up in Sydney, and now divides her time between the UK and Australia's Adelaide Hills. She is the author of One Italian Summer, a memoir of her family's travels in search of the good life, which was published in Australia to wide acclaim. Based on her original research in the Oxford English Dictionary archives, The Dictionary of Lost Words is her first novel. --This text refers to the hardcover edition.

In 1901, the word ‘Bondmaid’ was discovered missing from the Oxford English Dictionary. This is the story of the girl who stole it. --This text refers to an out of print or unavailable edition of this title.
Read more

4.5 out of 5 stars
4.5 out of 5
3,301 global ratings
How are ratings calculated?
To calculate the overall star rating and percentage breakdown by star, we don’t use a simple average. Instead, our system considers things like how recent a review is and if the reviewer bought the item on Amazon. It also analyses reviews to verify trustworthiness.

Philomena the Wombat
5.0 out of 5 stars Love, lexicography, loss: A voice not demanding we see the truth of our language, but whispering it
Reviewed in Australia on 30 April 2020
Verified Purchase
Warning: Some spoiler alerts below:

I didn't think it would be possible to enjoy (and learn from) a better book on lexicography than Winchester's 'The Surgeon of Crowthorne': I was wrong.

The Dictionary of Lost Words is a stately walk through Victorian England's values, from a woman's point of view, but always with the gentle overlay of the Oxford English Dictionary's lexicography. The facts of the task of compiling the OED were fascinating, but more-so the philosophical questions central to this book - What defines 'validity' in a word? Must it have been written down? Does a tabloid newspaper coining a new word, constitute its having been 'written down'? Is slang acceptable? Is slang only acceptable after it's been in use for a time? Should profanities be included, and if not, why not? The protagonist, Esme has to address these questions, then in a profoundly chauvinistic society, she has to present and argue her case. Her 'lost words' are the oral vocabularies of women. Not a topic many men in Victorian England were interested in.

Pip Williams' portrayal of English as a changing language, and her recognition of its inbuilt sexism is fascinating. As Esme observes; Nearly every (polite) term for a woman (such as Miss, Mrs, maiden, harlot) informs the hearer of the virginity-status of the woman concerned... and none of the male terms do equally. Even the derogatory ones such as 'git' do not allude to a man's virginity status.
Then there are the words for women, which have no male equivalent - 'scold'. Blame encompassed in just one word.

As in real life, nothing happens quickly and with Esme's accidental death, some actions are left to those who come after. This may disappoint those who like all the loose ends of a story tied up before the final page. But these characters, for the most part, are based on real individuals.

Finally this is a love story - typical of the age. Love finally declared... too late, bound by the constraints of the society (which impose on Esme a belief she is not worthy of happiness in marriage), and ended too soon by the horrohs of WWI.

I don't know who I wish I could have dinner with more.... Pip Williams, or Esme.
Read more
10 people found this helpful
Helpful
Report abuse

Susan Burrell
4.0 out of 5 stars Words shape and mis-shape our perception of our world
Reviewed in Australia on 22 June 2020
Verified Purchase
This is a well- crafted book, exploring the well- founded suspicion that, as in most things, it is the opinions and decisions of men in compiling the first Oxford English Dictionary, which thereby stifle and dismiss the lived experience of women - to our great loss. I particularly liked Esme’s insistence that the words of illiterate and uneducated women were as worthy of recording as those words that had made their way into print.
Read more
5 people found this helpful
Helpful
Report abuse

Dennis Rutzou
4.0 out of 5 stars This is a very absorbing reading experience.
Reviewed in Australia on 15 September 2020
Verified Purchase
I read this one a few months ago by mistake as I rarely read fiction so this was a real surprise for my wife. It's a great effort by a first time novel writer as she manages to intertwine two very interesting historical themes in the one narrative, namely the researching and writing of the Oxford Dictionary and the suffragette movement. No mean feat. I have recommended it to many of my friends and no one has come after my blood so far, so they must have liked it as well.
Read more
3 people found this helpful
Helpful
Report abuse

Give me something decent to read!
5.0 out of 5 stars A wonderful escape from the dreariness of script-for-movie-deal books.
Reviewed in Australia on 18 August 2020
Verified Purchase
What a topic! Superb escape into another world with characters, settings and theme that are totally unexpected. So welcome after so much predictability in current writings. So much of our new choice is written in the hope of landing a movie deal; it is delightful and wonderful to rediscover the joy in reading a real book.
Read more
3 people found this helpful
Helpful
Report abuse

LaineeK
4.0 out of 5 stars A good read
Reviewed in Australia on 7 September 2020
Verified Purchase
A great read ,fiction based on fact, of the historical finding and collating of words for the first Oxford Dictionary.
I enjoyed the main character Esme who was collecting words that were either discarded by the men in the group or words that women used which were discarded also. She did her research in the markets where the lower classes worked.
There is a lot to say about this book which kept me glued to it however I felt the ending was a bit rushed although neatly tied together.
Read more
One person found this helpful
Helpful
Report abuse

Vonnie54
5.0 out of 5 stars Well crafted and mesmerising
Reviewed in Australia on 31 July 2020
Verified Purchase
If you wrote a synopsis of this story you could imagine a dull read about words and the creation of dictionaries. But Pip Williams takes you through a wormhole into a past time when women, regardless of their intelligence or social standing, were seen as facilitators to the needs of men...and were defined by that role.
A delightful read for anyone who loves language and the power of words.
Read more
One person found this helpful
Helpful
Report abuse

Helereb
5.0 out of 5 stars A beautiful and addictive story.
Reviewed in Australia on 26 January 2021
Verified Purchase
I absolutely loved this book about the origins of the Oxford dictionary. I was fascinated by the process of this creation which was so detailed and painstaking but it also opened another world - that of women behind the scenes. The main story of the book was of course about the making of the dictionary but the other story behind that was just as fascinating and and heart wrenching hung. A wonderful insight into an old and charming world.
Read more
Helpful
Report abuse
See all reviews

W. A. R
5.0 out of 5 stars A beautiful evocative read
Reviewed in the United Kingdom on 28 April 2021
Verified Purchase
This is such a beautiful story. The history of words in the English Oxford dictionary was fascinating and I loved learning about the process involved in the Scriptorium.
The characters are wonderful- so warmly described; from Esme, who feels the responsibility for all of the discarded and unwanted words, to Lizzie who is there for Esme at every turn, to Mabel who provided some of the more ‘fruity ‘ words for Esme’s collection. All women who prove that their voices count as much as the next man.
A truly evocative read that will stay with me for a long time.
Read more
5 people found this helpful
Report abuse

E. Ward Thomas
5.0 out of 5 stars The creation of the Oxford dictionary as a love story
Reviewed in the United Kingdom on 3 May 2021
Verified Purchase
Prompted by the film "the Professor and the Madman" with Mel Gibson as the Editor of the Oxford Dictionary, I spotted this in a newspaper review. Written from the perspective of a daughter of the team, this is beautifully crafted and emotionally in love with both words and their origin. It is very evocative of the treatment of girls and the value of wealth and family by society at the time. A leader for the best of 2021 so far.
Read more
4 people found this helpful
Report abuse

A Wilkin
5.0 out of 5 stars Moving, empowering and reflective.
Reviewed in the United Kingdom on 25 May 2021
Verified Purchase
This story made me laugh and cry and feel everything in between. I got absorbed into the life and days of Esme and followed her journey with eagerness. Pip Williams has given life to the women of the Oxford English Dictionary and to those whose words did not make the cut. All while taking into account the lives, hopes and fears of women during the start of the 20th century, the suffragettes and WW1. I highly recommend this book, and while this may not mean much from a stranger on the Internet I encourage you to give this book a shot. It is moving, empowering and reflective.
Read more
One person found this helpful
Report abuse

C.Campbell
5.0 out of 5 stars Language and power and the Oxford English Dictionary
Reviewed in the United Kingdom on 1 May 2021
Verified Purchase
This is such an easy book to read. A great story about love and family and grief and caring for one another. Set around the Scriptorium, first home of the OED, and the life of great lexicographer James Murray and his team of assistants. A real tear-jerker, it draws the reader in, perfect holiday book. Underpinned by a series of sobering reflections on how language is enabled and limited by gender, power and social class, against the backdrop of the suffragette movement. Highly recommended.
Read more
Report abuse

TrishA
5.0 out of 5 stars A feel good book
Reviewed in the United Kingdom on 10 May 2021
Verified Purchase
This is a real feel good story based on real events. Great attention to detail
Read more
2 people found this helpful
Report abuse
See all reviews
Back to top
Get to Know Us
Make Money with Us
Let Us Help You
And don't forget:
© 1996-2021, Amazon.com, Inc. or its affiliates