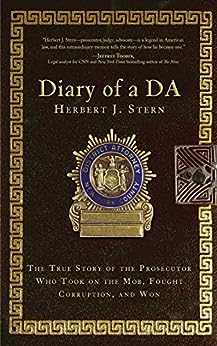 Diary of a DA: The True Story of the Prosecutor Who Took on the Mob, Fought Corruption, and Won Kindle Edition

A rare look inside the world of the federal prosecutor.... Diary of a DA is for any fan of the loosely, fictional Sopranos and Boardwalk Empire television shows. --Tribune Observer

Stern draws a sharp distinction between "doing law and doing justice" packed into [the book] are triumphs that explode from the page like firecrackers, chronicling one of the great law enforcement records of the past half-century. --Fortune

Extremely well written, Stern s account of his personal and professional quest to uphold the law and justice is finely realized and quite impressive. --Publishers Weekly

An honest examination of how the justice system really works in the minor criminal courts of New York City. . . .more than a page-turner of a true crime story. --The Star-Ledger

Stern is a fascinated observer, thoroughly honest in both his job and his writing about it....It details the gritty realities of a prosecutor's office that few people witness. --Philadelphia Inquirer

Extremely well written, Stern's account of his personal and professional quest to uphold the law and justice is finely realized and quite impressive. --Publishers Weekly --This text refers to the hardcover edition.

Herbert J. Stern is considered one of the most famous district attorneys in the history of the United States. He helped catch the killers of Malcolm X, indicted the head of the French CIA for shipping one hundred pounds of heroin into the United States, prosecuted the real-life Tony Soprano, and convicted the mayors of Newark, Jersey City, and Atlantic City. --This text refers to the hardcover edition.

_citizen
5.0 out of 5 stars Must read for prosecutors
Reviewed in Canada on 25 March 2017
Verified Purchase
Great insight into the dynamics of the DA and DoJ office. Herein lie incredible tales from a ADA faced with the overbearing task of prosecuting crooks from all levels of the city.Stern's insight into this world is a must read for all prosecutor's and prosecutor-hopeful's.

I ordered the book used from 'More Than Words CA' and it arrived in great quality.
Read more
Report abuse

ROBERT H BLUMBERG
5.0 out of 5 stars FASCINATING
Reviewed in the United States on 9 September 2012
Verified Purchase
I'd very much enjoyed Stern's remarkable account of the trial of the East Berlin skyjackers in Judgment in Berlin and had looked forward to reading this memoir, which recounts his experiences in the NY DA's office, then the excitement and difficulty of fighting corruption as the US attorney in New Jersey during the 60's and 70's when everyone's hand was in the till.

Stern's prose is clear, precise and informative. It makes for an exciting and quick read not only for attorneys, but for those who are unfamiliar with the legal world. Learn how investigations, indictments, grand juries, trial preparation and the trials and appeals work from the inside as told by a professional deeply involved in investigating and uprooting the political corruption and mafia criminality that was the daily diet of NJ citizens for 60 years.

It is also a story of the steadfast dedication of one prosecutor and his team representing the people of the United States in protecting them from the evils of corrupt politicians, low-life mob and complicit corporations.

Although this book recounts Stern's experiences in the 1960's and 1970's, ending when he is elevated to the federal judiciary, the opinions he expresses about the way our legal system deals with gambling, free speech, obscenity, drugs and capital punishment is as relevant today as ever.
Read more
8 people found this helpful
Report abuse

Just Joe
5.0 out of 5 stars A Winner. A "real piece of work."
Reviewed in the United States on 1 June 2018
Verified Purchase
Not particularly appealing cover and title--but the insides build and build, get better and better, more and more captivating, and the work turns out to be a major piece of a young DDA's developing smalltime corruption cases into major tearing down of an entire state's mob-government-corruption complex.
Read more
One person found this helpful
Report abuse

Puzzle Addict
4.0 out of 5 stars Good story but did get a little bogged down in legal details.
Reviewed in the United States on 26 June 2019
Verified Purchase
Since I am from the West coast and was not at all familiar with this history it was interesting and a little frightening; hopefully, this level of corruption no longer exists?? This book may be of the most interest to those who are from the New York, New Jersey area and/or are from the legal community.
Read more
One person found this helpful
Report abuse
See all reviews
Back to top
Get to Know Us
Make Money with Us
Let Us Help You
And don't forget:
© 1996-2021, Amazon.com, Inc. or its affiliates