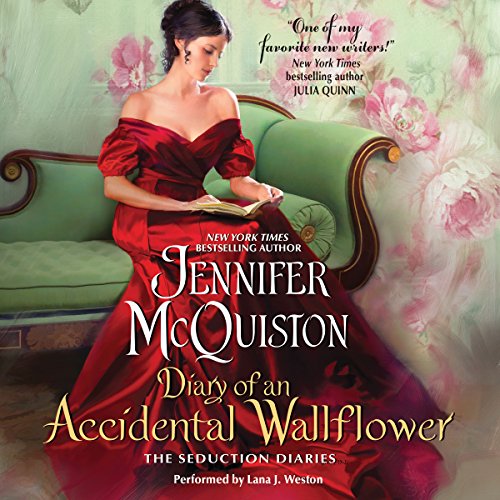 Diary of an Accidental Wallflower: The Seduction Diaries

4.3 out of 5 stars
4.3 out of 5
106 global ratings
How are ratings calculated?
To calculate the overall star rating and percentage breakdown by star, we don’t use a simple average. Instead, our system considers things like how recent a review is and if the reviewer bought the item on Amazon. It also analyses reviews to verify trustworthiness.

Gigi
2.0 out of 5 stars Good premise
Reviewed in the United States on 4 February 2018
Verified Purchase
I love class differences trope and I adore the fact that the hero wasn't titled but ultimately this book didn't work for me. I found the pacing to be way off. When I'm almost 60 percent into a book and nothing has happened to move the plot forward, there's no character growth, and there's zero chemistry between the leads then that means that everything will happen all at once in the last few chapters. This qualifies it as a slow burn, I suppose but I need something to sustain my interest. Clare spent the first half of the book obsessing over appearances, her status in society and trying to get the attention of a certain gentleman who is not the hero. Very little time was devoted to the developing relationship between her and Daniel. Too much time was devoted to seconds characters like Clare's siblings, although I guess they're probably going to be getting their own books, and most irritating of all there are several scenes with Daniel's horny landlady that ultimately served to do exactly nothing for the story. I liked the writing and I appreciated the authors research into medical procedures of the era. I just wish less time has been spent in the characters head and more time devoted to developing the romance.
Read more
5 people found this helpful
Report abuse

Maureen
4.0 out of 5 stars Diary of an Accidental Wallflower
Reviewed in the United States on 16 December 2016
Verified Purchase
I love reading historical romance novels, especially those set in 19th century England. I have been following Jennifer McQuiston on Facebook, but I have not had the opportunity to read very many of her books. I did enjoy reading The Spinster’s Guide to Scandalous Behavior, so I was excited about reading the first book in the series: Diary of an Accidental Wallflower.

Clare Westmore is poised to take her position as one of the “it girls” (my words, not McQuiston’s) of the London Season, when disaster strikes. Clare twists her ankle, but she insists upon hiding her injury and attending a party and finds herself sitting on the sidelines- with the wallflowers. She attempts to hide her twisted ankle, but her awkward gait attracts the attention of Dr. Daniel Meriel, the personal physician of the party’s hostess.

Daniel comes from a completely different world than Clare. He lives in a crime-ridden neighborhood and he spends most of his time working in a charity hospital. Daniel also conducts experiments; he is trying to perfect an anesthesia regulator. When he first encounters Clare, he thinks that she is vain and foolish for putting a party above recuperation. But as he gets to know her, he finds that she is intelligent and insightful, and he doesn’t understand why she pretends to vapid.

Their relationship develops slowly, and Clare feels confused as she begins to question her goals and expectations. There is also some turmoil in the Westmore home, so Daniel’s visits are a welcome reprieve from the tension. However, as Clare begins to wonder if the man she hoped would propose is right for her, the decision is inadvertently made for her. It’s mostly a moot point because she has already decided that she loves Daniel, but it would have been nice for Clare to actively choose Daniel over the heir to a dukedom.

I would recommend Diary of an Accidental Wallflower. I especially enjoyed Clare’s younger siblings, both of whom are featured in subsequent books. I appreciated the glimpse at the lifestyle of more average citizens, and not just the upper echelons of Society. I am looking forward to reading more of McQuiston’s books.
Read more
3 people found this helpful
Report abuse

TallGlassOfQuirky
5.0 out of 5 stars Love!!!!
Reviewed in the United States on 30 August 2015
Verified Purchase
I love Jennifer McQuiston. She has a wonderful voice, writes complex, likeable characters, and creates wonderful stories that fit into the historical romance genre without falling into the common tropes (like marriage of convenience, enemies to lovers, reforming rakes, etc) that most books in the genre do (even though those are still enjoyable when in the right hands). In this book, pairing a beautiful high society debutante with a poor but brilliant doctor seems bizarre, but it is handled beautifully. The characters develop genuine respect and admiration for one another, wrestle with the very real challenge of their different social standings, but fall in love and overcome the obstacles in a wonderful way. I love that the heroine's family played such a big role because love does not just impact the two people pairing up, their friends and families are still a part of their lives and that's important. The hero is also a genuinely GOOD person and I really appreciate that. No reformation was necessary, just learning how to love another and find a way to make a life with them.
Read more
3 people found this helpful
Report abuse
See all reviews
Back to top
Get to Know Us
Make Money with Us
Let Us Help You
And don't forget:
© 1996-2021, Amazon.com, Inc. or its affiliates