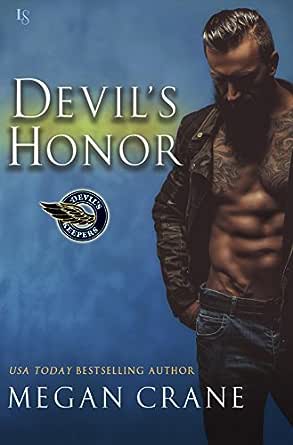 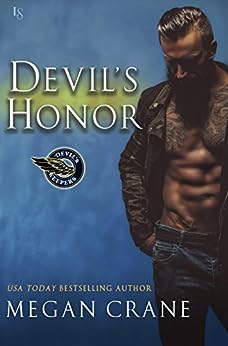 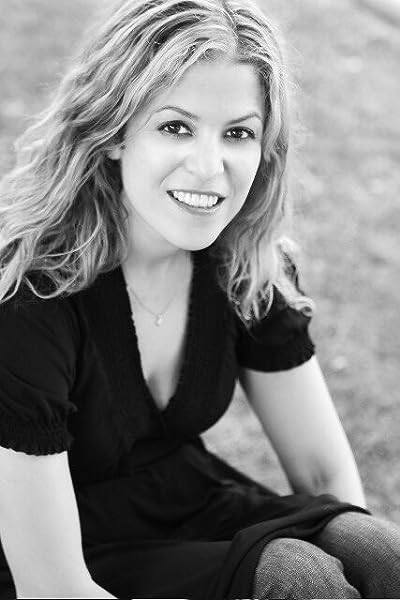 Kindle Customer
5.0 out of 5 stars Oh my (fans self)
Reviewed in Australia on 28 May 2017
Verified Purchase
This is one hot, sexy read. Greeley and Merritt are just soo perfect for each other, they challenge each other and give each other what they need. Loved Laine - the wild child voice of reason.
Read more
Helpful
Report abuse

Aussie Reader
TOP 1000 REVIEWER
4.0 out of 5 stars Did Merritt return, not to hide, but to be found & saved by Greeley just for the very reason that he cared enough to protect her
Reviewed in Australia on 2 November 2016
Devil's Honor (The Devil's Keepers #1) by Megan Crane is my first experience with this author and it did take me a while to settle in with her writing style but by halfway, she had me hooked, especially with the main character, Greeley, SAA for the Devil's Keepers MC. He's a layered character - dedicated to his club and his brothers, taking his role very seriously, but at the same time, unbeknownst to his brothers, reading college books in his free time, to extend himself. He spends a long hot summer bedding Merritt, the daughter of the only doctor for miles around. The Doc works for the MC but his precious daughter is kept away from such going on. He sends her far away to school but between College & Law-school she hooks up with Greeley, only to learn that the attraction on his part is far deeper than she will contemplate & when he asks her to be his, she runs. Five years later, she's running again - right back home from a twisted relationship with a senior partner at the law firm in New York. Her tiny town, deep in Louisiana, doesn't allow someone much chance of hiding & Greeley knows she's back that same night, just as she knew he would & she is worried. Their parting 5 years ago was not on good terms; he had told her if she returned he would either kill her or keep her. Quite a threat! And while she wants to deny him, she is just as overwhelmed by his Alpha as she was all that long ago. In fact, I am certain she returned, not to hide, but to be found and saved by Greeley just for the very reason that he cared enough to protect her.
There is much unsaid in this book and I found myself thinking of more & more questions as it proceeded. Greeley was by far the more dominant character, in my mind; Merritt seemed more a precocious child than an educated & successful women. The back story of the MC and the members we met was well fleshed out and I am keen to read the two other planned books (I've already pre-ordered them) so Megan Crane has done her job in drawing me into this MC. I hope there's more of Greeley in the forthcoming books; Merritt, not so much. If you are already a Megan Crane fan, you will definitely want to read this book, just as you will as a fan of the MC trope. If you are new to Crane, I urge you to pick up a copy of Devil's Honor and expend your reading to this established author who can create such fine characters as you will find here.

I received an ARC in exchange for an honest review.
Reviewed for Once Upon an Alpha.
Read more
One person found this helpful
Helpful
Report abuse

The characters were a little undeveloped.

I found Merrit a bit of a whiner. And I though Greeley was a bit of a mystery there was a hint of his character with some alpha male thrown in.

The sexy scenes are quite spicy and there are more than enough to keep your interest.

I thought the whole MC genre was a bit of a cop out as there was no original take on it.

All up I feel like the story was incomplete on a level that I needed more in the development of the characters and the story was left with too many questions, that I assume will be continued on in the series. I dont feel that I will continue on with the series.
Read more
Helpful
Report abuse

Shelagh
TOP 500 REVIEWER
4.0 out of 5 stars A cmpellng story
Reviewed in Australia on 20 November 2016
Megan Cane has a way of hooking her readers from the very first page and with Devil's Honour she certainly succeeds. Set deep in the steamy, sweaty heart of the Louisiana Bayou, this story oozes sex and sultriness from the fist page to the last. Megan Crane does an excellent job of paralleling the sultry heat of America's deep south with the relationship between Merritt and Greeley. Perfect setting, perfect pace and a story that matches the heat and sweat and downright dirtiness of the climate in the deep south combined with the thrill of danger associated with bad boy bikers makes Devil's Honour a compelling and page turning read.
Read more
Helpful
Report abuse
See all reviews

Kindle Customer
3.0 out of 5 stars Liked it but
Reviewed in the United Kingdom on 30 July 2017
Verified Purchase
Really liked the book but felt it could explore the mc side more and the book finished at 87 percent
Read more
Report abuse

Donna
5.0 out of 5 stars Love me some bayou heat!
Reviewed in the United States on 7 June 2019
Verified Purchase
This is my first read of an MC romance and holler if you couldn't put the book down. Holler!!! The writing packs a punch and flows easily, dialogue is natural and the descriptive scenes make it easy for the reader to imagine being right in the action. Well-developed characters. The heat level is hot and sweaty. And then there is the 'thick bayou night', every sexy inch of Joseph 'Greeley' Shaw welcoming Merritt Broussard home after five years. Have mercy the man is the definition of 'sex on two legs'. I like Merritt and I understood her angst but like her bestie Lanie Latour, you just want to shake some sense into the girl. Lanie is hilarious, 'I went to welcome her home and I accidentally got my stripper germs all over her . . ."
Read more
Report abuse

Nadine Bookaholic [Nadine's Obsessed with Books]
4.0 out of 5 stars good start to a new MC Series
Reviewed in the United States on 18 January 2017
Verified Purchase
I have to start by saying that I am a big fan of Motorcycle Club books, especially when they are part of the bad boy / good girl trope which this one is and it's also a Second Chance at Love story.

Merritt and Greeley had a summer fling before she left for law school several years earlier, the prologue fills us in on their hot and steamy but short lived romance. Greeley was pissed when Merritt left and told her never to come back to Lagrange again. She listened to him because she knew he was hurt when she told him she was leaving, but now her father has died and she is using that excuse to return hoping that no one will bother her while she is settling her fathers affairs. but that isn't the real reason she is hiding out in her childhood home...nope not the reason at all.

Greeley was your typical bad boy / outlaw / motorcycle club member, he was seriously bad news all around especially since he held the title of sergeant-at-arms Devil's Keeper MC. Gone was the person Merritt knew years ago and in his place was a hard, dangerous man, one she didn't know anything about.

Merritt and Greeley worked well together, she was soft where he was hard, she was compliant where he was strong-willed, and she was naive where he was worldly. I also enjoyed the give and take between the two of them.

This was a good start to the series, I look forward to reading more about the men of the Devil's Keepers MC, Killian "Uptown" Chenier's story is up next and I have a feeling that this pretty boy is hiding a lot of secrets.
Read more
One person found this helpful
Report abuse

Lisa M.
5.0 out of 5 stars LOVE IT.
Reviewed in the United States on 10 April 2018
Verified Purchase
TW: DV? Heroine was in an abusive relationship. Attempted assault.

Reading this makes me sentimental for the good old days when I first forayed into the adult romance genre and all I consumed was MC romance. I loved Megan Crane's post-apocalyptic romance series (and gushed about it on the blog), so when I saw this book on sale and featured a biker hero, I immediately one-clicked.

Greeley kinda reminds me of Tyr (The Edge book 1 hero) and I love him and his rough ways. I love how he didn't want to want Merritt, especially after how their affair ended in the past, but he also couldn't stay away from her. Their chemistry is so intense! I was completely engrossed in the scenes whenever they were together.

Kindle Customer
3.0 out of 5 stars I'm going with 3 stars
Reviewed in the United States on 8 November 2016
Verified Purchase
Well I didn't like Merritt, so wishy washy, she never stopped pushing away from Greenly until the very last and even thou she was 27 and a lawyer she came across as a high schooler...Now I liked Greenly alright and I really liked her Edge Series and I think alot of readers will love this, didn't hate it but if you don't like one of the M/C that's kinda rough
Read more
One person found this helpful
Report abuse
See all reviews
Back to top
Get to Know Us
Make Money with Us
Let Us Help You
And don't forget:
© 1996-2021, Amazon.com, Inc. or its affiliates