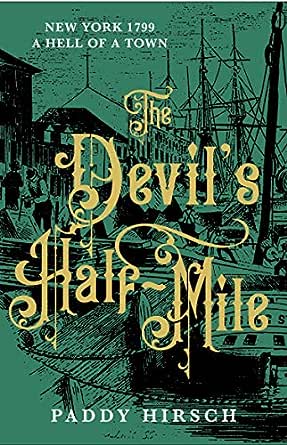 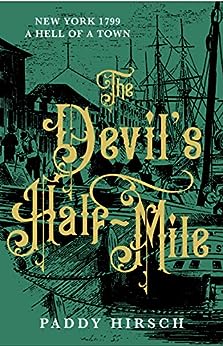 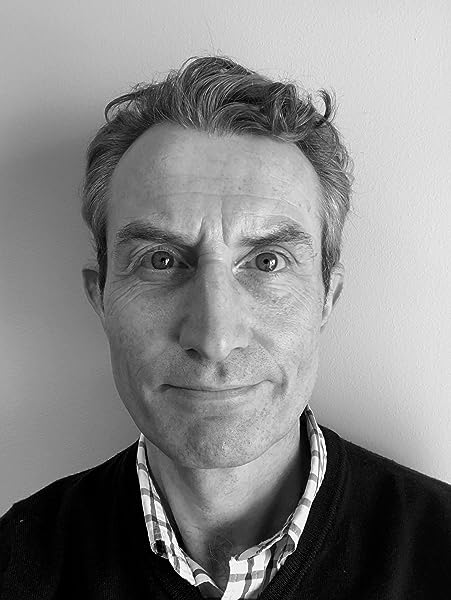 A page-turning historical thriller... A perfect holiday read. * Irish Independent * Fascinating and well drawn. * The Times * A tense, violent and atmospheric crime thriller set in 1799 when the white-collar criminals carried switchblades and human lives were traded like sacks of grain. * Michael Robotham, award-winning author of LIFE OR DEATH * The Devil's Half-Mile terrified me. Paddy Hirsch's vivid story of New York in 1799 shows just how vulnerable our newborn nation was to greedy men with no moral centers. Young Irish-American Justice Flanagan manages to expose the corruption of Wall Street and misdeeds of government officials but it's a close thing. Impossible not to think of parallels to today and hope there are some contemporary Justice Flanagans at work. Powerful. * Mary Pat Kelly, filmmaker and best-selling author of Galway Bay and Of Irish Blood * A meticulously researched historical thriller... with strong, multifaceted [characters] and tight plotting. I will impatiently await the sequel. -- Patrick Taylor --This text refers to the hardcover edition.

Paddy Hirsch was expansively (and expensively) educated in Dublin and Belfast. Had he managed to get in Trinity College, all might have been different, but instead he took a place at the University of Warwick, where he played rugby and founded the University's Irish Society. He started his journalism career in Hong Kong after a short stint in the military, and spent the next few years working in news in East and Southeast Asia, and Eastern Europe. From there to America, where he covered various aspects of Wall Street's carry-on for a variety of American and European news outlets. He lives in Los Angeles now, but makes frequent trips back across the Atlantic to fill up on good stout and proper bacon. And to see family, of course. --This text refers to the hardcover edition.

3.9 out of 5 stars
3.9 out of 5
29 global ratings
How are ratings calculated?
To calculate the overall star rating and percentage breakdown by star, we don’t use a simple average. Instead, our system considers things like how recent a review is and if the reviewer bought the item on Amazon. It also analyses reviews to verify trustworthiness.

Sue
5.0 out of 5 stars Cracking historical thriller set in New York, 1799
Reviewed in the United Kingdom on 21 May 2019
Verified Purchase
The year is 1799 and New York is a growing town that is busting at the seams.
Irish gangs rule the waterfront and the seedy sides of town, but the black gangs are starting to make their presence felt, especially with the growth of the Manumission movement.

Meanwhile, the nobs are trying to establish New York as the financial powerhouse of America, especially around Wall Street - the Devil's Half Mile.
Seven years ago, there was a financial crisis that nearly brought everything crashing down, but the country is now recovered, thanks to the intervention of eminient characters like Alexander Hamilton. Things are going well for the traders, but there is a certain amount of unease due to the trading regulations that are being drawn up, in order to ensure that another crash can be avoided.

Justice Flanagan, a young lawyer, has returned to New York, after studying the law back in Ireland. Justice's studies have been supplemented by studying the ways of the fledgling police force in Paris, which has given him some expertise in the methods employed to kill and the new study of forensics. His killing skills have also been honed by a sideline in scouting for the Irish Rebels during the Rebellion, while he was a student.
Justice's time as an erstwhile soldier has left its mark and may have affected him more than he realises.

Newly returned, Justice is on a mission to find out the circumstances behind the death of his father, around the time of the crisis. His father's death was made to look like suicide, but Justice believes that he was in fact murdered - a belief that has been confirmed by the specialist training he has received. He intends to find out why his father was killed and who was behind this.

Justice's return has also reunited him with some old friends - his comrade Lars, who fought with him during the Rebellion and is now a sailor; and with the grown-up Kerry O'Toole who he remembers fondly as a young girl full of promise, but who is deeply scarred by her experiences during Justice's absence.

As Justice undertakes his investigations, he exposes a massive fraud, which could topple the financial world all over again. He must fight his way through the web of secrets and lies, corruption and cover-ups, in the murky worlds of finance and slavery in order to uncover the shocking truth. It is not easy to walk the line between criminality and respectability.

I read book two in the Lawless New York series, Hudson's Kill, back in March, and was absolutely bowled over by it. The writing, the story and the characters were so enjoyable, that I practically read the whole book in one sitting.

Having enjoyed Hudson's Kill so much,I was very keen to go back and read The Devil's Half Mile to fill in all the back stories of my new favourite characters. I have not been disappointed.

There is a different flavour to this book than book two, as the story is much more personal to Justy and it is more difficult for him to be controlled in his actions. This is compounded by his recent experiences during The Irish Rebellion - some of the things Justy has seen, and been forced to do, have deeply affected him. Justy does not want to become part of the criminal world, despite his family ties, so he must learn to find a way to live with himself.
Fortunately, Justy has some good friends to help him on his journey, especially the trusty Lars. Along the way, Kerry can also begin her recovery too.

The financial details about the early days of Wall Street are very interesting, and the plot goes along at a good pace. The threads come together nicely and everything ends up well set up for Hudson's Kill, which begins four years after the events of The Devil's Half Mile.
This is a thoroughly enjoyable book, and I am very glad you chose to write this, Paddy Hirsch, rather than the history of the 1792 crash you originally planned!

The Devil's Half Mile is out now in paperback, and Hudson's Kill will be released on 4th July 2019. Both books get 5 stars from me!

P.S. Can Kristofer Hivju play Lars if this ever gets to the screen please????

Amazon Customer
5.0 out of 5 stars Really good yarn, lightly spiced with a little history
Reviewed in the United Kingdom on 13 September 2018
Verified Purchase
I heard Paddy Hirsch on the radio talking about this book and decided to investigate - I'm delighted I did..
It's a great story with interesting characters, some curious nuggets of New York and Irish history, and a good murder mystery at it's heart.
I'd happily recommend it and would read another Just Flanagan story if Hirsch produced one..
Read more
Report abuse

Matt Merritt
5.0 out of 5 stars A thoroughly enjoyable historical thriller
Reviewed in the United Kingdom on 27 December 2019
Verified Purchase
Paddy Hirsch has created a living, breathing New York filled with larger than life characters who keep you flipping pages long after you should have put the book down and started doing something productive.
Read more
Report abuse

K. Love
5.0 out of 5 stars Solid, twisty crime fiction set in Hamilton's NYC
Reviewed in the United States on 14 June 2018
Verified Purchase
I don't tend to gravitate to historical fiction, but I loved this book! Racism, xenophobia, and financial shenanigans... but for the horse drawn carriages, it could have been written today. Among the strongest selling points of The Devil's Half Mile: page turning mystery, fascinating characters, authentic Irish and period colloquialisms, and a twisty plot. The lead character, Justice Flanagan, is very engaging and has the sort of appeal that screams series. The rapport between Justy and his best friend, Lars, is so easy and delightful and I looked forward to their every interaction. Fingers crossed that Paddy Hirsch is as prolific as he is talented. Highly recommend.
Read more
11 people found this helpful
Report abuse

TRexDaddy
4.0 out of 5 stars Not a bad start
Reviewed in the United States on 11 May 2019
Verified Purchase
For a book that started out as pure history, this first Justy Flanagan mystery set at the turn of the 19th century in New York is an interesting take on a rough time in post colonial America. The writing shows promise, though Paddy needs to keep working his metaphors and not be so repetitive. Doesn't hurt the story. He could also have ended this book three different times, satisfactorily setting up the next book in the series, but kept plowing through open threads to close them. It will be interesting to see what happens next.
Read more
Report abuse
See all reviews
Get FREE delivery with Amazon Prime
Prime members enjoy FREE Delivery and exclusive access to movies, TV shows, music, Kindle e-books, Twitch Prime, and more.
> Get Started
Back to top
Get to Know Us
Make Money with Us
Let Us Help You
And don't forget:
© 1996-2020, Amazon.com, Inc. or its affiliates