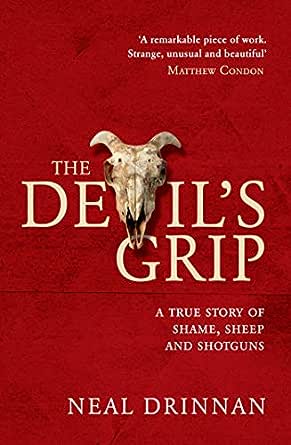 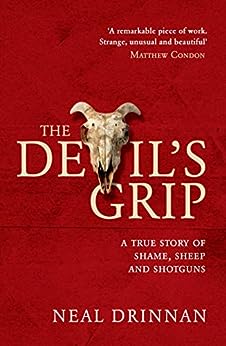 The Devil's Grip: A true story of shame, sheep and shotguns Kindle Edition

Seven shots ring out in the silence of Victoria’s rolling Barrabool Hills. As the final recoil echoes through the paddocks, a revered sheep-breeding dynasty comes to a bloody and inglorious end.

Almost three decades later, the web of secrets and lies that led to this bizarre and seemingly motiveless murder spree are unravelled with the help of Bob Perry, Darcy Wettenhall’s secret lover for a decade prior to his murder.

From the bucolic majesty, privilege and snobbery of the Western District’s prized pastoral lands and dynasties to the bleak, loveless underworld of orphanages, rodeo stables and homeless shelters, The Devil’s Grip is a courageous and thought-provoking meditation on the fragility of reputation, the folly of deception and the power of shame.

Praise for The Devil’s Grip

‘A remarkable piece of work. It is a strange, unusual and beautiful book with an incredibly unique setting. I don't think I've read anything quite like it. It is compulsive reading. True crime. Memoir. History. How do you live a life honestly and with dignity? It's difficult to categorise because it traverses so many genres. But it WORKS.’  Matthew Condon, author of the Three Crooked Kings trilogy

‘On its face this is the story of a family steeped in the pursuit of the perfect ram, but beneath the surface lies a riveting and ribald tale of lust, loss, manipulation, unbridled ambition and ultimately murder.’  Mark Tedeschi AM QC and author of Eugenia, Kidnapped and Murder at Myall Creek

‘An unforgettable, courageous and deeply tragic local story which manages to become a universal tale’  Gregory Day, author of Archipelago of Souls and A Sand Archive

‘It’s got it all: sex, domestic violence, ‘the land’ – such an important concept resonating in the Australian mind – land-holders and property, privilege, prejudice, skulduggery and murder!’  David Bradford, author of The Gunners’ Doctor and Tell Me I’m Okay

Neal Drinnan was born in Melbourne, Australia, sometime in the 1960s. At seventeen he abandoned caution and family life for the lure of life's more ephemeral things. He has worked in publishing and journalism for many years. He is the author of four novels, Glove Puppet, Pussy's Bow, Quill and the LAMDA award winning Izzy & Eve, as well as The Rough Guide to Gay and Lesbian Australia.

Mollysheepdog
5.0 out of 5 stars Ceres, a quiet town no more
Reviewed in Australia on 12 September 2019
Format: Kindle EditionVerified Purchase
I enjoyed this book because I knew several of the people depicted. It happened on the outskirts of Geelong, which is where I lived. I found out about the Wettenhall family and what a vile man Darcy was. How could the courts give custody to him, over his mother. Guy would probably be alive today if Jan had custody
Read more
One person found this helpful
Helpful
Comment Report abuse

Geoff Barby
5.0 out of 5 stars A gripping commentary on underground lives
Reviewed in Australia on 23 March 2020
Format: Kindle EditionVerified Purchase
Neal's friendship with one the books main characters and his own experiences combine to make this book a great read. Centered around a macabre event, the swirling world of gay life kept suppressed surfaced in a horrific way. The insight into another world is both sobering and challenging, urging us to accept what was only recently illegal. Such a great read and anyone from Geelong, you will know some of these characters. Excellent read Mr Drinnan.
Read more
Helpful
Comment Report abuse

Tam Kruger
5.0 out of 5 stars Fascinating piece of modern Australian rural history
Reviewed in Australia on 19 September 2019
Format: Kindle EditionVerified Purchase
Fascinating account of tragic rural murders, but so much more. Neal gives depth to the people involved in the tragedy. Additionally though, he gives us insight into how historically gay men have survived in the conservative, rural Australian communities, yet also a glimpse of how gay men survey their urban landscapes - a wonderful, enlightening read. Well done Neal, and Bob!
Read more
One person found this helpful
Helpful
Comment Report abuse

G Williams
5.0 out of 5 stars Outstanding
Reviewed in Australia on 26 October 2019
Format: Kindle EditionVerified Purchase
An outstanding and memorable book focused on both issues and the true crime in the Geelong area.
Read more
Helpful
Comment Report abuse

Nettsfix
5.0 out of 5 stars What a read - couldn’t put it down
Reviewed in Australia on 21 September 2019
Format: Kindle EditionVerified Purchase
Based on a true event the author captured an extraordinary account of the happenings - Amazing sensitive writing - thank you
Read more
Helpful
Comment Report abuse

MICHAEL PALMER
3.0 out of 5 stars Strange sex
Reviewed in Australia on 4 December 2019
Format: PaperbackVerified Purchase
Too much on sexual side
Read more
Helpful
Comment Report abuse
See all reviews from Australia
Get FREE delivery with Amazon Prime
Prime members enjoy FREE Delivery and exclusive access to movies, TV shows, music, Kindle e-books, Twitch Prime, and more.
> Get Started
Back to top
Get to Know Us
Make Money with Us
Let Us Help You
And don't forget:
© 1996-2020, Amazon.com, Inc. or its affiliates