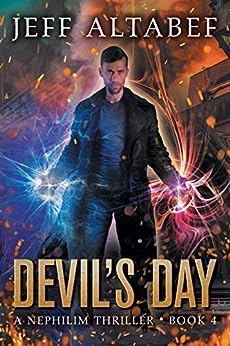 Steven Cabbott is running out of time to prevent the End of Days.

In an unfortunate twist of fate, Steven Cabbott is the bloody Anti-Christ, and everyone wants to take him down: light and dark angels, Magics, and a particularly annoying sheriff. It’s really pissing him off, but he’s outgunned in this fight, so he turns to the Fates, whose help won’t come cheap.

Steven’s father tells him he has a plan that might just stop the end of the world—if Steven is strong enough to complete it. Steven would like to trust him, but... well, he is the Devil. Best devise a plan of his own, just in case.

If you like Jim Butcher, Steve McHugh, Michael Anderle, Nazri Noor, Shayne Silvers, Shannon Mayer, or K.F. Breene, you won't be able to put down the “A Nephilim Thriller” series.

EVOLVED PUBLISHING PRESENTS an intriguing, thrilling look inside a great battle between good and evil, possibly leading to the End of Days, with the fourth book in the multiple award-winning “A Nephilim Thriller” series. [DRM-Free]

“Fast-paced and action-packed, Devil’s Day is an absolutely brilliant novel that will keep you on the edge of your seat and wanting more. To say I loved this book is an understatement!” ~ Readers’ Favorite Book Reviews, Rabia Tanveer (5 STARS)

“Devil’s Day is, for me, the best in this series and that’s saying something. ... Another roller coaster ride, directed by Jeff Altabef, starring some of the most memorable characters you’ll ever meet, in situations that will boggle your mind.” ~ Readers’ Favorite Book Reviews, Lex Allen (5 STARS)

EDITOR: Lane Diamond has over 160 published books to his editing credit, including many multiple award-winners, across many genres and styles.

EDITOR: Kimberly Goebel loves reading. Books have always been a part of her environment and her life. She taught English Literature for many years and her favorite part was watching students find their voice in writing. She edited at Weekly Reader for about a year prior to taking time off to have children. They are now writing their own stories, and reading as many books as their mama! She manages an independent bookstore in Chappaqua, New York called Scattered Books, which is her second home. She travels often with her family, and friends, and always makes sure to find the bookstores wherever they go. --This text refers to the paperback edition.

Jeff Altabef lives in New York with his wife, two daughters, and Charlie the dog. He spends time volunteering at the writing center in the local community college. After years of being accused of "telling stories," he thought he would make it official. He writes in both the thriller and young adult genres. Fourteenth Colony, a political thriller, was his debut novel. Shatter Point, a thriller, published by Evolved Publishing was his second novel. It won the Pinnacle Book Achievement Award for Best Thriller, Fall 2014.

Jeff's first Young Adult novel, Wind Catcher: A Chosen Novel, is being published on March 23rd by Evolved Publishing. He's very happy and proud that his co-author is his teenaged daughter, Erynn Altabef. Wind Catcher has won the 2015 Readers' Favorite Gold Medal for Coming of Age Novels, the 2015 Beverly Hills Book Award for Best YA Fiction and a Mom's Choice Award.

As an avid Knicks fan, Jeff is prone to long periods of melancholy during hoops season. Jeff has a column on The Examiner focused on writing and a blog designed to encourage writing by those who like telling stories.

LIR
5.0 out of 5 stars Exciting and Enjoyable
Reviewed in the United States on 15 September 2020
Verified Purchase
An extremely enjoyable adventure. This volume of the series moves more into the realm of magic, and introduces new characters to challenge Steven. I loved accurate portrayal of the the New York setting, as well as the interplay between good and bad. The good characters are not all good, and the bad ones are not all bad. Makes in less predictable and more enjoyable. Overall, an excellent and enjoyable book.
Read more
Report abuse

Kindle Customer
5.0 out of 5 stars Excellent Tale
Reviewed in the United States on 20 October 2020
Verified Purchase
An excellent tale of possibilities, second chances and the power of love. Action, twisty story, and a keen look at the possibilities of redemption, and changing a lifes path in unexpected ways. I really enjoyed this book in the series best so far!
Read more
Report abuse
See all reviews
Back to top
Get to Know Us
Make Money with Us
Let Us Help You
And don't forget:
© 1996-2021, Amazon.com, Inc. or its affiliates