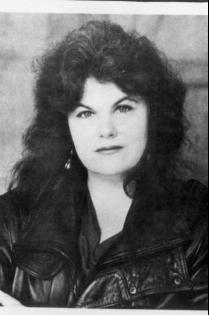 by Sharyn McCrumb (Author), Luke Daniels (Narrator)
4.2 out of 5 stars 111 ratings
See all formats and editions
Sorry, there was a problem loading this page. Try again.

I am an award-winning Southern writer. I am probably best known for my

Appalachian "Ballad" novels, set in the North Carolina/Tennessee mountains. These books include New York Times Best Sellers She Walks These Hills and The Rosewood Casket, which deal with the issue of the vanishing wilderness, and The Ballad of Frankie Silver, the story of the first woman hanged for murder in the state of North Carolina; The Songcatcher, a genealogy in music; and Ghost Riders, an account of the Civil War in the Appalachians.

My newest novel St. Dale, the Canterbury Tales set in NASCAR, was published by Kensington Books of New York in 2005, and is currently a nominee for the Library of Virginia Literary Award in Fiction and a finalist for its People's Choice Award.

Honors include: the 2003 Award for Literature given by the

I was the first writer-in-residence at King College in Tennessee. In 2001 I

served as fiction writer-in-residence at the WICE Conference in Paris, and

celebration at Emory and Henry College. (And I was the first Southern writer to take along a NASCAR driver to that literary seminar. Thank you, Ward Burton!)

4.2 out of 5 stars
4.2 out of 5
111 global ratings
How are ratings calculated?
To calculate the overall star rating and percentage breakdown by star, we don’t use a simple average. Instead, our system considers things like how recent a review is and if the reviewer bought the item on Amazon. It also analyses reviews to verify trustworthiness.

elizabeth smith
5.0 out of 5 stars Devil in the Details
Reviewed in the United States on 7 July 2011
Verified Purchase
I thoroughly enjoyed this book in which "Sight" is the underlying theme. Of course there is the "Second Sight" of Nora and the Bonesteel family. Their sight contrasts with the lack of interest the Big City reporters have in seeing or coming to know anything about the place where the murder occurred, the community which surrounded it, or the character of the people involved in the crime. Henry Jernigan was once a young man who sought to learn about places and people, but life has drained his interest and replaced it with preconceptions and preoccupations that cloud his vision. The irony is that though the Bonesteels can see, they cannot change what is to be; while the Big City reporters, who do not care to see, control the media and thus shape the outcome. That's the devil of it.
Read more
4 people found this helpful
Report abuse

Sallie Bailey
4.0 out of 5 stars Some Things Never Change
Reviewed in the United States on 28 November 2013
Verified Purchase
This book is also about an actual event but the author imagines virtually all the events surrounding the 1920's trial of a woman of the Tennessee mountains who was charged with the murder of her father. The plot deals mainly with the big city reporters - and one lad representing a local paper - who covered the trial. The ways in which they manipulate the facts to fit a preconceived idea of what the public wants and what will induce them to follow events avidly are really the main story. Reading, one can't help reflecting that nothing has changed since the Spanish American War to the present day. Readers are ruthlessly manipulated - and to hell with the truth.
Read more
2 people found this helpful
Report abuse

R. Gray
5.0 out of 5 stars Excellent author
Reviewed in the United States on 19 December 2011
Verified Purchase
I bought this book as a requested gift for my sister. We are from Appalachia so enjoy this author's books. McCrumb speaks of familiar mountains, people, and relatives, present and gone. The author is humorous and yet insightful into the people and traditions of this region, so often misrepresented. In this book, particularly, she has a message that apparently was lost among some reviewers. The main message is not the trial or any "mystery" but how journalists represented the trial, the locale, and it's people; a message quite applicable to present day media.
Read more
Report abuse

TCH2RD2
5.0 out of 5 stars Impossible to put down...
Reviewed in the United States on 16 June 2017
Verified Purchase
Nora Bonesteel is one of my favorite literary characters and Sharyn McCrumb is one of my favorite authors. The characters each told a story that was sad, genuine, and fascinating. As soon as I started reading it I had me in it's grip until I reach d the last page. Loved loved loved it!
Read more
Report abuse

Patty Duke
5.0 out of 5 stars A great work of historical fiction
Reviewed in the United States on 26 September 2017
Verified Purchase
Sharon McCrumb weaves many stories into this novel, and brings to life eras long past, so that you feel you lived them. Her characters become close family by the end of the book, and you end up with a whole new perspective on a time that happened before you were born. I wish history text books did such a great job. Loved this one, too!
Read more
Report abuse
See all reviews
Back to top
Get to Know Us
Make Money with Us
Let Us Help You
And don't forget:
© 1996-2021, Amazon.com, Inc. or its affiliates