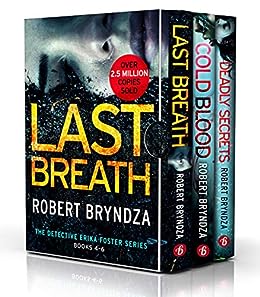 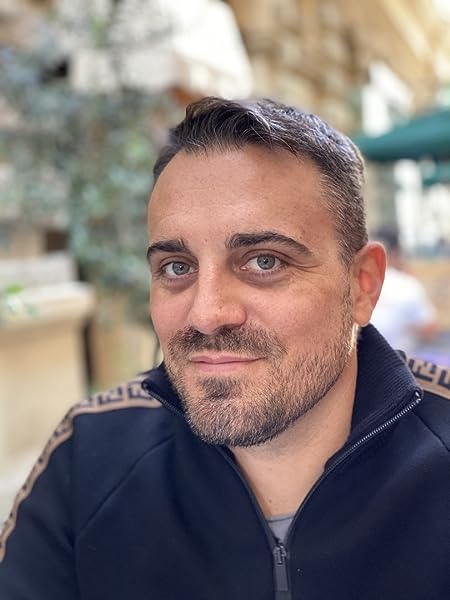 Last Breath: He’s your perfect date. You’re his next victim.

When the tortured body of a young woman is found in a dumpster, her eyes swollen shut and her clothes soaked with blood, Detective Erika Foster is one of the first at the crime scene. She quickly finds a link to the unsolved murder of a woman four months earlier. Dumped in a similar location, both women have identical wounds – a fatal incision to their femoral artery.

Stalking his victims online, the killer is preying on young pretty women using a fake identity. How will Erika catch a murderer who doesn’t seem to exist?

Then another girl is abducted while waiting for a date. Erika and her team must get to her before she becomes another dead victim, and, come face to face with a terrifyingly sadistic individual.

Cold Blood: A gripping serial killer thriller that will take your breath away.

When a battered suitcase containing the dismembered body of a young man washes up on the shore of the river Thames, Detective Erika Foster is shocked. Two weeks earlier, the body of a young woman was found dumped in an identical suitcase. What connects the two victims? As Erika and her team set to work, they quickly realise they are on the trail of a serial killer who has already made their next move.

Yet just as Erika starts to make headway with the investigation, she is the target of a violent attack. Forced to recover at home, and with her personal life falling apart, everything is stacked against her, but nothing will stop Erika.

As the body count rises, the case takes an even more twisted turn when the twin daughters of Erika’s colleague, Commander Marsh, are suddenly put in terrible jeopardy. The stakes are higher than ever before, but can Erika save the lives of two innocent children before it’s too late? She’s running out of time and about to make a disturbing discovery… there’s more than one killer.

On an icy morning, a mother wakes to find her daughter’s blood-soaked body frozen to the road. Who would carry out such a killing on the victim’s doorstep?

Straight off her last harrowing case, Detective Erika Fosteris feeling fragile but determined to lead the investigation. As she sets to work, she finds reports of assaults in the same quiet South London suburb where the woman was killed. One chilling detail links them to the murder victim – they were all attacked by a figure in black wearing a gas mask.

Erika is on the hunt for a killer with a terrifying calling card. Yet just as Erika begins to piece the clues together, she is forced to confront painful memories of her past. Erika must dig deep, stay focused and find the killer. Only this time, one of her own is in terrible danger…

Read what everyone is saying about the Detective Erika Foster series:

‘[Last Breath] is the sort of book that you want to devour in one sitting, it's too good to put down. The characters crackle with energy and the chemistry between them is fantastic to read… A breath-taking addition to the series that I would thoroughly recommend!’ The Quiet Knitter

‘Unputdownable... I couldn't read it fast enough and stayed up way too late... [Cold Blood ]is the best thriller I have read in ages and I've read some good ones... this is as good as it gets, and for me it was brilliant. I loved it.’ Goodreads Reviewer, 5 stars

‘[Deadly Secrets] is another amazing story with lots of twists and turns you don’t see coming. Cannot wait for the next one.’ Trish’s Blog
Read more
Previous page
Next page

Robert Bryndza is an international bestselling author, best known for his page-turning crime and thriller novels, which have sold over five million copies.

His crime debut, The Girl in the Ice was released in February 2016, introducing Detective Chief Inspector Erika Foster. Within five months it sold one million copies, reaching number one in the Amazon UK, USA and Australian charts. To date, The Girl in the Ice has sold over 1.5 million copies in the English language and has been sold into translation in 29 countries. It was nominated for the Goodreads Choice Award for Mystery & Thriller (2016), the Grand prix des lectrices de Elle in France (2018), and it won two reader voted awards, The Thrillzone Awards best debut thriller in The Netherlands (2018) and The Dead Good Papercut Award for best page turner at the Harrogate Crime Festival (2016).

Robert has released a further five novels in the Erika Foster series, The Night Stalker, Dark Water, Last Breath, Cold Blood and Deadly Secrets, all of which have been global bestsellers, and in 2017 Last Breath was a Goodreads Choice Award nominee for Mystery and Thriller. Fatal Witness, the seventh Erika Foster novel, is now available to pre-order and will be published 7th July 2022.

Most recently, Robert created a new crime thriller series based around the central character Kate Marshall, a police officer turned private detective. The first book, Nine Elms, was an Amazon USA #1 bestseller and an Amazon UK top five bestseller, and the series has been sold into translation in 18 countries. The second book in the series is the global bestselling, Shadow Sands and the third book, Darkness Falls, has just been published.

Robert was born in Lowestoft, on the east coast of England. He studied at Aberystwyth University, and the Guildford School of Acting, and was an actor for several years, but didn’t find success until he took a play he’d written to the Edinburgh Festival. This led to the decision to change career and start writing. He self-published a bestselling series of romantic comedy novels, before switching to writing crime. Robert lives with his husband in Slovakia, and is lucky enough to write full-time.

You can find out more about Robert and his books at www.robertbryndza.com

4.6 out of 5 stars
4.6 out of 5
230 global ratings
How are ratings calculated?
To calculate the overall star rating and percentage breakdown by star, we don’t use a simple average. Instead, our system considers things like how recent a review is and if the reviewer bought the item on Amazon. It also analyses reviews to verify trustworthiness.

Julie
5.0 out of 5 stars A genre converter
Reviewed in Australia on 1 May 2020
Verified Purchase
These books have lured me away from the usual genre I read. So great to have a mature, imperfect but strong lead character in a series. I really enjoy the complex storylines; you can't quite guess the endings as there's always a twist.
Read more
One person found this helpful
Helpful
Report abuse

TyndaFlat
5.0 out of 5 stars Excellent
Reviewed in Australia on 20 April 2022
Verified Purchase
Bryndza is definitely in the realm of top authors in the crime and serial killer genre's. Brilliantly written, all of the characters are very real
Read more
Helpful
Report abuse
See all reviews

Mr Wilson
3.0 out of 5 stars Average thrillers
Reviewed in the United Kingdom on 3 October 2020
Verified Purchase
This conyinues the series.
The stories were gripping enough but some situations got a bit forced and she has a past that makes her socially awkward but I didn't think it added anything to the story.
How she gets involved in the cases isn't smooth and didn't add to the stories.

J GOODALL
5.0 out of 5 stars Always a twist in the story
Reviewed in the United Kingdom on 20 July 2020
Verified Purchase
I absolutely love these books, I can relate to the Erika character she things how I think. Always brilliant story lines
Read more
Report abuse

granniean
5.0 out of 5 stars Granniean
Reviewed in the United Kingdom on 12 December 2021
Verified Purchase
I wish there were more stars available to score. Have enjoyed all of the 6 books I have read . Will certainly be keeping them on Kindle.December 2021
Read more
Report abuse

kim
5.0 out of 5 stars Loved it
Reviewed in the United Kingdom on 20 June 2022
Verified Purchase
Real page turner and what a surprise ending that was. Cannot wait for more. Highly recommended loved it. Good read
Read more
Report abuse