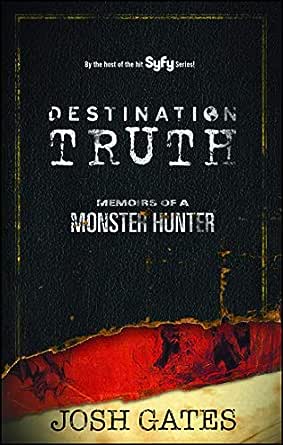 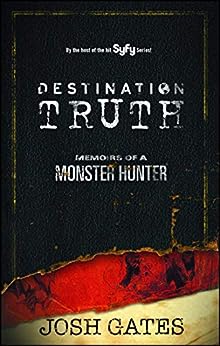 Truth is stranger than legend . . . and your journey into both begins here.

Follow Gates from the inception of the groundbreaking hit show (at the summit of Kilimanjaro) to his hair-raising encounters with dangerous creatures in the most treacherous locations on earth. Among his many adventures, he unearths the flesh-crawling reality of the Mongolian Death Worm, challenges an ancient curse by spending the night in King Tut’s tomb, descends into a centuries-old mine to search for an alien entity in subterranean darkness, pursues ghosts in the radioactive shadow of Chernobyl, and explores sightings of Bigfoot from the leech-infested rain forests of Malaysia to the dizzying heights of the Himalayas.

Part journey into the unexplained, part hilarious travelogue, part fascinating look at the making of a reality-based TV show—and featuring never-before-published photographs— this Destination Truth companion takes readers on the supernatural expedition of a lifetime.
click to open popover

Jodie Morgan
5.0 out of 5 stars I thoroughly enjoyed this book
3 August 2014
Format: Kindle EditionVerified Purchase
As a fan of the T.V. show, I thoroughly enjoyed this book. The drama, comedy and action kept me on the edge of my seat. I enjoy every aspect of this book from the travelling to the hunt for monsters. Josh Gates is a wonderful writer, and I hope he writes more books. I highly recommend this book.
Read more
Helpful
Comment Report abuse
See all 1 customer reviews
Write a customer review

Kindle Customer
5.0 out of 5 stars Wow !! I want to be an Adventurer
21 January 2018 - Published on Amazon.com
Format: Kindle EditionVerified Purchase
I loved every page of this exciting book BECAUSE: I don't think Josh used a ghost writer, as the intonation and cadence of the speech sounds just like he does on his program, Destination Truth.
The next reason I devoured the book so avidly included the fact that Josh Gates is well-educated, and that is obvious in his writing style, grammar and vocabulary. It's VERY refreshing for me to have to stop mid-page in order to look up a word definition.
This book is loaded with historical facts plus anecdotes as well, and since Josh received his university degrees in archaeology and drama, these little tidbits of truth and cultural oral tradition round out this book with candid photos of the crew and their exotic locales.
I sincerely hope that the next 4 seasons of Destination Truth will give Josh Gates plenty of hair-raising unexplainable truths and worldwide adventure for The Next Book #2. I can't wait !!
PS: I bought this book by mistake, having thought it was "Free", under Kindle Unlimited... After reading a few chapters I simply Could Not stop reading to return it and get my money returned. Now i am glad that I decided to keep this funny, informative, exciting, kinda spooky, absolutely interesting, best book I've read in several months. (and I'm an habitual, voracious reader)🤓
Read more
11 people found this helpful

Just An Opinion
5.0 out of 5 stars Exceeds Expectations
28 November 2016 - Published on Amazon.com
Verified Purchase
Just like Josh Gates the TV host, Josh Gates the author is clever, funny. likable, and engaging. The book reads much like the dialogue on his current show. The unlikely story of how he sort of stumbled into his lucrative and enviable career as a travel/adventure guru is quite fascinating. Turns out, Gates was both very lucky AND very good, which is usually a potent combination for success.

You definitely get a sense of how much work and time go into putting a television show together. Gates is an exceptional writer who excels at painting pictures with words and making you feel that you are in the moment with him.
Read more
10 people found this helpful

Nicole B.
5.0 out of 5 stars Not What I Expected - But In The Best Way
12 August 2014 - Published on Amazon.com
Verified Purchase
When I got this book, I was expecting a deeper look into the crazy paranormal/cryptozoological investigations Destination: Truth is known for. I was pleasantly surprised to be proven wrong! The book starts with a brief summary of how Josh ended up on Destination: Truth, and then spends the next 90% reminiscing about the places he's visited, the people he's met, and the things he's learned. The writing is very much in Josh's witty style, and I giggled out loud so many times that I was obliged to read the excerpts to my friends (who were stuck with me in a car on an 10-hour road trip. Perfect time to read a travel memoir!) But it's also poignant and surprisingly deep. My brother always describes Destination: Truth as "that travel show that happens to sometimes have monsters." I feel that is a fitting way to describe this book, too. If you want to read something that inspires you to see the world differently, that encourages that feeling of wanderlust, or just a quick and humorous read, this is the book for you.
Read more
15 people found this helpful

L.C.B.
5.0 out of 5 stars If the most interesting man in the world had a son....
3 May 2017 - Published on Amazon.com
Verified Purchase
Reading this for the second time! Gates has a way with words, I'm literally laughing out loud as he brings us along on his adventures. A rare combination of adventurer and author who can paint a scene to make you feel as if you're there (and at least for me at times be very glad I'm not!). Gates "gets it" his respect for local cultures, regular guy attitude and Indiana jones spirit make this a great read, and make him seem like the guy you want to find sitting next to you at the bar swapping stories with. Buy the book, you'll love it.
Read more
5 people found this helpful

pds
5.0 out of 5 stars Grab your hat and hold on...
3 January 2018 - Published on Amazon.com
Verified Purchase
I am a fan of Josh Gates and the shows he hosts. He is personable, funny and his narrative abilities could likely make a trip to the library sound death defying! This book will grab you from the first page and never let you go. I made the mistake of letting someone read the first chapter and my book vanished for two weeks! I have retrieved it and rather than dolling it out a chapter at a time to make the adventure last I finished it in one sitting. It’s a rollicking free for all behind the scenes accompaniment to the Destination Truth TV show. I can’t recommend this highly enough! One question for Mr. Gates, when can we expect another book?
Read more
3 people found this helpful
Go to Amazon.com to see all 345 reviews 4.8 out of 5 stars
Get FREE delivery with Amazon Prime
Prime members enjoy FREE Delivery and exclusive access to movies, TV shows, music, Kindle e-books, Twitch Prime, and more.
> Get Started
Back to top
Get to Know Us
Make Money with Us
Let Us Help You
And don't forget:
© 1996-2020, Amazon.com, Inc. or its affiliates