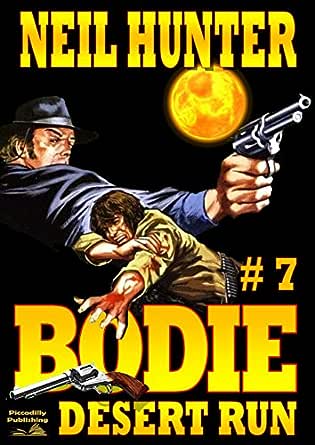 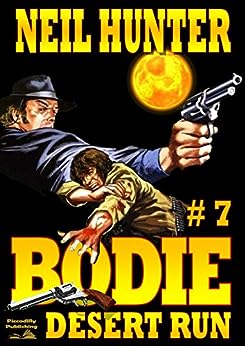 Bodie was trailing three men who’d escaped from Yuma Pen – three men he’d helped to put there in the first place. But when they shot his horse out from under him, he found himself set afoot in the searing desert.
If he was to turn the tables on the men now hunting him, he needs to reach the life-saving waters at Pinto Wells. But just when he figured he’s in the clear, he found another shock awaiting him.
A face from his past. An equally dedicated killer – thought to be dead – who’s tracked Bodie down and plans to exact his own vengeance.
Bodie figured he was safe after dealing with the escapees. But now he faces another challenge from the man called Silverbuck.
This time it’s a struggle to the death, with no quarter and only one will walk away from the desert run…

Kindle Customer
5.0 out of 5 stars THE ESCAPE
15 July 2016 - Published on Amazon.com
Verified Purchase
Bodie is at it again, this time it's escapees from the infamous Yuma Prison. Crooked prison guards and lawyers, missing gold all add up to a prison break. Lots of action and descriptive topography of Arizona. Bodie is a tough HOMBRE which is illustrated in his bounty hunting. The man is tough unafraid, he thinks like the bushwackers he hunts. Looking forward to his next adventure, he doesn't seem to expect much out of life except for a good horse and to come out alive after the hunt. And we shouldn't forget a nice hot bath, a delicious dinner when he can...such is the life a bounty hunter..SCARY..
Read more

Kindle Customer
4.0 out of 5 stars No fun in the desert
24 December 2015 - Published on Amazon.com
Verified Purchase
Brodie faced seemingly great odds of winning but as a survivor he won the challenge for water and the defeat of the bad guys. Not as exciting unless you like the cursing and killing.
Read more
One person found this helpful

jack w.
5.0 out of 5 stars Bodie. Desert run
10 December 2016 - Published on Amazon.com
Verified Purchase
As most of Neil Hnnters books it is very good
Read more

larrie
5.0 out of 5 stars Five Stars
24 January 2016 - Published on Amazon.com
Verified Purchase
Neil Hunter is a wonderful writer, and I love the Bodie stories!
Read more
Go to Amazon.com to see all 4 reviews 4.7 out of 5 stars
Get FREE delivery with Amazon Prime
Prime members enjoy FREE Delivery and exclusive access to movies, TV shows, music, Kindle e-books, Twitch Prime, and more.
> Get Started
Back to top
Get to Know Us
Make Money with Us
Let Us Help You
And don't forget:
© 1996-2020, Amazon.com, Inc. or its affiliates