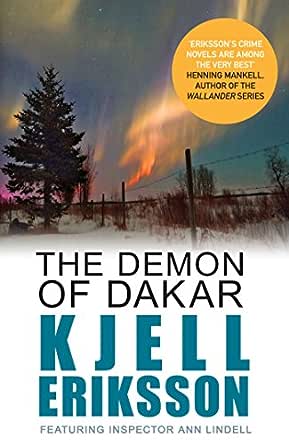 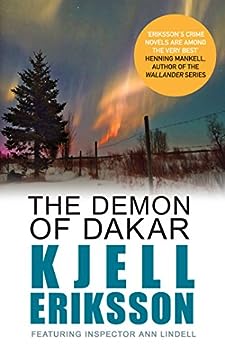 'Eriksson's crime novels are among the very best' Henning Mankell, author of the Wallander series

Uppsala, Sweden. A naked man is unearthed from a river with a lacerated neck and the only clue to his identity is the remains of a tattoo that has been sliced off his arm. When a local drugs deal goes awry and another man is hospitalised with a similar wound, Inspector Ann Lindell and her team are called in to investigate. All clues lead back to the local Dakar restaurant, run by the gluttonous Slobodan Andersson.

As Lindell delves deeper and is drawn into a dangerous maze of kidnap, blackmail, drug smuggling and betrayal, she must face a race against time to catch the killer.

geoffrey hancox
4.0 out of 5 stars The Demon of Daker - I like this one
17 November 2013 - Published on Amazon.com
Verified Purchase
The Demon of Dakar is an excellent read, the description of the characters, their traits and faults and the locations in which the story is set is very well thought out by the author. Its interesting to see a Mexican element brought into the Swedish setting which provides an international flavour to the story. The character of Inspector Ann Lindell is a complex one, having to deal with personal problems, tension within her team and the danger of police work. Kjell Eriksson is a brilliant writer of the crime thriller genre and the Demon of Dakar is one of his best.
Read more

Christopher O'Connor
1.0 out of 5 stars In one word - boring
11 October 2014 - Published on Amazon.com
Verified Purchase
People have praised this book but I found it tedious, long winded and frankly half way through gave up. It may have a superb ending but an author has to keep you there, not allow you to drift off and wonder what other book you could be reading. Fortunately Jo Nesbo and The Son were able to take over - now there is an author who knows how to hold you.
Read more

sagitaur
5.0 out of 5 stars Kjell Eriksson does it again.
7 November 2013 - Published on Amazon.com
Verified Purchase
Kjell Eriksson does it again. In a subtle and seductive way he draws you into the story, the characters, and before you know it you're up half the night unable to stop turning the pages. Waiting impatiently for the next book from this author.
Read more

S.K.Eng
5.0 out of 5 stars The paper back book arrived in good condition.
25 October 2014 - Published on Amazon.com
Verified Purchase
The paper back book arrived in good condition.
Read more
Go to Amazon.com to see all 6 reviews 3.9 out of 5 stars
Get FREE delivery with Amazon Prime
Prime members enjoy FREE Delivery and exclusive access to movies, TV shows, music, Kindle e-books, Twitch Prime, and more.
> Get Started
Back to top
Get to Know Us
Make Money with Us
Let Us Help You
And don't forget:
© 1996-2020, Amazon.com, Inc. or its affiliates