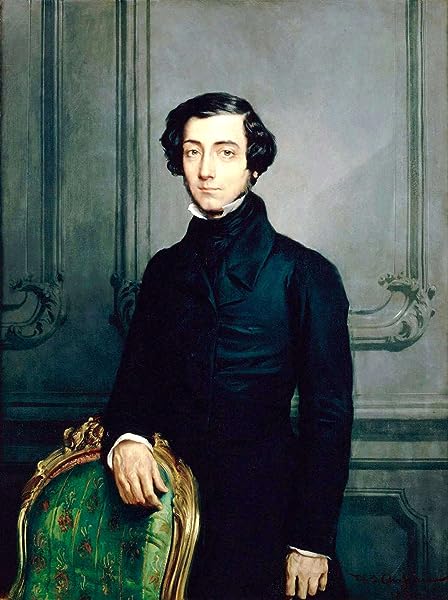 Page 1 of 1 Start overPage 1 of 1
Previous page
Next page
Start reading Democracy in America on your Kindle in under a minute.

''[T]he best edition of the best book on America. . . . What we need, here at the beginning of the century, is a fresh examination--one that begins from Tocqueville's own concerns and not from our desire to use him for our political battles. Mansfield and Winthrop . . . have contributed immeasurably to that task by providing hundreds of notes identifying events, allusions, and names that are no longer familiar, and by providing an accurate and readable translation of Democracy in America, one far superior to the old editions.''--Daniel J. Mahoney, Weekly Standard''The editors have written more than a mere introduction; they have written in fact a small book, a remarkably comprehensive and yet succinct study of Tocqueville's political thought. . . . Mansfield and Winthrop have made a remarkably comprehensive and tightly argued case for Tocqueville as the greatest political theorist of democracy, a theorist who is just as relevant today as he was in the nineteenth century.''--Gordon S. Wood, New York Review of Books''It would be difficult to think of a greater service to the study of Tocqueville than the one performed by Mansfield and Winthrop in their impeccable new edition and translation of Democracy in America. . . . The publisher is justified in claiming that this version will henceforth be seen as the 'authoritative' edition in English.''--Choice ''The Mansfield-Winthrop work will henceforth be the preferred English version of Democracy in America not only because of the superior translation and critical apparatus, but also because of its long and masterly introductory essay, itself an important contribution to the literature on Tocqueville.''-Roger Kimball, The New Criterion ''If Tocqueville is an indispensable guide to understanding the American experience, Harvey C. Mansfield and Delba Winthrop are indispensable guides to Tocqueville himself. In the introduction to their fresh and limpid translation of Democracy in America--what will surely be the definitive translation for some time to come--they offer a helpful summary of Tocqueville's philosophical and political thought.''--Thomas Pavel, Wall Street Journal''Democracy in America will continue to be read with profit as long as the United States survives as a republic and, indeed, as long as democracy endures. It deserves faithful translators, careful expositors and insightful commentators. In Mansfield and Winthrop it has found them.''--Robert P. George, Times Literary Supplement''[A] major new translation. . . . Tocqueville's insights confirm his brilliance and remind us that many features of national character are virtually indestructible.''-Robert J. Samuelson, Newsweek''This will be the English translation of Tocqueville for a long time, and it has the additional bonus that the introduction is as succinct an introduction to Tocqueville, or at least to the conservative view of him and his achievement, as one can find.''--Adam Gopnik, The New Yorker

Alexis de Tocqueville (1805-59) came to America in 1831 to see what a great republic was like. What struck him most was the country's equality of conditions, its democracy. The book he wrote on his return to France, Democracy in America, is both the best ever written on democracy and the best ever written on America. It remains the most often quoted book about the United States, not only because it has something to interest and please everyone, but also because it has something to teach everyone. Harvey Mansfield and Delba Winthrop's new translation of Democracy in America is only the third since the original two-volume work was published in 1835 and 1840. It is a spectacular achievement, capturing the elegance, subtlety, and profundity of Tocqueville's original. Mansfield and Winthrop have restored the nuances of his language, with the expressed goal to convey Tocqueville's thought as he held it rather than to restate it in comparable terms of today. The result is a translation with minimal interpretation, avoiding the problem that Tocqueville himself read in the first translation of Democracy in America. The strength of the translation is only one reason that Mansfield and Winthrop's Democracy in America will become the authoritative edition of the text. Also included is a superb and substantial introduction placing the work and its author in the broader context of the traditions of political philosophy and statesmanship. Together in one volume, the new translation, the introduction, and the translators' annotations of references no longer familiar to us combine to offer the most readable and faithful version of Tocqueville's masterpiece. As we approach the 160th anniversary of the publication of Democracy in
America, Mansfield and Winthrop have provided an additional reason to celebrate.
Lavishly prepared and produced, this long-awaited new translation will surely become the authoritative edition of Tocqueville's profound and prescient masterwork.

Harvey C. Mansfield is the William R. Kenan Jr. Professor of Government at Harvard University. He is the author of Machiavelli's Virtue and has translated The Prince, Discourses on Livy (with Nathan Tarcov), and Alexis de Tocqueville's Democracy in America (with Delba Winthrop), all published by the University of Chicago Press.
Read more

4.6 out of 5 stars
4.6 out of 5
408 global ratings
How are ratings calculated?
To calculate the overall star rating and percentage breakdown by star, we don’t use a simple average. Instead, our system considers things like how recent a review is and if the reviewer bought the item on Amazon. It also analyses reviews to verify trustworthiness.

Chris Welch
4.0 out of 5 stars Oops! Slight oversight there.
Reviewed in the United Kingdom on 23 November 2015
Verified Purchase
As the other reviewer pointed out the first line of the first book is missing. However, everything else seems to be in order.
Read more
Report abuse

C. Andev
4.0 out of 5 stars Four Stars
Reviewed in the United Kingdom on 7 December 2015
Verified Purchase
Loved it. Needed it for university.
Read more
Report abuse

Judith M. Kirscht
5.0 out of 5 stars A Book Every American Needs to Read
Reviewed in the United States on 3 April 2018
Verified Purchase
I’ve always been fascinated by America, the American experiment, the American experience. In college, I found my place in the sociology, anthropology, political science and literature of the American people, values and ideals. My novels are born of the culture of merging, conflicting cultures we, as Americans, were born into, from my conviction that dealing with that experience is the challenge of being American. Only once before, in 1968, have I had the horrifying sense that the country was coming apart under the strain, a sense of the great experiment disintegrating.
What has happened to us? Where did this disintegration into hate and violence, this contempt for our institutions begin and where is it taking us? From all of my early studies, the work that keeps coming to mind, as I look for answers is Alexis de Tocqueville’s Democracy in America. De Tocqueville was a French aristocrat who hated tyranny and feared that democracy would disintegrate into tyranny of the majority. He understood, however that democracy was the future, so in 1831 he came to America in order to see it in action. To my mind, no student should graduate from high school in the United States without reading his observations and reflections on the American people, for we desperately need to renew our sense of not only the hope but the challenges of being an American and a commitment to support its survival as a democracy.
De Tocqueville feared individualism and the abolition of the class system that, he believed, gave order and stability to the European nations. He believed that without that order, people would be forever anxious about where they belonged and would end up forever comparing themselves to each other. Forever insecure, their individualism would devolve into selfishness and each would end up alone. We should take a good look at ourselves in light of this fear. Has our insecurity, our need to know where we belong splintered us into rival groups where each gains stature by debunking the other?
However, De Tocqueville also found in the Americans, an equality unknown in Europe and with a deep sense of community and civil order. He found a people committed to building a new world, to resolving together the problems that confronted them. He believed that the multitude of civic organizations would counter the dangers of individualism. The men, he thought, would forever strive to power and acquisition of wealth, but the mores, the “habits of the heart” carried by the women, would provide the civilizing force.
He has a great deal to say about the role of religion in the New World and many other subjects, but this gives a taste of a perspective different enough to shake up the all-to-stale ideologies that have broken us into enemy camps. We have indeed joined civil action groups, but we have, since Trump’s election, discovered the importance of unwritten mores, that undergird our common culture. That gives us the opportunity to regain our sense of belonging to a whole.
His views on the role of women should spark lively conversations on individualism versus commitment for both genders as well as on the effect of the rampant greed of the eighties and nineties. De Tocqueville believed it is the “habits of the heart” that give the Americans strength. We need to rediscover those together.


Read more
85 people found this helpful
Report abuse
See all reviews
Back to top
Get to Know Us
Make Money with Us
Let Us Help You
And don't forget:
© 1996-2021, Amazon.com, Inc. or its affiliates