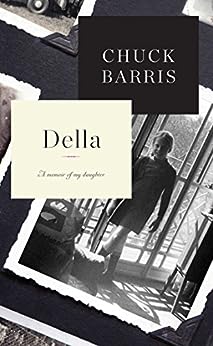 Della: A Memoir of My Daughter Kindle Edition

Chuck Barris is a former television show creator and producer, whose credits include The Dating Game, The Newlywed Game, The Gong Show, and Treasure Hunt. He is the author of several books, including Confessions of a Dangerous Mind (adapted into a major motion picture) and the New York Times bestselling novel You and Me, Babe. Chuck and his wife, Mary, live in Manhattan. --This text refers to an alternate kindle_edition edition.

Thinkhunni
5.0 out of 5 stars Beautifully written cautionary tale.
Reviewed in the United States on 13 January 2017
Verified Purchase
Bought while in Mexico for my birthday. Although tragic, it was the perfect beach read. I couldn't put it down! I remember Chuck Barris from the Gong Show when I was a little girl. I also remember Della introducing her dad on the show. Her story is unimaginably sad and seemingly preventable. Mr. Barris' sweet and detailed recollections of Della are heart wrenchingly beautiful. Yet, I struggled with my anger towards his neglect of her when she really needed him.
Read more
10 people found this helpful
Report abuse

Rhonda Poynter
3.0 out of 5 stars A heartfelt attempt to remember a lost child, but...
Reviewed in the United States on 28 September 2010
Verified Purchase
I personally know what drug abuse will do to a family. My brother, father and other family members died from drugs, and I will be the first one to state that no matter what you do as you try to save somebody trapped in this self-destructive brakeless car, nothing is enough, something isn't the right thing to try, something else would have been better to try. Having said that, I have extreme sympathy for Mr. Barris, as he puts down in words the destruction of his daughter Della, and her eventual death at the age of 36 to cocaine, alcohol, HIV symptoms, and, in my opinion, a lifetime of not enough care and too damned much money. Chuck Barris, of course, is the Godfather of American game shows, and he will be remembered for among others, The Gong Show, The Dating Game and The Newlywed Game. This guy saw reality tv forty years before everyone else, and there's no denying that he is a genius. But a good father - I lost count of how many times, in these pages, Mr. Barris describes Della Od'ing, being homeless from her habit, being beaten and abused by those around her, being arrested, all the usual things that go along with being a junkie, and these very harrowing recollections would end with Mr. Barris writing, "What could I do? I didn't know, so I did nothing." Wow. We know the man is brilliant, and we know he is a hard worker. We don't know as much about Della's mother, but both parents come off, throughout the book, to put it bluntly, as self-absorbed idiots. Barris is irritated he has to go to the hospital after his daughter has Od'd (at the age of fourteen) because it took him out of an industry shmoozefest; he makes it a point to mention that he shows up in his tuxedo. I don't know whether he was trying to relay how quickly he walked out to get to his daughter's side, but it comes across, on page, as This guy shouldn't have been anywhere but trying to figure out what in the hell was going on with his obviously desperately adrift child. The book hits sour notes here and there as we see what a petty man Mr. Barris can be; he seems to actually move from a home because he doesn't like his neighbors, and that's no exaggeration. Masybe we're not all like me - if somebody's on my nerves, I go and tell them to stay on the other side of the street, and that's that. Mr. Barris seems so wary of any sort of confrontation that you wonder how he became the legend he is in the entertainment field - maybe it was a case of having to be such a shark at work that there was nothing to give at home, I don't know. He insults Della more than once, suggesting that her behavior seems to be that of a 'retarded person'- his words, not mine, and ones I take offense to, having a mentally disabled son -, and he seems surprised that anyone would buy the paintings Della turns out in her later years to earn money, after she's blown through a million dollar trust fund. As his own shows prove, what is one man's treasure is another man's garbage, and he more than anyone should be intelligent and mature enough to recognize that there is always an audience for anything offered, even a drug-addicted troubled woman's paintings of pain and regret. It is very, very hard to feel compassion toward Mr. Barris - all that money, connections, etc. and he could do, according to him, NOTHING for his daughter? Uh-uh. One feels for him, but one feels much more for Della, who may have been born into money but not much else, if this memoir is accurate: She was given a million dollars and tossed out into the world, without common sense, guidance, even fair warning of what the real world could be like. Some people need watching over, taking care of, and it is clear to the complete stranger that this was Della; why did her parents not see this, or did they just not want to see? I do give Mr. Barris props for admitting, throughout the book, that he should have done something, but my god, did it really take his only child dying for him to realize that? If he knew this before Della was completely beyond his grasp, if he knew he could have done something before she was gone, well, I don't think that this book is going to help him sleep any better at night, at all.
Read more
23 people found this helpful
Report abuse

Michael Thomas Pazera
5.0 out of 5 stars I still think of you as a beautiful girl on the inside
Reviewed in the United States on 22 April 2017
Verified Purchase
Exactly a month ago Chuck Barris died. I learned that about a week ago when I was in the process of reading Della. I in fact ordered this just a day earlier than Mr. Barris passed away. A very interesting book, a very heartbreaking book. I remember watching the Gong Show in the 70's and thinking his daughter was such a lovely young lady (4 years older than me). Just cute as a bug's ear. I read the reviews of this awhile back, and I was interested but reading some of the details of her life...Wow, just Wow. The plastic surgery and all that, WHY??? And as much as it was hard reading about those 2 thugs that beat and robbed her, I kind of think that she reaped that after she had done similar to a girl in her school (especially after her forced and hollow apology). Rest in peace Della, I still think of you as a beautiful girl on the inside, even though you got dealt a bad hand. And Chuck, RIP as well. You brought alot of happiness to alot of people as well as making a beautiful daughter.
Read more
One person found this helpful
Report abuse

Lady Marie
5.0 out of 5 stars Book review on Della Barris
Reviewed in the United States on 21 June 2014
Verified Purchase
I personally knew her, she was one of my best friends. after my family moved us out of California to Hawaii
we lost touch.Not like these days with internet and Face Book. Boy wouldn't that of been great. I never knew she had such troubles, we always had a great time. She lived with her Mom and her Dad was always part of the fun.
I'm bummed and mad she fell with the drug crowd. Divorce sucks for kids.
The Book was a good read, I learned even more than she ever talked about. She didn't like much talking about her family.
We just always had a great time tons of Laughs. she had a car at 16 a CJ7 or 5 Jeep. she picked me up everyday for school.
we used to go up in the hills of Hollywood & Mulholland to go off roading, man did we have fun.
I Love You Della and I will always think of how you made my life so much better. xoxoxo
Read more
24 people found this helpful
Report abuse

John Richards
5.0 out of 5 stars Tremendously honest............
Reviewed in the United States on 19 June 2016
Verified Purchase
Tremendously honest book written by a father in memory of his daughter. I read it in two days, could not put it down. It is painful and real,
and refreshingly different because the author Chuck Barris, does not deny or avoid his responsibility in all that happened. If you are looking
for a happy upbeat fairy tale kind of book, this is not it. For those of you who prefer to deal with reality, this is great!.
Read more
Report abuse
See all reviews
Back to top
Get to Know Us
Make Money with Us
Let Us Help You
And don't forget:
© 1996-2021, Amazon.com, Inc. or its affiliates