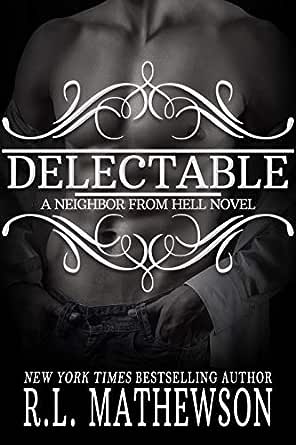 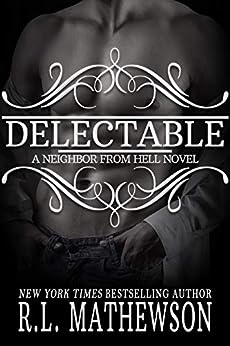 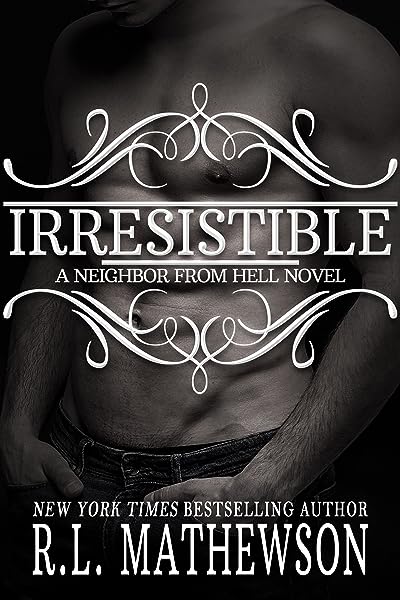 4.7 out of 5 stars
4.7 out of 5
493 global ratings
How are ratings calculated?
To calculate the overall star rating and percentage breakdown by star, we don’t use a simple average. Instead, our system considers things like how recent a review is and if the reviewer bought the item on Amazon. It also analyses reviews to verify trustworthiness.

megan
TOP 10 REVIEWER
5.0 out of 5 stars A FUNNY AND NICELY WRITTEN BOOK
Reviewed in Australia on 2 August 2017
Verified Purchase
Delectable, by R L Mathewson was a very good read in the NFH series - arguably the best so far?!
The book opened with a humiliating and public Dear John letter to Reece from his ex fiancé, Missy. Then, it went off in a quirky direction that involved the sanctioned ogling of Trevor and Jason Bradford (yes, their wives were ok with it) by Kasey, a neighbour, at their summer holiday beach retreat. Reese Bradford was ogled the most and labeled 'Yummy'.
Next, the storyline rolled forward to highlight relationship-phobic, single mum, Kasey and her 'messy' life. It seemed Kasey allowed herself to look, but not take it seriously. Poor Reece landed in the middle of it all with a baseball playing girl, a head injury, a food website, an old, rundown cottage and a major kitchen renovation.
Kasey was a survivor, strong, snarky and witty. Her daughter, Mikey was a hoot! Their characters were refreshingly different from what I was expecting. Reece was quiet, broody, sexy, principled and very appealing. He was really the sweetest Bradford of them all! Kasey wasn't Reece's 'type', but then he really noticed her...and then it was on! Their sex scenes were electric, their banter was exquisite and their crazy antics were caotic and hilarious. The Bradfords feature, of course, as well as Sara, Kasey's friend, Eric, her brother-in-law and Sebastian, Mikey's friend/Tevor's son.
My only criticism: the use of 'worrying of the bottom lip' and lusful 'lip-licking' were overused 😁.
However, overall, I loved the book! Delectable was a great break from the serious stuff in life and took me to a nice place of wonderful ridiculousness, giggles, belly-laughter, sadness, warmth, hotness and love. What a fun book!

Calkit
5.0 out of 5 stars It's a given ........
Reviewed in Australia on 5 August 2017
Verified Purchase
That this book deserves more than 5 stars. R.L. Mathewson, is an absolutely fantastic author. Her books and characters come to life. Believe me when I say you will lose track of time reading this book; the story has you captivated and rivet to you seat (in my case it was my bed, because I thought I would read a chapter or two before bed. But ended up staying up all night because I couldn't put it down).

purple_jellie
4.0 out of 5 stars Great Series; fine as stand alone read
Reviewed in Australia on 4 December 2018
Verified Purchase
Love the humour. I read some other reviews saying the 'formula' was getting old & predictable but I love this series, I loved the humour, I loved how the horrific events that cause the Bradfords to be banned from venues happens 'off screen' and we see the hilarious fall out or after effects. Much greater comedic impact that way.
Read more
Helpful
Comment Report abuse

Maria
TOP 1000 REVIEWER
5.0 out of 5 stars LOVED IT PEOPLE, EVERY SECOND OF THIS BOOK
Reviewed in Australia on 3 August 2017
Verified Purchase
What can I say other than, thank you R.L Mathewson it was so worth the wait.
Reece was nothing like his cousins, but OMG how sweet is he!
Kasey is most certainly a women worthy of this Bradford that's for sure, and isn't he a lucky bugger because this chick can cook...
Read more
Helpful
Comment Report abuse

Jo
5.0 out of 5 stars RL has done it again!
Reviewed in Australia on 5 August 2017
Verified Purchase
The Bradfords are my favorite family! Love this story between Reese 'yummy' and Kasey 'delectable'. RL never fails to deliver. Really looking forward to the next book in this series.
Read more
Helpful
Comment Report abuse

Amazon Customer
4.0 out of 5 stars Good fun
Reviewed in Australia on 1 August 2017
Verified Purchase
It doesn't disappoint. It's the same overbearing, hungry alpha male and a female that is just always a step ahead. Was a fun read with some ridiculous storylines.
I do love Mikey and I am dying to know what happens with her and Sebastian's friendship. It's adorable.
Read more
Helpful
Comment Report abuse

Reece was such a sweetheart tho he definitely had all the Bradford men traits I just found him so endearing and Kacey she was softer I felt than some of the more recent females that made me relate to her more and there love story was more Bradfordish.

A very enjoyable 4.5 star read for me and Aidan and Melanie better be up next or I'm gonna kick some ass !!!!
Read more
5 people found this helpful
Report abuse

Cookie Munchkin
5.0 out of 5 stars Fab Read.
Reviewed in the United Kingdom on 9 August 2018
Verified Purchase
Reece Bradford is so in need of a break after his ex-fiancée decided to write a letter humiliating him in the worst way and posting it in the internet and then running off and marrying his best friend in Vegas he just needs time away so ends up spending the summer in the beach house that he rented as a surprise for Missy. Now he’s spending the summer listening to his cousins each night and praying for sleep. When he meets his neighbour he finds a diversion in the form of Kasey and her daughter Mikey. It’s not long before Reece is firmly ensconced in both their lives and he knows he has found his love. Reece knows that she has to move slowly as Kasey hasn’t had the easiest time but she his and there is no way that he will ever let her go.

Kasey’s world begins and ends with her precious daughter and her two best friends Sara and Eric. After losing the love of her life at fifteen and finding herself widowed with a baby on the way life hasn’t been easy. Finally making something for herself she has her website and catering business she decides to self-renovate her kitchen which doesn’t go as planned. She’s rescued by the yummy man next door who suddenly decides to build her the kitchen of her dreams. And soon falls for the kind man that he is. There is no way that Reece is going to go away and let her fear of life push him away.

Reece is a little lost in the family of Bradford’s and has never followed his dreams always doing exactly what his twin does and now he is unsatisfied with his life, this is his time to shine and find his true path in life with a woman that will support him no matter what. Kasey’s sidekicks are hilarious you can’t help but laugh at all of these books. As always I cannot wait for the next book in this awesome series they are like comfort food for the soul which the Bradford’s will fully understand.
Read more
2 people found this helpful
Report abuse

KTH82
5.0 out of 5 stars Another Great NFH
Reviewed in the United Kingdom on 2 August 2017
Verified Purchase
Seriously can not get enough of these. Like all the other Bradfords yet nothing like them at all, I love Reese's individuality yet the character he is afraid of becoming. Making my heart ache from the start for sweet Kasey RL has written a worthy winner of Reece's heart so much so that I can't even steal him as my book boyfriend.
This book will have you turning the pages fast and unable to set down. Still having our favourite NFH showing their faces is always a plus. I did miss more about the big family meet up as such, but no doubt RL has one up her sleeve somewhere.
This will be read and re-read again like the rest of the NFH series. Well done RL it's a cracker!
Read more
3 people found this helpful
Report abuse

connie-lou
5.0 out of 5 stars My new favourite!
Reviewed in the United Kingdom on 3 September 2017
Verified Purchase
Every time I read a new book in this series I fall in love and tell myself that this book is my new favourite, but in all honesty delectable has definitely earned the top spot!
From start to finish I had a smile on my face, every Bradford and their crazy antics always without fail have me creasing up but Reece and Kasey were brilliant! I loved their attitudes and chemistry, I couldn't of pictured a better match for either of them.
I could read this book repeatedly and never get bored of it, thank you R. L Mathewson xx
I now can't wait to read Aidan's story 😬
Read more
2 people found this helpful
Report abuse

avid_reader
5.0 out of 5 stars Love it..love it..love it
Reviewed in the United Kingdom on 20 August 2017
Verified Purchase
I've read everyone of these books because they're so much fun to do. The story is real but the characters I want in my friends circle. There funny, honest, captivating and again so much fun to read about.

This story doesn't jump around, it just doesn't sit still over a small time frame, because they're believable and real like stories. I drop everything when I read these. I don't talk to anyone or stop to watch anything, because in the fews hours it takes to read it all, I want to escape to their world. And their world is not extraordinary or elaborate, it's just fun without any real damaging emotional triggers or reminders of our really bad world. And when you have a draining job, and busy home life, I want this and very happy to spend the money to go there.
Read more
4 people found this helpful
Report abuse
See all reviews
Get FREE delivery with Amazon Prime
Prime members enjoy FREE Delivery and exclusive access to movies, TV shows, music, Kindle e-books, Twitch Prime, and more.
> Get Started
Back to top
Get to Know Us
Make Money with Us
Let Us Help You
And don't forget:
© 1996-2020, Amazon.com, Inc. or its affiliates