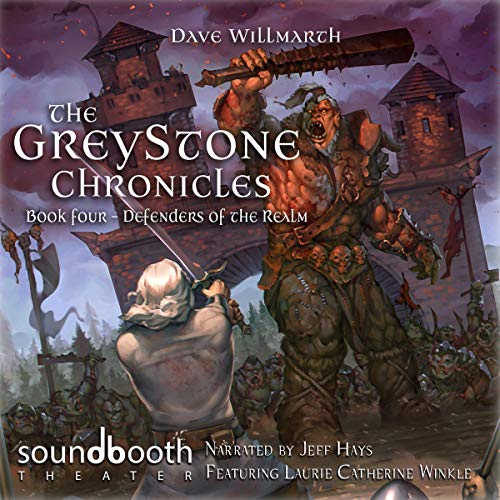 Defenders of the Realm: The Greystone Chronicles, Book 4

The kingdom is expanding! More land, more resources, and surprising new allies. Fibble gains some interesting stats, a new set of skills, and a patron deity of his own. Elysia is prospering.

But Alexander and his Elysians are forced to defend their lands against an invading orc horde from the north and the dark army of demons and undead that has escaped from the caverns where Alexander imprisoned them. At the same time, the Dark One is, somehow, still working with the drow wizards to subjugate more lands and expand their evil influence.

Join the Greystone Guild and their Elysians as they battle armies to defend their lands and their people. They fight for freedom and their very survival, facing a ruthless enemy bent on destroying the world. But is the cost too high for Alexander to endure?

4.8 out of 5 stars
4.8 out of 5
176 global ratings
How are ratings calculated?
To calculate the overall star rating and percentage breakdown by star, we don’t use a simple average. Instead, our system considers things like how recent a review is and if the reviewer bought the item on Amazon. It also analyses reviews to verify trustworthiness.

Scott Osmond
TOP 100 REVIEWER
4.0 out of 5 stars The Flip Side Of Power
Reviewed in Australia on 28 April 2022
Verified Purchase
Another good entry. In this one Alexander learns that the flip side of power is responsibility. It's a game world and although the players respawn the npc's don't. It reminds me of the saying, the boys throw stones in fun but the frogs die in ernist. With total immersion it would be difficult to believe that it's just a game. Several battles and it seems that the Dark Lord isn't dead and gone but is still around.
Read more
Helpful
Report abuse

Goof80
5.0 out of 5 stars Such fun
Reviewed in Australia on 4 March 2019
Verified Purchase
I am really enjoying this series if you are into gaming then give this a go as they are fun stories and well worth a read
Read more
Helpful
Report abuse

Heather Grogan
5.0 out of 5 stars Five Stars
Reviewed in Australia on 9 July 2018
Verified Purchase
Dave has expanded this series so much and he doesn't write fast enough.
Read more
Helpful
Report abuse

Jake Fitzsimons
5.0 out of 5 stars Trouble in Io
Reviewed in Australia on 10 April 2020
Verified Purchase
Alexander continues his empire building in the game and battles more mobs. There are lots of new discoveries and even some romance.
Read more
Helpful
Report abuse

Amazon Customer
TOP 500 REVIEWER
4.0 out of 5 stars Entertaining if a little melodramatic
Reviewed in Australia on 26 July 2018
The story roles on with no end in sight to the overall arc however it is entertaining and kept me reading. Minor inconsistencies between prior novels such as dropping stone golems. This is understandable as they were written as a bit overpowered.
Read more
Helpful
Report abuse

Gerbo
5.0 out of 5 stars Another good read
Reviewed in Australia on 13 July 2019
I’m really enjoying this series, the story keeps me entertained and wanting to read the next book. So onto book 5.
Read more
Helpful
Report abuse
See all reviews

Keri Death Wheatley
5.0 out of 5 stars Fun series
Reviewed in Canada on 28 December 2021
Verified Purchase
I am really enjoying this series. I am awaiting more shadow sun books please. 😂 This series has been enjoyable. I appreciate you not using the stupid stick as often as many other authors do. Thanks for the trip to fabulous new worlds.
Read more
Report abuse

J~
3.0 out of 5 stars not the best installment but still ok
Reviewed in the United States on 12 June 2018
Verified Purchase
I will start by saying that overall I like this series quite a bit, that being said, this installment was just ok. For the most part the writing and storytelling are up to par when compared to other installments and the world building side is actually better. So you may ask why only 3 stars? The answer is simple, protagonists that don't learn things and keep repeating the same dumb mistakes or that come up with fantastic ideas then do not implement them are frustrating. The worst part about this book is that Alexander spends most of his time doing both in this book.

I don't know what the author was going for in this one. The MC has been a bit of a "Mary Sue" character from the start but, if you have read this far into things it is something you can at the very least overlook, or, more likely something you enjoy. In this installment it is like the author goes out of his way to try and rub some of that "Mary Sue" shine off Alexander but then makes his tribulations pointless because they don't teach him anything or cost him anything. For example the first third of the book is spent with the author trying to create a feeling of angst because Alexander messes up his mana flow and cannot use his magic without being in tremendous pain. But it amounts to nothing because, Deus Ex Machina; literally in this case because he is transported away by the actual "gods" of the game and given divine magic to combat the ridiculous death worm spell and that is just that. No lesson, no discoveries, no new abilities learned to compensate for his magic that would serve to make him less one dimensional in battle, something that is by the way a bit of a staple for this particular plot device. Why spend so much of the book focused on something that is ultimately meaningless?

My other great annoyance with this book is that everytime Alexander learns something valuable like when Geb tells him to use his expendable resources like the stone golems in battle before commiting NPCs that will not respawn, he promptly doesn't use the lesson for the next battle. In fact he does not use the stone golems in the final battle with the demon army at all... they are not even mentioned. The author makes such a big deal over the idea that Alexander is starting to see this gaming reality more and more as real not a game and how it affects him deeply on an emotional level when the AI driven NPCs that can't respawn are killed because he makes poor choices. One would think that the "get out of jail free card" that the 10 nearly indestructible, ridiculously strong stone golems provide would be at least utilized to effect when perpetrating a battle in which one is out numbered at least 3:1. Nope, not our MC, he makes the same stupid mistake again. Even more egregious is the constant stream of ideas that would be really cool or seem like good ideas that either lead nowhere or are completely ignored in favor of something else with no explanation. The most frustrating example of this was Alexander's idea to open the demon army portal in a magma pool for the final battle. Sounds like a great way to stack the deck in his favor right? Wrong. And there is no explanation as to why it is not done, I mean I get that it would have made for an anticlimactic final battle to just have all of the demons wiped out by lava but, there should have at least been a dialogue sequence that made the use of a magma pool untenable.

It drives me nuts when an author messes with what I have come to expect out of his stories. If I wanted something different from what he has been doing I would read something else. These stories are feel good all's well that ends well stuff, it is one of my go to reads when I end up reading something that ends up depressing. All of the stupidity in this installment messes with that enough that it overshadows all of the things that are done well. I hope the next installment is back to form and is free from the painfully, obviously contrived scenarios that plague this one.
Read more
3 people found this helpful
Report abuse

Alucard
5.0 out of 5 stars Meh
Reviewed in the United States on 23 June 2018
Verified Purchase
Had a hard time putting the books down so they get a 5 star but dude wth. They have 10 stone gollems which can be destroyed without worry and they dont use them at all when facing an army or undead and then a second one of demons? Serriously how stupid are your characters. You even told them to make better use of their desposable assets after they only used 2 of the golems to fight the orcs. Really. And seriously they have portals why are they restricting themselves to the healers that are theirs? They could easily have a dozen priests or pallys from each city rez their fallen citizens after the battle. Or if they are really that secritive bring the dead through the portal and have player pallys rez them. Friggin noobs the whole lot of them.
Read more
2 people found this helpful
Report abuse

Jacob Goodrich
5.0 out of 5 stars Another masterpiece addition to the wonderful Greystone world
Reviewed in the United States on 29 May 2018
Verified Purchase
I picked this book up the minute it dropped because I've loved all the previous works by Dave so far and this one didnt disappoint at all.

The world building in this one was fantastic I love the take on watching how each character develops and grows. There isn't a low point in this book at all.

The focus of the book is trying to get everything rounded up and ready for the battles to come and it delivers with a vengeance. I loved the action in this story. I bought it and didnt stop reading until I was done. It was so well crafted that time seemed to flow by and I finished the story realizing it was 3 am. But ohhhhh... it was worth every second of sleep deprivation I had.

There is many adventures and harrowing escapes in this chapter of the story and you definitely want to see how and why. Alexander takes it to a whole different scope of things by working so hard in the story.

If you havent read the previous ones..... well you better because the story takes it to another level in this book. I gladly recommend reading this series without a thought. So go buy it and read it you will not be disappointed.
Read more
Report abuse
See all reviews