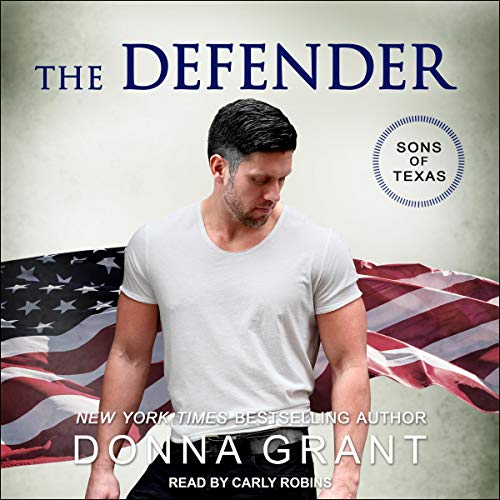 4.6 out of 5 stars
4.6 out of 5
122 global ratings
How are ratings calculated?
To calculate the overall star rating and percentage breakdown by star, we don’t use a simple average. Instead, our system considers things like how recent a review is and if the reviewer bought the item on Amazon. It also analyses reviews to verify trustworthiness.

JJ26
5.0 out of 5 stars Great read
Reviewed in Australia on 7 March 2021
Verified Purchase
Solid story that was hard to put down. Great characters and even though it was read as a stand alone, it was great to see characters from earlier in the series included.
Read more
Helpful
Report abuse

Book lover
5.0 out of 5 stars The Defender - Sons of Texas
Reviewed in Australia on 1 January 2021
Verified Purchase
What a great series, will read again
Read more
Helpful
Report abuse

jan55
5.0 out of 5 stars Would recommend this book
Reviewed in the United Kingdom on 15 June 2019
Verified Purchase
Not so easy reading as her other books, slightly heavy going in some places but I still enjoyed reading it & would definitely recommend it to others
Great author all her books are a must read
Read more
Report abuse

Nicola
5.0 out of 5 stars Brilliant read
Reviewed in the United Kingdom on 30 June 2019
Verified Purchase
The books just keep getting better and better. Can’t wait for the next instalment.
Read more
Report abuse

ZR1000
5.0 out of 5 stars Two alone against conspirator forces…
Reviewed in the United States on 9 July 2019
Verified Purchase
This is the fourth book in the Sons of Texas series.

Brigadier to a Russian mob boss living in the United States, Lev Ivanski, at the request of his Pakhan is sent to Kiev, Ukraine to foil an assassination attempt of the Saints, a secret global organization that has infected governmental agencies worldwide and that needs to be destroyed. He’s unsuccessful when he runs into a beautiful woman with the skills to thwart and kidnap him, not an easy feat, she’s also someone who can provide intelligence on the Saints and so his plans change.

A former CIA operative, one who’d gone rogue, Reyna Harris has been working for the Saints with one specific objective, retribution for the loss of her partner at their hands. It’s been five years undercover and she finally has information worth sharing but she blows her cover when she captures an unknown operative trying to stop a planned assassination that will be blamed on terrorists. There’s something about this man that made her change her plans and by doing so she placed a target on herself.

Can these two deadly strangers trust each other? An unsteady truce has them racing across European countries seeking an exit strategy that will allow them to return to the United States while they barely remain ahead of their hunters. Previously the Saints suffered the loss of Ragnarok, a nasty bioweapon, by the Loughman family and their allies, a small group of capable, connected, determined individuals that Lev is associated with. During the arduous journey these two basically loners make an emotional connection they never expected possible for themselves considering their personal histories.

This book was an exciting story, fast-paced with constant action and lots of suspense to rivet one’s attention. There were multiple points of view and a fascinating underlying storyline with a myriad of moving parts and some nasty twists are thrown in. The main protagonists were interesting and likable, intelligent and resourceful, the heightened danger helped build trust and let them get to know each other under the unique circumstances of fighting for their very survival, actions do speak louder than words. This was an enemies to lovers’ romance with in-depth characters having palpable chemistry.

I was happy to finally see another book in this series and I hope for one more for the character Maks, he’s an intriguing wildcard plotting future mayhem. The Saints remain in existence causing havoc for humanity under the guise of saving the species when they’re just out for an ultimate power base. The individuals at the head of this hydra-like conspiracy are as yet unidentified. With external and internal forces now working against them, will those who rebel against this mammoth organization finally succeed is the question and the needed resolution to this series.
Read more
One person found this helpful
Report abuse

📚Erin 📚
5.0 out of 5 stars Lev finally gets his story!!
Reviewed in the United States on 17 July 2019
Verified Purchase
This is the fourth installment of the Sons of Texas series. Although it can be read as a standalone I recommend reading all of the books in order.

I have been waiting for Lev’s story since he was first introduced in book 2. And I was not disappointed. Lev has always been a very intriguing mysterious character to me and Reyna was the perfect match for him. The chemistry between them never felt forced. Through the events of the book their relationship moved from enemies to companions to lovers.

It was also great to catch up with all of the other characters as well. It was nice to see their relationships continue to grow. One thing I love about these books is how each story pushes the plot forward. None of the time feels wasted.

Carly Robins does a good job with the narration. She might not be my favorite, however she is no where near the bottom of the list either. I can not wait until the next book.
Read more
One person found this helpful
Report abuse

WFTM (cntryrox)
5.0 out of 5 stars Lev and Reyna
Reviewed in the United States on 22 September 2020
Verified Purchase
Lev is the Brigadier in the Russian mafia. Sergi is his boss and a man he looks up to. They have joined some people in fighting the Saints, an organization determined to rule the world and terminate anyone against them. Lev is sent to Kiev to stop an assassination but gets caught instead. Reyna is former CIA and has been undercover in the Saints for five years. She is trying to bring them down after they killed her partner. Now she and Lev have to keep a step ahead of the Saints and get back to the States.
Great story, I was a little confused at first, so it’s best to read the books before this one. Constant pulse pounding action and suspense. Two loners who learn to trust and rely on each other.
Read more
Report abuse
See all reviews
Back to top
Get to Know Us
Make Money with Us
Let Us Help You
And don't forget:
© 1996-2021, Amazon.com, Inc. or its affiliates