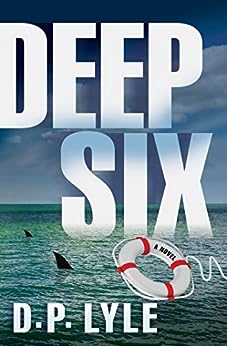 "D.P. Lyle returns in superb form in Deep Six. Smart, wickedly funny, expertly constructed and deftly executed, Lyle is at the top of his game as he takes his readers on a romp on the Gulf Coast that goes down as smoothly as a cold beer on a hot day at a bar next to the beach. Jake Longly is a character worth rooting for, and Lyle's fans will be cheering for an encore. Find a comfortable chair and plan to stay up late to enjoy the ride. Highly recommended. " -- Sheldon Siegel, New York Times best-selling Author of the Mike Daley/Rosie Fernandez novels

"Fans of D.P. Lyle's darker, more noirish work may suddenly feel like they're on the butt end of a badly written punchline, but Lyle's new book is no laughing matter. Actually, that's a lie. It's funny as hell." -- The Big Thrill

"In Deep Six, gifted storyteller D.P. Lyle has crafted yet another winner. A comedic thriller that weaves through the Gulf Coast with wild abandon. This book has it all, memorable characters, a stunning plot, and as always, Lyle's impeccable sense of place. Bravo!" -- Philip Donlay, best-selling author of the Donovan Nash series

"Lyle debuts a new series starring Jake Longly, former baseball player, now reluctant PI working for his father. Assigned to watch a wealthy woman believed to be having an affair, he quickly learns that her paramour is Jake's own ex-wife's new husband. Then the woman is murdered, and Jake, who has a mouth that speaks before his brain has time to think, finds himself in deep trouble. Readers who enjoy smart-mouthed PIs like Robert Crais' Elvis Cole will want to watch this series develop." -- Booklist

"Readers will love Jake Longly--ex-big league ballplayer, beach bar owner, and reluctant PI, and the sharply defined ensemble of characters in Deep Six is just as outstanding. Page turning action and knock out dialogue from a master craftsman and story teller. I devoured this one!" --Robert Dugoni, #1 Amazon and New York Times best-selling author of Her Final Breath

"The final scene on Borkov's massive yacht is one to remember." -- Book Loons

"The mix of quirky characters and some brutal acts of violence should offer plenty of grist for fans of the hard-boiled genre." -- Publishers Weekly

"We all know Lyle's erudition and expertise - but who knew he was this funny?" -- Lee Child, New York Times best-selling author of Make Me

D. P. Lyle, MD is the Macavity Award-winning and Edgar Award-nominated author of many fiction and non-fiction books, short stories, and essays. He has worked with many novelists and with the writers of popular television shows such as Law & Order, CSI: Miami, Diagnosis Murder, Monk, Judging Amy, Peacemakers, Cold Case, House, Medium, Women's Murder Club, 1-800-Missing, The Glades, and Pretty Little Liars. For the past 35 years, he has practiced cardiology in Orange County, California. --This text refers to the paperback edition.

4.3 out of 5 stars
4.3 out of 5
542 global ratings
How are ratings calculated?
To calculate the overall star rating and percentage breakdown by star, we don’t use a simple average. Instead, our system considers things like how recent a review is and if the reviewer bought the item on Amazon. It also analyses reviews to verify trustworthiness.

Marg Clark
4.0 out of 5 stars Great PI murder/mystery
Reviewed in Australia on 3 November 2019
Verified Purchase
Great start to the book with Jake getting on the wrong side of his ex, only to find himself in a new relationship because of it. A murder goes down & the PI group find themselves in the thick of it.
Read more
Helpful
Report abuse

Rchiz
5.0 out of 5 stars A tale told well
Reviewed in Australia on 2 November 2019
Verified Purchase
A light and amusingly good story. Never boring as it's written at a quick readable pace. Well worth your time.
Read more
Helpful
Report abuse

Kindle Customer
5.0 out of 5 stars High and fast moving drama
Reviewed in Australia on 16 March 2020
Verified Purchase
Another fast action thriller with Jake Longly. A rather nasty character is behind several murders as he tries to improve his business interests at the expense of his immediate opposition. Jake and his new girlfriend, Nicole, are dragged into the centre of all the action when they become involve e with the spouse of a murdered wife targeted by the villain. Highly commendable read. Very hard to put down. Would recommend to all lovers of fast action novels. Must read
Read more
Helpful
Report abuse

Kindle Customer
5.0 out of 5 stars 5 stars
Reviewed in Australia on 8 January 2020
Verified Purchase
The first book I have read by this author and thoroughly enjoyed it interesting until the end. Even had a bit of humour
Read more
Helpful
Report abuse
See all reviews

Seb Barrow
5.0 out of 5 stars A fun read.
Reviewed in the United Kingdom on 5 February 2020
Verified Purchase
This was an enjoyable read with a lovely touch of humour to go with the thriller elements. Jake is a bit of a lad with a father who is a PI and they get mixed up in a standout which turns to murder. Now the fun begins and the seriousness of dealing with a man who will stop at nothing to enlarge his illegal empire becomes apparent.
Well written and thoroughly enjoyed this novel. Look forward to meeting Jake in the next book.
Read more
Report abuse

mackenzie
3.0 out of 5 stars Fairly Predictable
Reviewed in the United Kingdom on 11 January 2021
Verified Purchase
I'm so tired of the similarities in these crime books,hero Cop or PI is always over 6 feet and devilishly handsome and always meets a gorgeous girl straightaway and they have mind-blowing sex every half hour,it really spoils the story for me as it's in almost every single book so disappointing.
Read more
Report abuse

sam bunch
5.0 out of 5 stars Fast paced pleasure
Reviewed in the United Kingdom on 5 November 2019
Verified Purchase
A very enjoyable read which maintained its high standard throughout. A page turner that's well worth reading and has you rooting for the good guys.
Read more
Report abuse

Susan burns
5.0 out of 5 stars Deep six
Reviewed in the United Kingdom on 5 November 2019
Verified Purchase
Well what can I say this book was brilliant from start to finish and would definitely recommend to other readers and friends
Read more
Report abuse
See all reviews
Back to top
Get to Know Us
Make Money with Us
Let Us Help You
And don't forget:
© 1996-2021, Amazon.com, Inc. or its affiliates