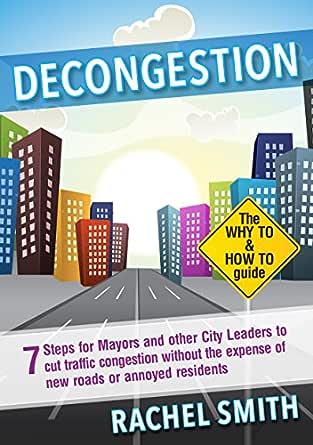 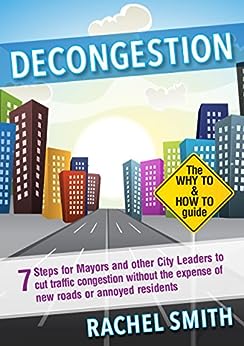 Do you want to be the Mayor or City Leader who cut traffic congestion?
Do you want to be remembered for solving a major problem that is costing everyone money and wasting people’s precious time?
Do you want to be re-elected and leave a legacy where you live and work?
Right now governments and councils cannot afford the cost of new transport infrastructure, and low density suburban sprawl is creating complex and highly expensive transport demands. Many of us are spending more than 15 hours a week in our cars, and the average family spends more time sitting in the car than around the dining table. Little wonder our cities, our lives, our time, our economy and our health are in crisis.
In this ground-breaking and entertaining book, Rachel Smith reveals her Seven-Step Program for decongesting your town or city without the expense of new roads and annoyed residents. This is the first urban transport book that people can use, not just agree with. Decongestion examines in detail:
• the problems caused by too many cars
• opinions from mayors, industry leaders, academics, residents and others
• the seven biggest challenges in cutting traffic congestion
• the seven “sticking points” when creating change
• the seven steps to a decongested city.
Packed with case studies, stories, information and practical exercises, Rachel shows you how to apply the seven steps to decongest your city. The future belongs to those who believe in the beauty of a decongested city – and the reality that none of us will be stuck in traffic ever again.
Rachel Smith is an Author, Blogger, Speaker and a Transport Planner. She has spent the last 15 years working in transport planning in the private and public sectors in the UK and Australia. She increased walking to school from 38% of all trips to 92% at two schools in the UK and was retained by the UK Government for six years as a specialist adviser. She has spoken at more than 200 conferences around the world, including two TEDx talks, and her work has appeared in international media including the ABC and BBC. She was hand-picked to be part of the BMW Guggenheim Lab and has won many awards, including the CIHT BP Road Safety Award.
click to open popover