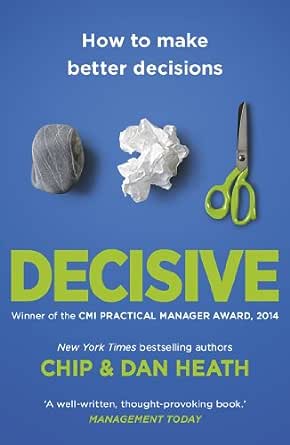 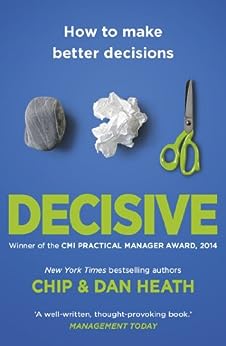 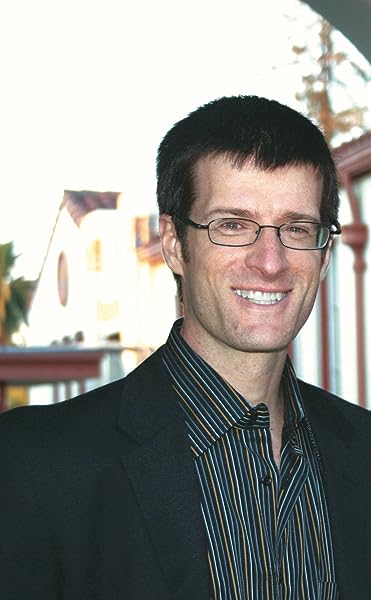 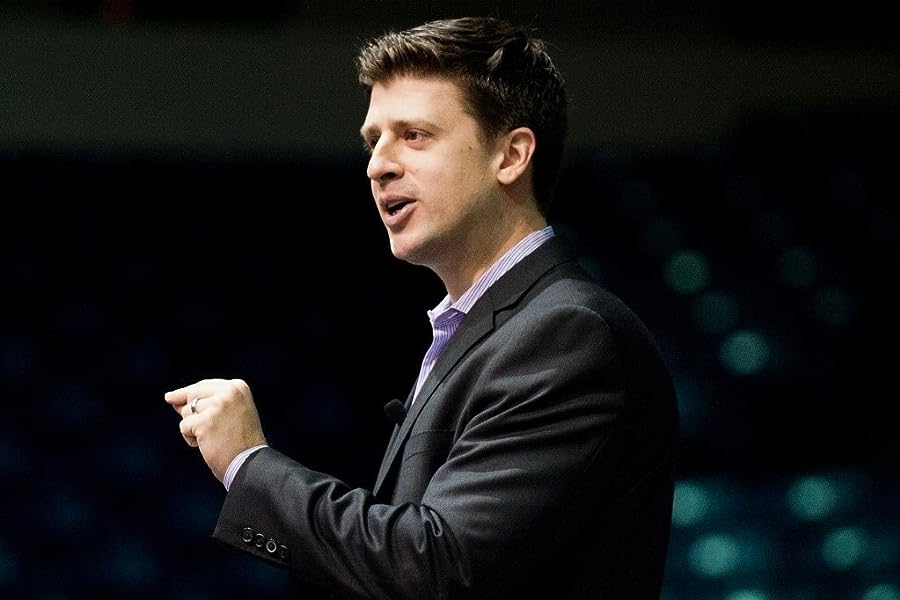 Decisive: How to make better choices in life and work Kindle Edition

"A leader's most important job is to make good decisions, which--minus perfect knowledge of the future--is tough to do consistently...The Heath brothers explain how to navigate the land mines laid by our irrational brains and improve our chances of good outcomes." -Inc.

Science has shown that the formulas our brains use to decide simplify things, but the mental shortcuts often are not in our best interests. Cognizant of this, the questions then becomes: How do we overcome these innate predilections and decide better? Decisive illustrates four specific strategies.

The four strategies are W.R.A.P.: Widen Your Options, Reality Test Your Assumptions, Attain Distance Before Deciding and Prepare to Be Wrong. The book proceeds linearly through W.R.A.P. and each section goes into detail about how a specific strategy can help you to decide better. Furthermore, within each section, sub-strategies are detailed that explain the critical building blocks you will need when deciding.

Also located throughout Decisive are ‘clinics’ that pose a question and invite you to apply what you’ve learned to a case study. For those who just want to get straight to the point, each chapter ends with a one-page summary of bullet points.

The only negative comment I have about this book is that it is told through many, many stories. Decisive is a non-fiction book but at times it feels like you are reading a fiction novel about a series of characters who had to navigate through tough scenarios. It’s understandable why the authors did this (because stories are memorable, impart knowledge and inspire to act), but it felt as if they went overboard at times. The hardcover is 300 pages and I would presume over 100 of those pages consist of the stories alone.
Decisive is the third book (Switch and Made to Stick) from Chip and Dan Heath that I have read and the sole reason why I bought Decisive is because of the others. All three books are insightful, practical, and have significant overlap, so whether you are a business leader, a chef, a or a Sunday school teacher, there will be something for you to learn and apply.

Essentially, reading all three will show you how to develop a lasting idea that people will believe in, care for, and take action on (Made to Stick); how to materialize that idea into transformative change (Switch); and how to navigate along the path you have chosen in your personal life and job (Decisive).

Wally Bock
5.0 out of 5 stars Best Book I've Read on Decision Making - Simple Process with Many Tools to Make the Process Work
19 December 2018 - Published on Amazon.com
Verified Purchase
Chip and Dan Heath open their book, Decisive: How to Make Better Choices in Life and Work describing a woman considering whether to fire her firm’s IT Director. They ask you to reflect on your mental activity as you read their description. Next, they tell you what you probably did. They nailed that part for me. Finally, they show you why what you did, and what most people do, may not lead result in good decisions.

Here’s a summary of the book’s subject in two quotes from the introduction.

“Kahneman says that we are quick to jump to conclusions because we give too much weight to the information that’s right in front of us, while failing to consider the information that’s just offstage. He called this tendency “what you see is all there is.” In keeping with Kahneman’s visual metaphor, we’ll refer to this tendency as a “spotlight” effect. (Think of the way a spotlight in a theater directs our attention; what’s inside the spotlight is crisply illuminated.)”

“And that, in essence, is the core difficulty of decision making: What’s in the spotlight will rarely be everything we need to make a good decision, but we won’t always remember to shift the light. Sometimes, in fact, we’ll forget there’s a spotlight at all, dwelling so long in the tiny circle of light that we forget there’s a broader landscape beyond it.”

Decisive describes how you can make better decisions by following a simple process. The Heaths share research that shows that process is more important than analysis when reaching effective decisions. In fact, a good process can lead to better analysis.

They describe what they call the four villains of decision-making. The villains are: narrow framing, confirmation bias, short-term emotion, and overconfidence. They share a four-step process you can use to lessen the effect of the four villains.

I like the simple process represented with a few letters. The military does the best job I know of in teaching people how to decide. One key to their method is to define a simple process for analyzing an issue. The Army uses an analysis tool called METT-TC. That stands for: Mission, Enemy, Troops available, Terrain, Time, and Civilian concerns. The simple process helps a decision maker consider all the important factors.

The Heaths’ tool is a little different. They use the acronym WRAP. Each letter of the acronym represents a way to deal with one villain of decision-making. W is for “Widen your options.” R stands for “Reality-test your assumptions.” A represents “Attain distance before deciding.” And P is “Prepare to be wrong.”

Each of those elements of their process gets several chapters’ worth of coverage. The authors illustrate their points with relevant, well-told business stories, some of which you probably haven’t heard before. The Heaths also introduce several tools you can use to make the process work better. I found tools I was already familiar with, such as pre-mortem. There were tools I knew about but which had slipped away from the front of my memory. An example is Suzy Welch’s 10/10/10. And there were tools I never heard about such as book-ending.

Decisive: How to Make Better Choices in Life and Work is one of the best books I’ve read on decision-making. The Heaths created a simple process with an acronym to help you remember it. Then they present an array of tools to help you make the process work. If you want to improve your decision-making, or even if you think you don’t need to, this book is a must-read.
Read more
17 people found this helpful

fchbfd
4.0 out of 5 stars Pretty helpful
3 October 2017 - Published on Amazon.com
Verified Purchase
I'm a disaster at decision-making, so this book was really helpful. The most surprising part was the idea that if you're wrestling with a decision between two options, do both! Eventually one of them will fall by the wayside, if necessary. I've already used this idea and it worked out flawlessly, with no endless agonizing necessary.

Since I'm not an executive, the business-related stuff was less helpful, and there are so many ideas in there that I'm not totally sure how best to apply them all, but it's an easy read with a lot of helpful ideas supposedly backed by research.
Read more
8 people found this helpful

Danny Ellis
4.0 out of 5 stars A good manual with great examples and stories for how to improve decision making
23 July 2017 - Published on Amazon.com
Verified Purchase
We all make hundreds of decisions per day and most of the time don't realize how important some of these decisions can be. Many times we avoid the decision and just continue about our lives as if nothing happened because we are worried to act. This book is extremely helpful with both small, day to day decisions and large career changing decisions. Definitely a must read for entrepreneurs. I would also recommend it to kids planning for college. Would have been great to have when I was making those life long decisions. Highly recommended
Read more
7 people found this helpful

TL
2.0 out of 5 stars This book feels incredibly padded, and one of the few books I was unable to finish
21 May 2019 - Published on Amazon.com
Verified Purchase
You will be given example after example after example to explain concepts that are extremely rudimentary. Metaphors and examples are useful in making complicated or difficult concepts easier to grasp. However, with ideas this commonplace and simplistic, they just waste your time. Truly a book that could've been a three page (or less) article.
Read more
4 people found this helpful
Go to Amazon.com to see all 456 reviews 4.6 out of 5 stars
Get FREE delivery with Amazon Prime
Prime members enjoy FREE Delivery and exclusive access to movies, TV shows, music, Kindle e-books, Twitch Prime, and more.
> Get Started
Back to top
Get to Know Us
Make Money with Us
Let Us Help You
And don't forget:
© 1996-2020, Amazon.com, Inc. or its affiliates