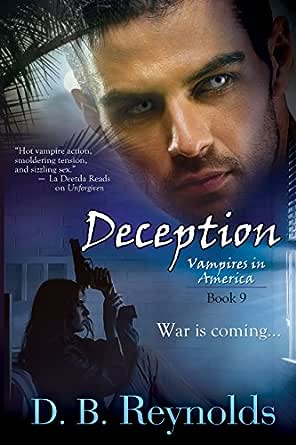 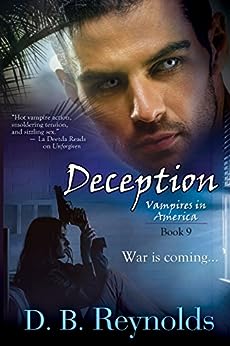 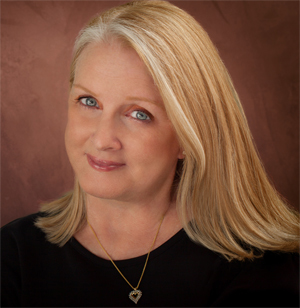 “D.B. Reynolds has outdone herself with this exhilarating story.”—Fresh Fiction on Vincent

Kauai, Hawaii—tropical paradise, vibrant jungle, turquoise sea . . . and sensuous nights that hide vampires so powerful they can change the world.

Raphael—powerful, extraordinary, arrogant. He’s been eliminating rivals and gathering allies, determined not just to survive, but to demolish the Europeans who think they can steal what he’s worked for centuries to create. In a final bid to avert a war that seems inevitable, Raphael agrees to meet an enemy he knows of old. She is formidable, wily, and not to be trusted. But in his arrogance, Raphael believes he can foil whatever treachery she has brewing.

Cynthia Leighton—Raphael’s human mate, beautiful, smart, and deadly when threatened. She doesn’t trust anyone, much less a powerful vampire claiming to want peace. So while Raphael prepares to negotiate a treaty, Cyn is preparing for the inevitable double-cross that she knows is coming. Raphael worries about saving thousands of vampire lives. She only cares about one, and she will do anything to keep him alive and in her arms.

When Cyn is proven right, when it all falls apart and Raphael’s enemies draw on ancient magic to trap him, taking him away from Cyn and out of the war, it all falls to her—to find Raphael, to save the thousands of vampires who will die if she doesn’t succeed . . . and to kill every single being, human or vampire, who gets in her way.

D. B. Reynolds is the RT award-winning author of the popular Vampires in America series of Paranormal Romance/Urban Fantasy, and an Emmy-nominated television sound editor. She lives in a flammable canyon near Los Angeles, and when she’s not writing her own books, she can usually be found reading someone else’s.

Emma
2.0 out of 5 stars What happened?
31 December 2015
Format: Kindle EditionVerified Purchase
When did Cynthia turn into a clingy whiner? One minute she is setting up alternate plans for when everything goes wrong and the next she is weepy because Raphael doesn't want her at the meeting and needs her to stay out of sight. "Don't you trust me" she asks. Why did Raphael need to explain there was a reason for it? She was a really strong independent character in the beginning of the series now she is clingy and sex starved and saying she can't go on if he dies.......yawn.
Read more
Helpful
Comment Report abuse

Kayleen
5.0 out of 5 stars I love Cyns playfulness, I do laugh out loud at times
31 January 2019
Format: Kindle EditionVerified Purchase
Fantastic read, I just could not put the book down.
Story line is great and kept wanting to turn the pages.
Read more
Helpful
Comment Report abuse

Amazon Customer
4.0 out of 5 stars Loved it
2 July 2016
Format: Kindle EditionVerified Purchase
I loved this book, love a strong female lead! Sure abit of sex but more of a sorry line than other books I've read!
Read more
Helpful
Comment Report abuse

Evampire
TOP 500 REVIEWER
5.0 out of 5 stars Deception
4 May 2015
Format: Kindle Edition
The enemies have used ancient magic to trap Raphael and it falls on Cyn to find him, save thousands of vampires and kill every one who gets in her way in this thrilling paranormal romance.

The enemy has made the first move - one that could take Raphael out of the war but they didn't count on his mate or the plans that Raphael and his allies have made for just such an event and the reader can't help but get caught up in all the emotional turmoil as well as the deadly purpose that flows from the pages as Cyn sets about finding her vampire. Cyn and Raphael have taken readers by storm since the beginning of the series and this one is no exception as they demand that the readers stand at their side as they make their stand. The relationship between Raphael and Cyn is still growing strong with some hot and steamy encounters and that's not all the romance as Elke has attracted quite the hot sounding suitor.

A fast paced and smooth flowing plot full of suspense, action and romance keeps readers on the edge of their seat with spine tingling expectation and excitement building throughout the story as the battles begin. The well written scenes and details paint vivid images that capture the imagination and the reader can practically feel the energy and emotions that vibrates from the characters as set out to turn the tables on the ones who dare mess with them and the well orchestrated events ensure that there is never a dull moment along with unexpected twists that surprises the reader as well as the characters - Cyn certainly gets a surprise from the past.

This series just keep getting better and better and I never want to put the books down once I start reading them and I have decided that while Raphael and Cyn edge just a little bit above everyone else, I don't really have a favorite character because I love them all and I can't wait to meet this newest one - Christian.
Read more
Helpful
Comment Report abuse
See all 5 customer reviews
Write a customer review

Go to Amazon.com to see all 207 reviews 4.8 out of 5 stars
Get FREE delivery with Amazon Prime
Prime members enjoy FREE Delivery and exclusive access to movies, TV shows, music, Kindle e-books, Twitch Prime, and more.
> Get Started
Back to top
Get to Know Us
Make Money with Us
Let Us Help You
And don't forget:
© 1996-2020, Amazon.com, Inc. or its affiliates