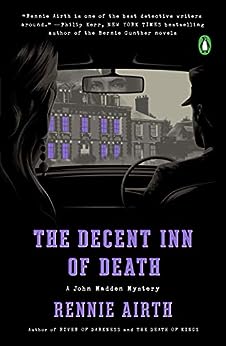 Outstanding.--Publishers Weekly (starred) "[The Decent Inn of Death] is a locked-room murder mystery that rivals the best of Agatha Christie, Ruth Rendell or P.D. James."--BookPage "Move over, Inspectors Alleyn, Dalgliesh, and Morse, and make room for John Madden in the pantheon of great, civilized English sleuths."--The New Yorker "Madden is seamlessly admirable...In an era when our real-life heroes tend to have feet of thick, grubby clay, it can be bracing to spend time with a man who is naturally but not implausibly noble."--The Washington Post Book World "[Airth's] meticulously detailed procedural mysteries are beautifully written... well worth reading, and rereading, whenever we're engaged in war."--Marilyn Stasio, The New York Times "One of the best mysteries in years."--The Boston Globe "Airth writes with arresting authority and compassion...a major talent."--Chicago Tribune "It's the tactics and the terrain, the morale and the characters that make the difference between an average thriller and one as good as this."--The New York Times Book Review --This text refers to the paperback edition.

Rennie Airth was born in South Africa and worked as a foreign correspondent for Reuters before becoming a novelist. He is the author of the John Madden mysteries, including River of Darkness, a finalist for the Edgar Award for Best Novel and a Macavity Award for Best Mystery and a New York Times Notable Book, and The Blood-Dimmed Tide. He lives in Cortona, Italy.

4.4 out of 5 stars
4.4 out of 5
288 global ratings
How are ratings calculated?
To calculate the overall star rating and percentage breakdown by star, we don’t use a simple average. Instead, our system considers things like how recent a review is and if the reviewer bought the item on Amazon. It also analyses reviews to verify trustworthiness.

Madeleine C-W
5.0 out of 5 stars Like Meeting Up With Old Friends
Reviewed in the United Kingdom on 10 September 2020
Verified Purchase
I thoroughly enjoyed this 6th outing of the John Madden series and the characters from the previous books all in situ (Angus Sinclair, Billy Styles, Lily Poole et. al). Another gripping plot and page turner; I hope there will be a 7th outing, whilst checking on Amazon for any indication of a 7th I noticed he'd written a stand alone book called Cold Kill so have bought it
Read more
Report abuse

Compulsive reader
5.0 out of 5 stars Not just another detective series
Reviewed in the United Kingdom on 23 January 2020
Verified Purchase
Another riveting read. Please don't make me wait so long for the next one.
Read more
One person found this helpful
Report abuse

WJF
5.0 out of 5 stars Read the other books in series as sometimes there can be an odd reference made!
Reviewed in the United Kingdom on 4 January 2021
Verified Purchase
Cannot review as not read yet! Prev books in John Madden seriex really enjoyed!
Read more
Report abuse

JAMES E STANKIEWICZ
5.0 out of 5 stars Excellent Inspector Madden Mystery
Reviewed in Canada on 13 October 2021
Verified Purchase
Another great read in the Inspector Madden Series.
I hope there are more to come.