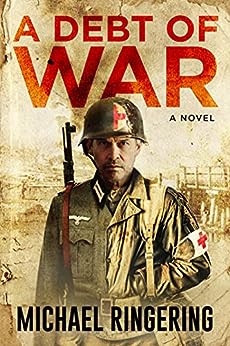 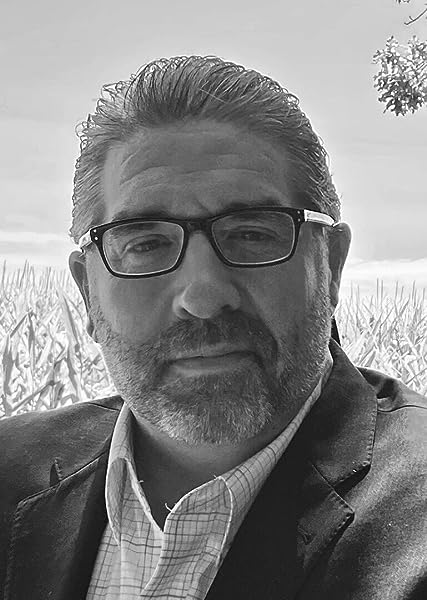 A Debt of War Kindle Edition

A dying wish and a mysterious manuscript bring to light a heart-rending tale of one soldier’s undying commitment to pay a debt owed, transcending both ideology and racial divide, leading to the ultimate price paid.

“Michael Ringering weaves a beautifully layered story, against the most extreme of circumstances, reminding us that what we share will always be more powerful than contemporary forces that would seek to divide. A Debt of War is truly a masterful and timeless piece.” ~ Lt. Col. Casey Grider, United States Air Force

At his mother’s funeral, Paul Bacca, an accomplished publisher, is approached by a mysterious decorated military veteran who claims to have been sent at Paul’s mother’s final request: deliver an unpublished manuscript of the only novel written by an acclaimed poet.

Paul subsequently discovers a shocking family secret that forever changes his life and those of his siblings. The propulsive, gut-wrenching story Paul reads details an inconceivable friendship, a tale of lives forever entwined in a debt owed between enemies.

EVOLVED PUBLISHING PRESENTS a story of fear and honor, life and death, war and humanity, in a journey binding World War II history to a modern-day family. [DRM-Free]

AUTHOR: Michael was born in Alton, IL, and raised in nearby East Alton, where he graduated from East Alton-Wood River High School in 1984. He is a 1989 graduate of Murray State University, earning a bachelor's degree in business administration. Following a 14-year career working in media relations and communications in Major League Baseball, he entered the healthcare industry where he serves as a surgical specialty administrator. Michael and his fiancée, Jackie, reside in Southern Illinois, with their own menagerie of animals including dogs, goats, horses, and chickens. --This text refers to the paperback edition.

When he was in the third grade at East Alton Elementary School, East Alton, IL, Michael Ringering selected Miriam E. Mason’s Broomtail for a class-assigned book report, and from that moment on, set his sights on writing short stories and other works of fiction.

He published his first novel, Six Bits, in December 2011, earning finalist designation in the 2012 USA Best Book Awards for Fiction. Since then he’s published four short stories: Willy the Whale (2017), A Face on a Train (2017), A Calico Tale (2018), and The 9:15 to Grand Central (2019). Michael’s second novel, A Debt of War, is now available for sale. In December 2017, he started his third novel, a trilogy concept based on a childhood memory, and continues to work on several shorts.

Michael was born in Alton, IL, and raised in nearby East Alton, where he graduated from East Alton-Wood River High School in 1984. He’s a 1989 graduate of Murray State University, earning a bachelor’s degree in business administration. Following a 14-year career working in media relations and communications in Major League Baseball, he entered the healthcare industry where he serves as a healthcare administrator.

Michael and his fiancee, Jackie, reside in Southern Illinois with their dog, Victoria, three goats, Macey, Abby and Annie, two horses, Lilly and Sophie, and a slew of chickens.

JB
5.0 out of 5 stars Engaging and Well Written
Reviewed in the United States on 15 October 2021
Verified Purchase
This novel kept me highly engaged. I found myself enveloped in the author’s ability to put the reader right in the middle of scene that was taking place. Clearly a talented writer who fully develops his characters amd does his research about the time period he’s describing. Great Read!
Read more
One person found this helpful
Report abuse

Jan
5.0 out of 5 stars A Debt of War
Reviewed in the United States on 19 October 2021
Verified Purchase
I really enjoyed the suspense the author created throughout the book. A story with morals and refreshing look at honor.
Read more
Report abuse

John Pearson
5.0 out of 5 stars Compelling story - a “story within a story”
Reviewed in the United States on 21 October 2021
Verified Purchase
The author did his background research well for the historical context of the story, with the story itself improbable, perpas, but compelling.
Read more
Report abuse

Gmozart12
5.0 out of 5 stars Excellent novel
Reviewed in the United States on 28 November 2021
Verified Purchase
This book was an enlightening look at the travails of war and provided insight into the hearts and souls of combatants who either enlisted or were forced into battle.
Read more
Report abuse
See all reviews
Back to top
Get to Know Us
Make Money with Us
Let Us Help You
And don't forget:
© 1996-2021, Amazon.com, Inc. or its affiliates