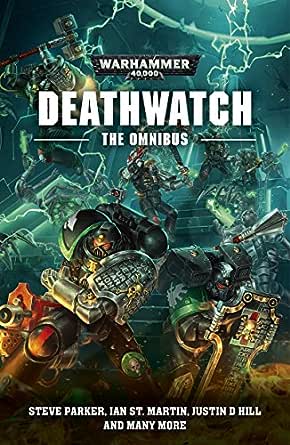 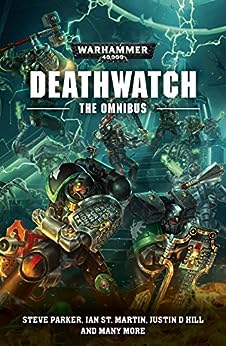 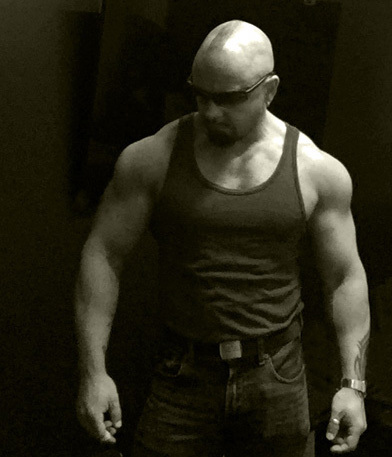 The Deathwatch are the elite. Recruited from numerous Space Marine Chapters, their mission is simple: exterminate any xenos threat to the Imperium. Assembled into kill-teams, the Deathwatch are expert alien hunters, equipped to undertake any mission in any environment. None are as dedicated or as skilled in the brutal art of alien annihilation. This action-packed omnibus contains three full novels written by Steve Parker, Ian St Martin and Justin D Hill, along with a dozen of the best short stories ever written about the Imperium’s premier xenos hunters.

Read it Because
It's a comprehensive collection of the very best Deathwatch stories.

Justin D Hill is the author of the Necromunda novel Terminal Overkill, the Warhammer 40,000 novels Cadia Stands and Cadian Honour, the Space Marine Battles novel Storm of Damocles and the short stories ‘Last Step Backwards’, ‘Lost Hope’ and ‘The Battle of Tyrok Fields’, following the adventures of Lord Castellan Ursarkar E. Creed. He has also written ‘Truth Is My Weapon’, and the Warhammer tales ‘Golgfag’s Revenge’ and ‘The Battle of Whitestone’. His novels have won a number of prizes, as well as being Washington Post and Sunday Times Books of the Year. He lives ten miles uphill from York, where he is indoctrinating his four children in the 40K lore.

Ian St. Martin is the author of the Horus Heresy: Primarchs novel Angron: Slave of Nuceria and the audio drama Konrad Curze: A Lesson in Darkness. He has also written the Warhammer 40,000 novels Of Honour and Iron, Lucius: The Faultless Blade and Deathwatch: Kryptman’s War, along with the novella Steel Daemon and several short stories. He lives and works in Washington DC, caring for his cat and reading anything within reach.

jerome
4.0 out of 5 stars Book 2
11 November 2018 - Published on Amazon.com
Verified Purchase
Second journey into the 40k universe and it was fairly solid. i enjoyed the first couple of novels included in the omnibus but found the last one hard to get through. The short stories were hit and miss, that i feel were more about how easily was able to slide into the writers style then whether or not the story or write was 'good.' Deathwatch are pretty badass. Gives you some insights into inquisition which was great for a new guy like me. Deathwatch: Kryptman's war was probably the highlight for me, as well as the strong finish with the infinite tableau - short.
Read more
2 people found this helpful

Steve H.
4.0 out of 5 stars Not your average omnibus
30 September 2019 - Published on Amazon.com
Verified Purchase
This omnibus includes 3 novels and 12 short stories of the deathwatch. As such don't buy it expecting a concurrent story (like the space wolves omnibus for example). The deathwatch adds a lot of flavor to the normally bland space Marines faction. The interactions between different chapters and the more small scale combat makes it a nice break from the humdrum of the Ultramarines for example. The author variation can also make it a bit jarring to jump between writing styles and content quality but it also makes for a nice variety.
Read more
One person found this helpful

Amazon Customer
5.0 out of 5 stars Just plain awesome
9 August 2018 - Published on Amazon.com
Verified Purchase
Was waiting for the collected works to come out for deathwatch. Hope they continue to do omnibuses.
Read more

Jetpack
3.0 out of 5 stars Novel, 2 novellas and several short stories for WH 40K.
10 December 2017 - Published on Amazon.com
Verified Purchase
A mixed bag for me, but glad I picked it up. I had read Deathwatch (the Parker novel) a while back (and still not a fan of the novel), but do like the 2 short stories better that Parker did. I find the 2 other novellas to be pretty good (the writing improves for me the deeper into the omnibus you get).

Personally, I like the Deathwatch stories the best that aren't the Deathwatch acting as puppets of the Ordo Xenos. Yeah, they have oaths, but the DW doing bad things for bad reasons gets old.


Read more
7 people found this helpful
Go to Amazon.com to see all 5 reviews 4.2 out of 5 stars
Get FREE delivery with Amazon Prime
Prime members enjoy FREE Delivery and exclusive access to movies, TV shows, music, Kindle e-books, Twitch Prime, and more.
> Get Started
Back to top
Get to Know Us
Make Money with Us
Let Us Help You
And don't forget:
© 1996-2020, Amazon.com, Inc. or its affiliates