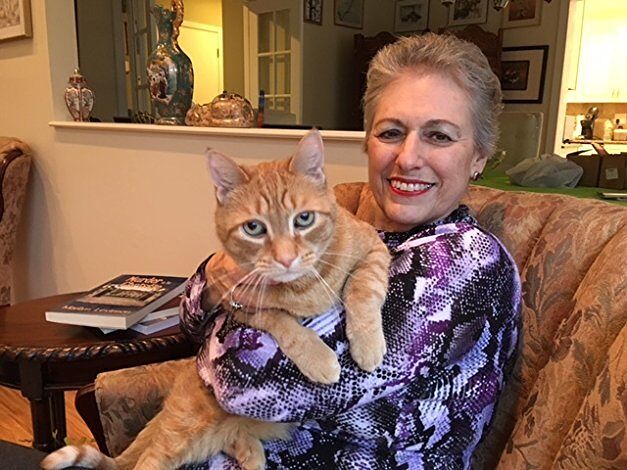 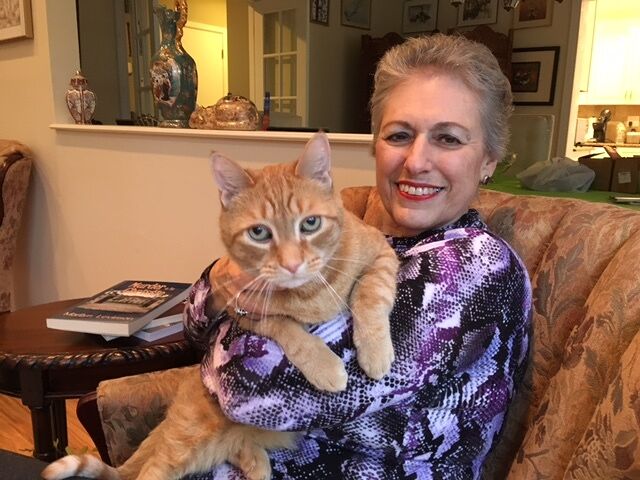 Page 1 of 1 Start overPage 1 of 1
Previous page
Next page
Start reading Death Overdue (A Haunted Library Mystery Book 1) on your Kindle in under a minute.

Allison Brook is a former Spanish teacher that now writes mysteries, romantic suspense, and novels for young readers. She loves traveling, reading, knitting, doing Sudoku, and visiting with her grandchildren, Olivia and Jack, on FaceTime. She lives on Long Island with Sammy, her feisty red cat. This is her first Haunted Library mystery.

4.4 out of 5 stars
4.4 out of 5
176 global ratings
How are ratings calculated?
To calculate the overall star rating and percentage breakdown by star, we don’t use a simple average. Instead, our system considers things like how recent a review is and if the reviewer bought the item on Amazon. It also analyses reviews to verify trustworthiness.

Dallass
TOP 100 REVIEWER
4.0 out of 5 stars Ah, a library mystery 🥰
Reviewed in Australia on 14 March 2019
Verified Purchase
I am a sucker for protagonists who work in a library, and this book was exactly what I was looking for. An intriguing murder mystery, a fun setting - hey, don’t knock it. Libraries are cool! - and some very relatable characters made this so much fun to read.
Read more
Helpful
Report abuse

Martha A. Cheves
5.0 out of 5 stars She’s staying with Great Uncle Bosco and Aunt Harriet
Reviewed in Australia on 11 October 2017
Carrie Singleton is back in Clover Ridge, Connecticut, spiked purple hair and all. She’s staying with Great Uncle Bosco and Aunt Harriet, who offered her a home when her own mother wouldn't. As for her father—for all Carrie knows, he might be back in jail. But it’s time to move on. The job Uncle Bosco has wrangled for her in the Clover Ridge Library is boring and makes no use of her library science degree. Besides, much as she’s grown to love her aunt and uncle, she simply can’t stay in one place very long. She’ll soon turn thirty, and she’s held five jobs in as many states. it’s time to go.

The library director’s offer to be Head of Programs and Events comes as a shock. It would mean drastic changes in Carrie’s lifestyle. No more purple hair. No more black Goth outfits. No more running carefree. She would have responsibilities. Others would be depending on her. She would have to grow up and fast.

The ghost of Evelyn Havers appears and urges Carrie to take the job. Evelyn worked in the library until her death a few years ago. At Carrie's first scheduled event, a retired homicide detective is murdered while talking about a cold case he claims to have solved. Carrie believes the two murders are linked. With Evelyn’s help she sets out to find the murderer.

Allison Brook is one author that I can't get enough of. I've read everything she has written, I think, and have enjoyed them all. When I started Death Overdue, I decided I knew who the murderer was after about 60 pages. Yep, I was wrong. I wasn't surprised when the truth finally came out, but by then I had about 6 suspects. Finishing this book has left room for many more books to come. I can't wait to read them.

Karen Bennett
5.0 out of 5 stars Different
Reviewed in the United Kingdom on 5 January 2019
Verified Purchase
Really liked the way the characters developed in a natural way. Great story that also came to a nice natural conclusion without triteness
Read more
Report abuse

SKD
3.0 out of 5 stars "Death overdue" was a good read
Reviewed in the United States on 8 October 2018
Verified Purchase
I liked the way the author developed this story as it brought the reader in right away. The use of the older relatives was a good plot addition for the main character who has been left with a dysfunctional family and is trying to find her niche as a young career woman. The addition of a library lady ghost was a fun plot turn and made the story a bit different from the usual mystery. Internal library politics note than libraries are not indifferent to office intrigue.

As a devoted library fan, I also appreciated how the author - Allison Brooks - brought in some of the many functions a library now offers from lectures on current events and history to language classes, crafting groups and story telling. And, of course, as with many of the stories in this genre, there is a bit of romance with many leading male possibilities - they do not harm the story and might even enhance it a bit.

A couple of turns did not flow well for me - the attack on the co-workers' father was never well explained nor was the dispute with her over this, resolved plausibly. The threatening phone calls were said to be from a man; this issue was also left hanging.

But all in all if I could have voted it a 3.5 I would have given it a higher rating. I enjoyed the story she wove, found the characters interesting but wished for them to have been developed a bit more. Finally,, I did not solve the mystery before the ending, which to me is always the mark of a good story told well. I see that she has written another book in this series and I do look forward to reading it soon.
Read more
19 people found this helpful
Report abuse

Pamela R Mitchell
5.0 out of 5 stars Fun, fast-paced, must-read for cozy lovers
Reviewed in the United States on 5 December 2017
Verified Purchase
Great series debut of the Haunted Library Mysteries by new-to-me author, Allison Brook with a great cast of characters, well-crafted and fast-paced plot in a charming small town setting. I knew as soon as I started reading that I wouldn't be able to put this book down until I read the last word.

I really liked Carrie Singleton, newly appointed head of programs and events at the local library and her dynamic with the other residents of Clover Ridge, Connecticut, especially the ghost librarian, Evelyn Havers. Carrie feels responsible when retired homicide detective Al Buckley is poisoned during a library presentation where he claims to know who murdered Laura Foster fifteen years ago. She teams up with Laura's son, Jared, to solve both murders.

I can't wait to see what's in store for Carrie in book two and hope we see a bit more of her landlord and possible romantic interest, Dylan Avery. I voluntarily reviewed an advance reader copy of DEATH OVERDUE and enjoyed it so much I purchased a copy for my Kindle.
Read more
11 people found this helpful
Report abuse

A. McGraw
5.0 out of 5 stars Reading to Lighten your Day
Reviewed in the United States on 19 July 2018
Verified Purchase
Death Overdue by Allison Brook is a delightful story.

After being offered a job as the head of a department at a library, Carrie Singleton discovers there’s a resident ghost who knows things and keeps a few secrets. At an event that Carrie sets up, the guest speaker is a retired cop who wants to solve a cold case. Before he can relate new facts in the case, he dies from a poisoning.

Carrie faces a cranky co-worker, a boss whom she can’t quite figure out, and a cold case that she feels requires her attention – not to mention the murder of the cop she took an instant liking to – although this could lead to her own demise.

This book is light reading with a little humor, and I highly recommend it to mystery and cozy mystery lovers. I thoroughly enjoyed it.
Read more
9 people found this helpful
Report abuse

R. Meckley
3.0 out of 5 stars Entertaining cozy mystery
Reviewed in the United States on 27 August 2019
Verified Purchase
This is the first in the cozy mystery series Haunted Library Mysteries. Carrie has returned to her hometown for a visit and ends up staying to take a job at the local public library. The "haunted" part of the series originates with Evelyn Havers, the ghost of a former library employee who died in the library parking lot years ago. Carrie is the only person working at the library who can see and talk to Evelyn, who helps Carrie solve the murders of two local people. As with most cozy mysteries, the amateur sleuth, Carrie, does some rather stupid things to advance the plot. She also doesn't seem at all upset about that ghost, but instead just seems to easily accept her existence. It is an entertaining series, though, and I do enjoy stories set in libraries.
Read more
5 people found this helpful
Report abuse
See all reviews
Back to top
Get to Know Us
Make Money with Us
Let Us Help You
And don't forget:
© 1996-2021, Amazon.com, Inc. or its affiliates