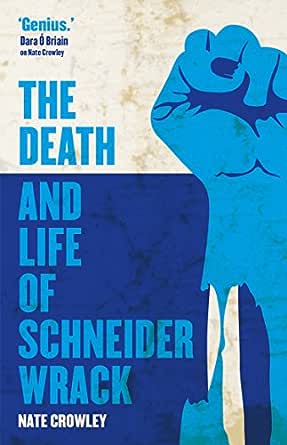 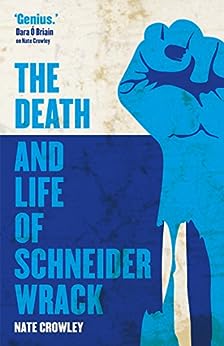 The Death and Life of Schneider Wrack Kindle Edition

Schneider Wrack was dead. Until he wasn’t.

Convicted of a crime he’s almost completely sure he didn’t commit, executed, reanimated, then pressed into service aboard a vast trawler on the terrible world of Ocean, he was set to spend his afterlife working until his mindless corpse falls apart.
But now he’s woken up, trapped in a rotting body, arm-deep in the stinking meat and blubber of a sea monster, and he’s not happy. It’s time for the dead to rise up.

Chris
4.0 out of 5 stars Fun world building and a unique take on zombies
22 May 2018 - Published on Amazon.com
Verified Purchase
“The Death and Life of Schneider Wrack” took me wholly by surprise. What I expected was yet another zombie novel with a bit of humor thrown in. What I got was non-stop world building, and although it features a portrayal of zombies I can’t say I’ve seen elsewhere, manages to be a lot more than another zombie novel.

A couple of criticisms: 1) the author spends the first quarter of the book throwing in way too many 5-dollar words and 2) while impressively expansive, it still has some telltale signs of being a first novel and doesn’t quite stick the landing.

Among my horror reading club, this one has been quite polarizing, but I’m glad I gave it a read. A must for horror fans who like dry British humor or lots of world building.

P. Wheeler
5.0 out of 5 stars Completely insane plot
1 November 2019 - Published on Amazon.com
Verified Purchase
I absolately loved it. I found myself laughing aloud frequently, wondering how this delightfully demented author came up with this story. More, please!
Read more

Susan Harley
5.0 out of 5 stars Bruised bubbly bleeding buddy band.
14 December 2017 - Published on Amazon.com
Verified Purchase
Excellent story abounding with wit, strange creatures that could be us, and a plot to die for. Read it on the Kindle to enjoy the colorful vocabulary.
Read more

R. HOOVER
1.0 out of 5 stars Don’t waste your time on it.
20 May 2018 - Published on Amazon.com
Verified Purchase
The worst novel ever written. Unintelligible gibberish.
Read more
One person found this helpful

Kim D
4.0 out of 5 stars If you love imagining massive creatures with names you can barely hold in your brain, dive in.
8 September 2017 - Published on Amazon.com
Review courtesy of All Things Urban Fantasy

I tried to read THE DEATH AND LIFE OF SCHNEIDER WRACK with my speed reading app but there were so many words that were gigantic or outright invented there was no way that my eyes could keep up at 300 and 400 words a minute. I'm glad I slowed down; when I did I started really enjoying this book that is more akin to Alice In Wonderland than it is to most other zombie books.

Zombies in this book are one part steampunk wonder, one part magical mystery, and all horrific. They bear the marks of their execution method but also the wear of the work they do. They are sun baked, missing limbs and often preyed upon by the giant ocean creatures they are tasked with hunting. It was so much fun to have them evolve from creatures described as "one arm" or "the fat man" into characters with names and personalities; even if in one case, all he could say was "Fawk offff!!!".

In a book where the main characters are passionate and real, it's strange that it's the setting that steals the show. The world of Ocean and the fishing boat expands, bit by bit, as Wrack and his commerades fight back, learning new things about the various people, fauna and unknowns that inhabit their world.

THE DEATH AND LIFE OF SCHNEIDER WRACK is a trip, a book to read carefully but not too slowly. If you're the kind of person who looks up words in the dictionary, don't bother. If you love imagining massive creatures with names you can barely hold in your brain, dive in.

Read more
5 people found this helpful
Go to Amazon.com to see all 7 reviews 3.8 out of 5 stars
Get FREE delivery with Amazon Prime
Prime members enjoy FREE Delivery and exclusive access to movies, TV shows, music, Kindle e-books, Twitch Prime, and more.
> Get Started
Back to top
Get to Know Us
Make Money with Us
Let Us Help You
And don't forget:
© 1996-2020, Amazon.com, Inc. or its affiliates