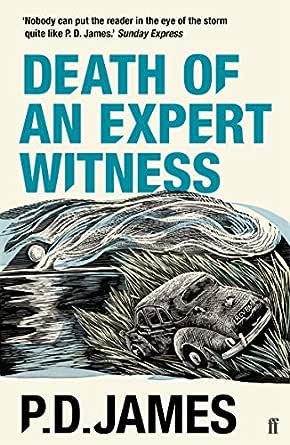 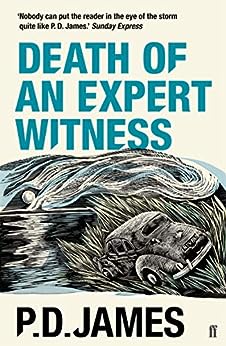 'The greatest contemporary writer of classic crime.' Peter Kemp, Sunday Times 'P. D. James is one of the national treasures of British fiction... Each new book gives pleasure not just for macabre crimes or ingenious solutions but its density of experience.' Malcolm Bradbury, Mail on Sunday 'Unlike so many crime writers, James still has the power to move, fascinate and astonish.' Independent 'James... manages to invest even a simple mystery novel with a depth and intelligence that few in her trade can match.' The Times

From P.D. James, one of the masters of British crime fiction, comes the seventh Adam Dalgliesh novel, set against the bleak fens of East Anglia. Death of An Expert Witness is a classic work of detective fiction packed with forensic detail, intrigue and suspense.

When a young girl is found murdered in a field, the scientific examination of the exhibits is just a routine job for the staff of Hoggatt's forensic science laboratory. But nothing could have prepared them for the brutal death of one of their own. When the senior biologist is found dead in his laboratory Commander Dalgliesh is called to the bleak fens of East Anglia, where the murderer is lying in wait to strike again.

With a wealth of potential suspects and cautious forensic scientists quick to pass on the blame, Dalgliesh becomes embroiled in the complicated passions that lie hidden beneath the calm surface of the laboratory.

From PD James, the bestselling author of Death Comes To Pemberley, Children of Men and Death in Holy Orders, comes an atmospheric and thrilling work of detective fiction set in a forensic laboratory on the bleak fens of East Anglia. This novel was adapted into an ITV television series in 1983 and starred Roy Marsden, Geoffrey Palmer and Ray Brooks.

Ian Robert Kerr
5.0 out of 5 stars P D James at her best
Reviewed in Australia on 18 May 2015
Format: Kindle EditionVerified Purchase
An excellent plot with some fascnating twists. The use of forensic science in an investigation involving forensic scientists adds to the intrigue.
Read more
One person found this helpful
Helpful
Comment Report abuse

Amazon Customer
4.0 out of 5 stars Very good
Reviewed in Australia on 20 February 2017
Format: Kindle EditionVerified Purchase
Was in the dark till the very end . So was better than the last not too much lead in material.
Read more
Helpful
Comment Report abuse

Sandradan1
4.0 out of 5 stars Violent death might lurk eastwards
Reviewed in the United Kingdom on 1 October 2015
Verified Purchase
What a great title. Ask most people to name a PD James novel, and this is probably it.

A gloriously convoluted plot surrounding a Fens village, a forensic science laboratory, and a tightly-knit community linked in ways the reader cannot forsee. The clues are there but each is so fleetingly mentioned, so parsimonious, and so intertwined, that you will forget each and discount its importance. When the senior biologist at Hoggatt’s Laboratory is found dead, New Scotland Yard is called in. Commander Adam Dalgliesh arrives with Detective Inspector John Massingham; it is not the easiest of working partnerships, another layer of grit added to the oyster.

PD James’ observations are at times heart-rending. Of a victim’s elderly father: “The old man sat there, staring straight ahead. His hands, with the long fingers like those of his son, but with their skin dry and stained as withered leavers, hung heavily between his knees, grotesquely large for the brittle wrists.”

The technical detail, at which James is always so reliable, is interleaved here with the writing style I associate with the later Dalgliesh books. On his way to interview a bereaved relative, Dalgliesh stands on high ground and looks towards Hoggatt’s Laboratory. “Under the turbulent painter’s sky, with its changing clusters of white, grey and purple cumulus clouds massing against the pale azure blue of the upper air, and the sunlight moving fitfully across the fields and flittering on roofs and windows, it looked like an isolated frontier outpost, but welcoming, prosperous and secure. Violent death might lurk eastwards in the dark fenlands, but surely not under these neat domestic roofs.” But regular crime readers know that is exactly where crime lurks.

Dalgliesh’s observations, about the process of life and death, the motivation of murder, the role of life of art, of religion, of poetry, are becoming denser in the transition which elevated PD James’ books from crime fiction to literary fiction. There is so much more in her books than murder. “Death, thought Dalgliesh, obliterates family resemblance as it does personality; there is no affinity between the living and the dead.”

The Cosmic Whelk
2.0 out of 5 stars So boring!
Reviewed in the United Kingdom on 3 June 2019
Format: Kindle EditionVerified Purchase
Endless, detailed descriptions of places; slow, slow pace. Too many characters, and none of them likeable. Towards the end I was flipping through the pages, just to finish!
Read more
Helpful
Sending feedback...
Thank you for your feedback.
Sorry, we failed to record your vote. Please try again
Report abuse

donna prowse
5.0 out of 5 stars Five Stars
Reviewed in the United Kingdom on 30 June 2018
Verified Purchase
her books are good i have not yet read this one
Read more
Helpful
Sending feedback...
Thank you for your feedback.
Sorry, we failed to record your vote. Please try again
Report abuse

mad annie
5.0 out of 5 stars As always enjoyable
Reviewed in the United Kingdom on 17 March 2015
Format: Kindle EditionVerified Purchase
As usual a well written well conceived plot tho' at times I found the text a bit dense.
Read more
Helpful
Sending feedback...
Thank you for your feedback.
Sorry, we failed to record your vote. Please try again
Report abuse

Mavis Thompson
5.0 out of 5 stars Good read
Reviewed in the United Kingdom on 1 November 2016
Verified Purchase
Good story as always from P.D James. I am enjoying it.
Read more
Helpful
Sending feedback...
Thank you for your feedback.
Sorry, we failed to record your vote. Please try again
Report abuse

C. Ebanks
2.0 out of 5 stars Let down ending
Reviewed in the United Kingdom on 3 July 2016
Format: Kindle EditionVerified Purchase
Good start to this book but it waned towards the end and became confusing in some parts but likable enough
Read more
Helpful
Sending feedback...
Thank you for your feedback.
Sorry, we failed to record your vote. Please try again
Report abuse

jac
4.0 out of 5 stars PD James novels
Reviewed in the United Kingdom on 29 January 2016
Format: Kindle EditionVerified Purchase
I am reading these novels in order and I liked this one the best so far.
Read more
Helpful
Sending feedback...
Thank you for your feedback.
Sorry, we failed to record your vote. Please try again
Report abuse
Load more international reviews

Konnosir
5.0 out of 5 stars Gripping
Reviewed in the United Kingdom on 6 April 2013
Verified Purchase
P D James at her very best - fabulous writing and great story line - what more does anyone want or need?
Read more
Helpful
Sending feedback...
Thank you for your feedback.
Sorry, we failed to record your vote. Please try again
Report abuse

Catlover
5.0 out of 5 stars Easy Listening
Reviewed in the United Kingdom on 2 December 2013
Verified Purchase
Great story and wonderful to listen to David Jayston's voice reading this P.D James novel. I listen to this whilst driving on a longer trip or to make the ironing chore an easier task!!
Read more
Helpful
Sending feedback...
Thank you for your feedback.
Sorry, we failed to record your vote. Please try again
Report abuse