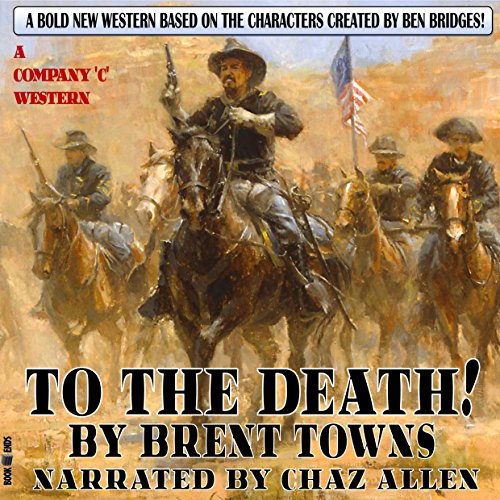 Peter Brandvold
5.0 out of 5 stars Wonderful Cavalry Western!
Reviewed in the United States on 23 April 2017
Verified Purchase
I thoroughly enjoyed TO THE DEATH by Brent Townes, an extension of Ben Bridges' original series. The action is fast and furious and the characters are deftly drawn. If you're a fan of cavalry westerns, as I am, I can't recommend this one enough. I loved the characters and am looking forward to hitting the trail with the same cast all over again. Congratulations, Brent. Keep 'em comin'!
Read more
One person found this helpful
Report abuse

Martha Catoe Peebles
5.0 out of 5 stars Wow!
Reviewed in the United States on 29 April 2017
Verified Purchase
What a great book. It was a awesome read. I truly hope Kelso will stay sober now. He is a great soldier and a true man. I want to thank Brent Towns for a great read.
Read more
One person found this helpful
Report abuse

phil arnold
4.0 out of 5 stars Four Stars
Reviewed in the United States on 13 February 2018
Verified Purchase
Good reading
Read more
Report abuse
See all reviews
Back to top
Get to Know Us
Make Money with Us
Let Us Help You
And don't forget:
© 1996-2021, Amazon.com, Inc. or its affiliates